ALBANY – With the score tied 2-2 in the bottom of the second inning between Southland and Deerfield-Windsor, the Knights’ loaded the bases as a result of a hit batsman and two walks by Raiders reliever Ross Minick. Then Clarke Sullivan stepped to the plate. Sullivan promptly belted a grand slam home run over the left field wall to give Deerfield-Windsor a 6-2 lead. The Knights would go on to defeat the Raiders 9-4 on Tuesday, March 27, at Addison Field.

“Six of the seven innings were really good,” Southland head coach John Brady said. “They scored five in the second, so it was a 4-4 game for the rest of the game. We had the bases loaded in the sixth and we only scored one. Then we had two on in the seventh, and we didn’t score, so we had opportunities, minus the second inning. You take out the second inning, it’s a really good game. That’s a little tough to swallow because we’ve been playing really good ball. They’ve got good team. We made a couple of mistakes. They made it hurt.”

On the positive side for the Raiders, they had some offensive production from several players. Centerfielder Clay Owens went 2-for-5 with two singles, a stolen base and scored a run. Harrison Bell went 2-for-3 with a sacrifice fly RBI, a double and an RBI single.  George Wall reached base three times the painful way. He was hit by a pitch his first three times at bat. His fourth at bat resulted in a single. Landon Law went 2-for-4 with a double in the second and a single in the sixth.

Southland scored first in the top of the first as Clay Owens led off with a single and stole second base. Tyler Kennedy then hit into a fielder’s choice, advancing Owens to third. Then Bell hit a sacrifice fly to score Owens.

The Knights responded with two runs in the bottom of the first. Lead-off hitter Bo Bueschen doubled, then Drew Dixon singled. Jack Kimbrell followed with a sacrifice RBI. After Sullivan hit into a fielder’s choice, Baylin Moore hit an RBI double to give the Knights a 2-1 lead. The Knights eventually loaded the bases with two outs, but reliever Ross Minick was able to get Drew Griffin to ground out to end the threat.

The Raiders tied the game in the top of the second. With one out, Bell doubled and Hunter hit another double, driving in Bell. Ross Minick hit into a ground out, followed by George Wall’s first hit batsman. However, Luke Law struck out to end the inning. 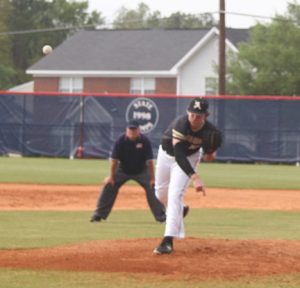 Harrison Bell started on the mound for the Raiders against Deerfield-Windsor.
Photo by Ken Gustafson

The big trouble for Southland came in the bottom of the second inning. With one out in the inning, Bueschen was hit by a pitch, advanced on a passed ball and stole third as part of a double steal by the Knights. Drew Dixon drew a walk and stole second. Then Jack Kimbrell drew a walk. At this point, the bases were loaded with one out for Sullivan. He hit a grand slam home run to give the Knights a 6-2 lead.

However, the Knights were not done as Baylin Moore hit a solo home run to increase the lead to 7-2. Will Hubbard was brought in to pitch in relief of Minick. Hubbard forced Davis Lawson in a ground out and struck out Cole Mitchell to end the inning.

The Raiders were able t to get one run in the top of the third. With one out, Harrison Bell doubled, followed by an RBI double by Hunter McCain. Minick grounded out, followed by George Wall’s second hit batsman. The Raiders had two men on with two out. However, Luke Law struck out to end the inning.

The Knights got two more runs in the bottom of the third. Drew Griffin led off with a walk, followed by a single by Trent Bush. After Bueschen flew out for the first out, Drew Dixon hit into a fielder’s choice, advancing Griffin to third. Then Kimbrell and Sullivan both followed with RBI singles, driving in two runs. That would be all the offense the Knights needed.

The Raiders threatened in the top of the fifth. With one out, Hunter McCain reached on an error by the Deerfield-Windsor third baseman, and advanced to second. After the next batter struck out, Wall was hit for the third time in the game while at the plate. Luke Law then doubled, but McCain was thrown out at third base to end the inning.

The Raiders scored their fourth and final run in the top of the sixth. After Will Hubbard struck out, Landon Law singled. Then Clay Owens flew out. Tyler Kennedy walked, then Bell singled, driving home Law. Hunter McCain then drew a walk, loading the bases again for the Raiders. However, the next batter flew out to end the inning. The Raiders had runners at first and second with two outs in the top of the seventh, but Owens flew out to end the game.

The Raiders are now 4-5 overall and 2-1 in Region 3-AAA. They will get another crack at the Knights when they host Deerfield-Windsor on Thursday, March 29, at Southland Academy. First pitch is scheduled for 4 p.m.