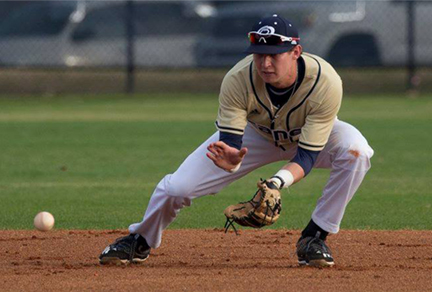 Bradley Hough hit a two-out, two-run single in the top of the ninth to lead the Hurricanes to a 5-4 victory over Valdosta State. Photo by GSW

Junior infielder Bradley Hough delivered a two-out, two-run single in the ninth to give the Hurricanes the victory.

With one on in the top of the first, senior Jared Jones singled up the middle, scoring Jason Baita to give the Hurricanes an early 1-0 lead. The Blazers answered in the bottom of the first with the tying run. VSU then took the lead off a double steal with runners on the corners in the fourth inning. Valdosta State proceeded to score another run with an RBI single to go ahead 3-1.

However, the Hurricanes answered in the seventh. Bradley Hough tied the game with a two-run homer over the left field wall.  In the bottom of the eighth, VSU scored its final run of the game to briefly take a 4-3 lead. However, an inning later, the Hurricanes took the lead for good on the two-out, two-run single by Hough.

The Hurricanes improve to 5-22 on the season while Valdosta State, having won three of its last four, drops to 12-17.

The pitching staff for GSW was solid throughout the game. Junior starter Stewart Tyler scattered six hits over 5 2/3 innings and held the Blazers to three runs. Freshman Jared Donalson allowed one run over 1 2/3 innings of relief before senior Andrew Patrick (1-0) shut down the Blazers for the final 1 2/3 inning to pick up his first win of the season. Patrick struck out two and didn’t allow a hit or run.

GSW returns to conference play when they host Young Harris College (17-13, 10-8 PBC) in a three-game weekend series beginning with a doubleheader on Friday, March 30. Game 1 is expected to start at 1 p.m., followed by the second game at 4 p.m. The third game on Saturday, March 31, is expected to begin at 1 p.m. All of this is weather permitting.