Lady Hurricanes get manhandled in doubleheader with West Georgia 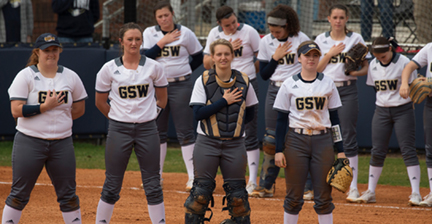 GSW Softball Team standing during the national anthem. They were swept in dominating fashion by West Georgia. Photo by GSW

AMERICUS – After sweeping a doubleheader against Lander University on Sunday, March 25, the GSW Lady Canes Softball Team was riding high on a four-game winning streak. That came crashing to a halt on Wednesday, March 28, when the Lady Wolves of West Georgia came into Americus and swept a doubleheader 14-1 and 9-0.

With the two losses, the Lady Canes drop to 15-20 on the season while West Georgia improves to 19-12.

In the first game, West Georgia scored three runs in the first, three in the third and eight in the fifth to seal the five-inning victory. The Lady Wolves combined for 16 hits off Madason Messer and Brittany Childs. Ashley Ellison and Alley Taylor each had three hits.

Messer (6-2) took the loss for GSW. She gave up three runs, two of those earned, on four hits in the first inning. Katie Foote (8-2) picked up the win for the Lady Wolves.

The second game wasn’t much better for GSW. West Georgia scored six runs in the top of the second inning to take control of the game. GSW starter Ansley Dean was rocked by two home runs: a two-run home run by Lexi Close and a three-run blast by Peyton Stallworth. The Lady Wolves added runs in the third, fourth and fifth innings to take the 9-0 shutout.

UWG starter Raya Moncus held GSW without a hit through 4 2/3 innings before Ansley Dean singled to right field to end the no-hit bid for Moncus. Moncus improves to 3-2 on the season, while Dean, who took the loss, falls to 2-5. Dean gave up six runs on four hits.

The Lady Hurricanes will try to rebound from this latest setback when they return to conference play. They travel to Augusta on Friday, March 30, for a doubleheader against Augusta University. The first game begins at noon, followed by the second game at 2 p.m.