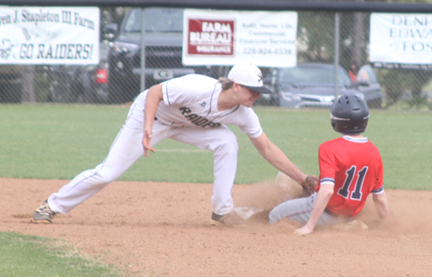 Southland shortstop Hunter McCain puts the tag on Deerfield-Windsor runner Jake Kinney as he is trying to steal second base. Photo by Ken Gustafson

“We had a hard time with their pitching. The guy (Baylin Moore) was really good,” Southland head coach John Brady said. “We had runners all over the place, and to his credit, we never could get a hit. I don’t know how many guys we left on base, but it felt like it was about 35. We had the bases loaded a couple of times. It was good pitching. He made a pitch when he needed to. We just couldn’t get a hit with runners all over the place.”

Brady went on to say that his starting pitcher, Ross Minick, did a great job keeping Southland in the game after a crazy first inning.

That first inning began when the Knights’ lead-off batter, Bo Bueschen, hit a ground ball to shortstop Hunter McCain. McCain booted the ball and made an errant throw past first base, allowing Bueschen to advance to second. Drew Dixon then drew a walk, then Jack Kimbrel singled, advancing the runners to second and third. With the bases loaded and nobody out, Minick threw a wild pitch, allowing Bueschen to score and all the other runners to advance.

Then Minick threw another wild pitch, allowing Dixon to score. Just like that, the Knights had a 2-0 lead.

Clarke Sullivan then grounded out, advancing Kimbrel to third base. Then Baylin Moore3 was granted first base when the umpire called catcher interference against Southland catcher George Wall. Courtesy runner Drew Reich came in to run for Moore. With runners at first and third with one out, Davis Lawson stepped to the plate for the Knights. Minick, however, was able to strike out Lawson for the second out of the inning. Cole Mitchell then popped out to end the top of the first without any more damage.

However, Baylin Moore struck out Clay Owens and Tyler Kennedy to begin the bottom of the second. Harrison Bell drew a walk, followed by a single by Hunter McCain. George Wall was then hit by a pitch, and the Raiders had the bases loaded with two outs. However, Ross Minick couldn’t get the clutch hit the Raiders needed, and flew out to end the inning.

Southland’s Clay Owens up to bat against Deerfield-Windsor.
Photo by Ken Gustafson

In the top of the third inning, Drew Dixon led off with a walk for the Knights. However, Minick was able to get Jack Kimbrel to ground into a double play. Clarke Sullivan then flew out to end the Knights’ half of the inning.

However, Harrison Bell struck out and Hunter McCain grounded out in the bottom of the third. George Wall drew a walk to keep the inning going. Nathan Duke replaced Wall as a courtesy runner. Ross Minick then drew a walk, and he was replaced on the base paths by courtesy runner James Griffin. Luke Law then drew a walk, and the Raiders had a golden opportunity with the bases loaded. However, once again, they could not cash in. Will Hubbard popped out to end the inning.

Deerfield-Windsor added to their lead with two runs in the top of the fourth. Moore reached on an error, followed by a sacrifice bunt by Davis Lawson. Cole Mitchell then drew a walk, then Grayson Darby hit a pop fly and reached on an error by Tyler Kennedy. Drew Reich, who had been brought in as a courtesy runner, advanced to third on the play and Mitchell advanced to second.

Reich scored the Knights’ third run when Bush grounded into a fielder’s choice. Bueschen then hit a ground ball to Minick, who couldn’t handle it. That would prove to be costly. Minick was able to strike out Dixon for the second out, but Mitchell stole home to give the Knights a 4-0 lead.

The Raiders went in order in their half of the fourth, as did the Knights in the top of the fifth. With one out in the bottom of the fifth, the Raiders once again had runners in scoring position. With runners at second and third, Ross Minick had an opportunity to drive the runs in. However, he grounded out, then Luke Law struck out to end the inning. The Knights went in order in their half of the sixth, as did the Raiders in their half. Will Hubbard came on in relief of Minick in the top of the seventh. Trent Bush reached on an error to lead off the top of the seventh for the Knights. After Bo Bueschen struck out, Bush advanced to second on an error by third baseman Freddie Updike. Drew Dixon was then hit by a pitch. Then Kimbrel belted an RBI double to increase the Knights’ lead to 5-0. After Clarke Sullivan was intentionally walked, Joe Morgan flew out for the second out. The bases are still loaded with two outs. Davis Lawson is then hit by a pitch, scoring Dixon to make it 6-0 Knights.

The Raiders had one last chance to mount a comeback. It started off well when Kennedy led off with a single. After Harrison Bell struck out, Hunter McCain reached on an error. Alex Bell was brought in as a courtesy runner. George Wall came up to bat with one out, and was hit by a pitch. It was the fourth time in three days that Wall had been hit by Deerfield-Windsor pitching.

Ross Minick struck out, but Luke Law singled in an RBI to get the Raiders on the board.

However, there would be no come-from-behind win as Will Hubbard grounded out to end the game.

The Knights scored six runs on five hits, while Southland could muster only one run on five hits. Hunter McCain was the most productive Raider offensively. He went 3-for-4 against the Knights.

Jack Kimbrel went 2-for-4 with an RBI for Deerfield-Windsor. Baylin Moore was difficult on Raider batters. In three innings of work, he gave up no runs on one hit. He walked six but struck out six. Joe Morgan came on in relief of Moore. Morgan worked four innings, giving up one run on four hits. He walked one and struck out six.