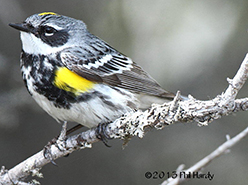 A friend asked me, “What are those sparrow-sized birds I’ve been seeing that have a yellow butt?” I immediately knew what species he was describing — the Yellow-Rumped Warbler.
Yellow-Rumped Warblers are plentiful in South Georgia during winter months. This long-distance migrant prefers to nest in the very northern U.S., the boreal forests of Canada and even into Alaska. Migration occurs during hours of darkness for this species.
Yellow-Rumped Warblers come in two subspecies: Audubon’s and Myrtle. For the purposes of this column we will focus on the Myrtle subspecies as the Audubon’s subspecies has a more western range and is unlikely to be found east of Texas.
While most wood warblers enjoy spending our winter months in Central and South America, the Myrtle Warbler migrates to the southern US, Cuba, Bahamas and Mexico.
When we think about warblers and their diet, our thoughts generally go to insects and tiny caterpillars. But the Yellow-Rumped Warbler has a unique adaptation; in the winter they can consume the berries of wax myrtle bushes and junipers. Their unique gastrointestinal system is able to digest the waxy berries with no problems. Because of this adaptation, Yellow-Rumped Warblers are capable of wintering further north than any other wood warbler. In addition to numerous berries, they readily eat suet, sunflower seeds, mealworms and will fly-catch for insects by sallying out from a perch.
As is the nature of all wood warblers, they are highly active and almost constantly moving in search of food. The Yellow-Rumped Warbler is certainly no exception. I have noticed them even “guarding” the feeders in my backyard as they give chase to subservient birds. Their highly active lifestyle absolutely requires them to feed often in order to survive.
Yellow-Rumped Warblers are one of the most prevalent species of wood warblers in North America with vagrant populations found in Greenland, Iceland, Portugal, Spain, Netherlands and the U.K. Globally, population estimates are around 90 million individuals making this species currently of least concern of going extinct.
When I first began watching and observing birds I had heard of the Yellow-Rumped Warbler but had yet to see one. One morning I was walking in my neighborhood with Clive Rainey and Dr. Bob Norris when I heard them mention the bird’s name. Eagerly I asked them to show me this bird. Feeding in some wax myrtle bushes were a few birds. I’ll always remember that location and moment.
Yellow-Rumped Warblers get their name because of a yellow patch of feathers on their back. When not in flight, their wings are folded in such a way that exposes a small golden patch at the base of their backs and the beginning of the tail. Because of this yellow patch they are affectionately referred to as “butter butts” by some birders. Yellow-Rumped Warblers are adorned with patches of yellow on the crown of their heads and on both flanks. Otherwise the rest of their body is decorated with black and white. The female of this species appears more drab than the male.
In mid-March I ambled into my sunroom early one morning still clad in PJs and robe, steaming coffee in hand. I noticed a warbler sitting perfectly still on one of my feeders. Upon seeing no other birds stirring I thought there must be a hawk in the area. Even when I walked over to the window only three feet from the bird, he didn’t flush or move in the least. I mean this bird acted like he had just been removed from the freezer. He didn’t even move his head left or right. My ID skills told me the bird was a Yellow-Rumped Warbler although I saw no yellow patch on the rump because his wings were folded so tight.
I became fixated on this tiny bundle of statue-like feathers sitting motionless as I got comfortable in my recliner. Finally, while on my second cup of coffee, I observed a hawk fly from my backyard out across Lake Jennifer. The object of my attention only now turned his head to watch the accipiter leave. The warbler now began to turn his head left, right, up and down. With his anxiety level lessened the bird stretched his wings showing the yellow patch confirming my early morning sighting.
Around my yard I host several Yellow-Rumped Warblers during the winter months. Chances are good that you do too as they are so very abundant. Their familiar short chip call is audible evidence of their presence whether I see them or not. But as winter gives way to spring and the daylight hours and testosterone levels increase, their melodious song bursts forth as part of nature’s concert. By the middle of April our winter visitors have departed Southwest Georgia to return to their northern homes to procreate yet another generation of one of our most abundant wood warblers.
Remember to take the time to enjoy our wild birds and keep your cats indoors.

Phil Hardy is a bird watcher and bird photographer, and lives in Americus.