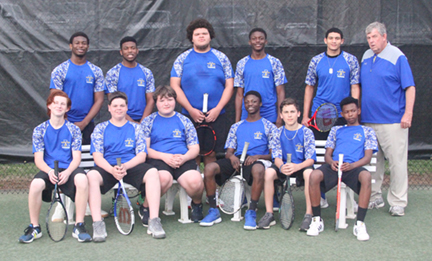 AMERICUS – The Americus-Sumter boys’ and girls’ tennis teams gained a split with Peach County on Tuesday, April 3, at the ASH Tennis Complex.

The boys team defeated Peach County 5-0, partly due to three forfeits by the Trojans. Aaron John-Ndaazywe, Braxton Cross and Xavier White all won their matches due to forfeits. In doubles action, Keldrick Flemming/Chris Wooden won their match over the doubles team of Reggie Gray/Verner Harris 6-0, 6-2. In the other doubles match, the ASH team of Zach Johnson/Aaron Lewis defeated Patrick Lavalt/Malik Wright in straight sets 6-2, 6-1.

For the ASH girls, it was more of a battle. The ASH number one player, Hannah Martinez lost in straight sets to Alex Estrada 1-6, 1-6. Jovan Sykes of ASH lost to Emma Robinson 1-6, 1-6. However, the Lady Panthers number three player, Kimberly Worthy, defeated Peach County’s Paola Diaz in straight sets 6-0, 6-1. This made the team score 2-1 in favor of Peach County, but a chance for the Lady Panthers to make headway in the doubles matches.

Things started out well for ASH in the girls doubles competition when Kirby Perry/Taylor Garcia defeated Josie Spradley/Lindsey Arrington in straight sets 6-1, 6-0. This result tied the overall match at 2-2. The next doubles match would decide the outcome. It was a hard-fought battle between the ASH team of Elena Pagan/Trenidee Sanford and the Peach County team of Gabby Martinez/Kailah Ugarte. In the first set, the team of Martinez and Ugarte won a tie-breaker 7-5. They won the second set in a tie-breaker as well, winning 7-1 and clinching the match for Peach County.

Both teams return to action Wednesday, April 4, when they take on Westover at the Albany State West Campus, formerly known as Darton College. The matches begin at 4 p.m.