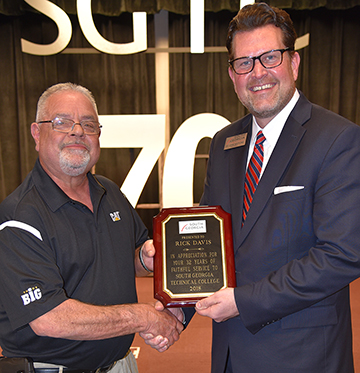 John Watford, at right, is shown presenting Rick Davis with a plaque in honor of his more than 30 years of service with South Georgia Technical

AMERICUS — South Georgia Technical College (SGTC) is celebrating its 70th anniversary this year and the history and legacy of the college were especially evident at the retirement reception for heavy equipment dealer service technology instructor, Rick Davis, when three generations of diesel instructors covering nearly that entire 70-year span reunited.
Rick Davis, who has been an instructor at SGTC for 33 years, was honored by the current administrators, faculty, and staff as well as former employees and students with a retirement reception in the John M. Pope Industrial Technology Center recently. Many of Davis’ family members were present at the event.
“I would like to thank my family, Dr. Watford and everyone here at South Georgia Technical College for your support and friendship,” said Davis. “This is a special place and I have certainly enjoyed working with each of you. I am going to miss you but hopefully you will still see me around from time to time.”
Jack Busby, who was the diesel technology instructor at SGTC from the early 1950s until the 1980s taught Rick Davis in 1978.  Davis taught SGTC’s newly hired heavy equipment dealers’ service technology instructor, Donald Rountree in the mid 1980s. Rountree will now continue the legacy started under Busby and impart the knowledge of Busby and Davis to the next generation of SGTC diesel equipment technology students and possibly instructors.
“Rick Davis is a very special individual,” said SGTC President John Watford, Ed.D. “He is an integral part of a tremendous legacy of outstanding diesel equipment students and instructors here at South Georgia Tech. We are here today to recognize him for his 33 years of teaching and service to the diesel and Caterpillar students who have attended South Georgia Technical College. But we are also here to honor him for his work ethics, knowledge, integrity, and wisdom that he has so freely shared with almost everyone here today. He has been a mentor to many people at South Georgia Tech and he will be missed.” 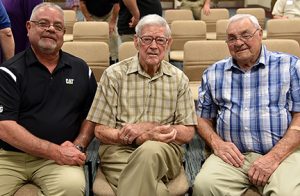 Watford also asked former diesel equipment technology instructor Busby to stand. Watford talked about the tremendous legacy of Busby who had impacted hundreds of students as a diesel instructor at SGTC, including Davis. Then Watford extolled how Davis had continued Busby’s legacy by continuing to teach the next generation of young men and women who desired to enter the diesel technology career field. And now, Davis was handing that torch to one of his former students, Rountree.
“This is an amazing example of why South Georgia Technical College is so special,” said Watford. “The legacy and wisdom that has been handed down from instructor to student for nearly 70 years is very evident right here with all three of these individuals. We are hoping that our new instructor, Donald Rountree, will continue this legacy to the next generation of Diesel Equipment Technology students.”
Davis is married to Donna Davis and the couple lives in Buena Vista. He received his diploma in diesel mechanics in 1978, from South Georgia Tech. He worked briefly as a diesel substitute instructor at SGTC after graduation. He worked for Cargill Inc. as a diesel mechanic after that and then returned to South Georgia Tech as a full-time diesel instructor from 1981 until 1991. He left South Georgia Tech as part of a reduction in force in 1991. During that time, he worked for B.V.I. out of Buena Vista and Snap-On Tools.
Davis returned to South Georgia Tech in 1995, as the technical instructor for heavy equipment mechanics. He returned to diesel technology as an instructor in 2002, and then transferred back to the Caterpillar heavy equipment dealer’s service technology program in 2006. He remained in that capacity for the remaining 12 years until his retirement in 2018. 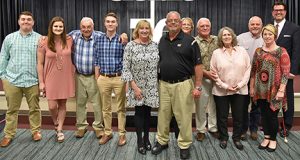 South Georgia Technical College President John Watford, Ed.D. (back row – far right) is shown with Rick and Donna Davis (center) and their family and close friends who came to wish him well during his retirement reception with over 33 years of service to SGTC.

In addition to his wife Donna, his father Jerry Davis, and his mother and father-in-law, Hugh and Janet Spinney, all from Buena Vista, attended the reception. His nephew, Trenton Davis, and niece, Christina Davis and Luke Moore as well as sister-in-law, Dianne Russell, and close friends, Mikel and Amanda Mailhot were also at the event.
Watford opened the floor for comments and many of the faculty and staff at SGTC as well as Davis’ family took the opportunity to thank Davis and wish him well during his retirement.