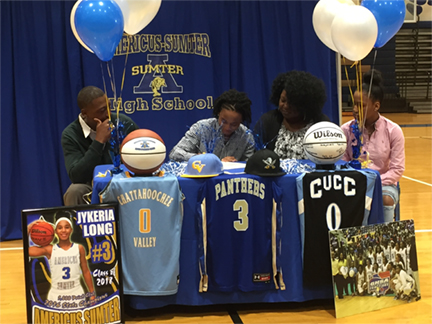 ASH head coach Sherri Harris addressed the crowd of senior students assembled at the ASH gymnasium on Long’s behalf. “She (Long) has won 100-plus games in four years. Equal it out, that’s about 25 plus wins. Not very many people have done that in the state of Georgia”, Harris told the crowd assembled. “She has a state championship ring, she’s accumulated over 1,300 points, 500-plus rebounds, 450-plus steals. She doesn’t pass the ball that much, you know. She’s a shooter. For the last two years, Jy has done a tremendous job of transitioning to just being a shooter on that state championship team to a complete ball player. That’s why she’s getting an opportunity to go on to the next level,” Harris continued. Harris went on to say that Long is going to her former junior college. Long will be joining two of her former teammates on that 2016 state championship team: Zari Mays and Timi’a Swanson.

Then, it was Long’s turn to address the crowd. “First, I want to start off by thanking God, my family, my friends and those who supported me,” Long said. “The main people I want to thank who got me this far are Coach Harris and Coach Brown.” Long was referring to Assistant Coach Eric Brown. At that point, it became a very emotional time for Long as she struggled to hold the tears back. Once she regained her composure, she thanked Coach Harris and Coach Brown for pushing her very hard throughout her high school career. “I’m going to miss playing for Coach Harris,” Long said.

After that, she went on to say that she will be playing for the Chattahoochee Valley Lady Pirates. 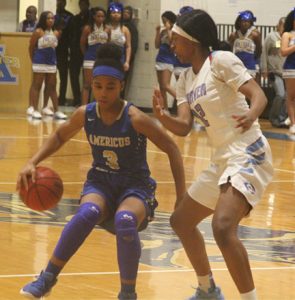 Jykiera Long with the ball against a Carver defender. Long scored over 1,300 points in her four-year career at Americus-Sumter.
Photo by Ken Gustafson

Years ago, when Harris was an assistant coach at ASH, she went to watch Jykiera Long, her twin sister Tykiera and Shadajah Johnson play in Middle School. All three have played for the Lady Panthers in the past four years. “I got a chance to see them play, and in four years, and like I said, they won 100-plus games and not one time have I had any discipline problems out of that entire class,” Harris said. “We haven’t had any issues as far as academics. They’re always doing the right thing, and I think she (Jykiera Long) and her sister (Tykiera) and those other young ladies in that class are going to go out and do great things. They are going to represent Americus-Sumter High School really well.”

As far as what Long will be studying at Chattahoochee Valley, she is undecided as of yet. After her time at CVCC, Long plans to transfer to an NCAA Division I school.

CVCC Assistant Coach Michael Woods was on hand for Long’s signing. He says they have plans for her to play right away. “We recruited her as a combo guard,” Woods said. “She’s going to play a lot of point this year for us. She’s going to come in right away and play. We didn’t recruit another point guard this year. She is going to playing the point guard spot. We look forward to her playing a lot of minutes this year.”

Like all kids, Jykiera Long had some funny experiences growing up, but according to Regina Nash, Long’s mother, one moment sticks out. “When she was about five years old, her and her twin sister (Tykiera), they use to try and fool people,” Nash said. “I remember one time when my mom had them and she would try to put them in the car, and by the time she put Jy in the car, Ty would get out of the car. Then by the time she would put Ty in the car, Jy would get out of the car.”

There is no doubt that the work ethic that Long showed during her high school career will continue on at the college level. Americus-Sumter has launched yet another champion.