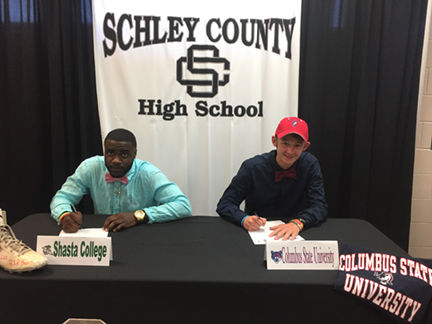 ELLAVILLE – It was a great day for Schley County High School as two of its student-athletes, James Baker and Austin Anthony, signed athletic scholarships. Baker signed a football scholarship, while Anthony signed a scholarship to run Cross Country.

Baker is a running back on the Schley County football team. He signed a letter of intent to continue his education and play football at Shasta Community College, a junior college in Redding, CA. Baker had offers from the University of the Cumberlands in Kentucky, Warner University in Florida, and a school in New Mexico, but chose to go to Shasta. “I felt like it was home,” Baker said. “The coach made me feel like it was a great place.” Baker said that at Shasta, they will use him at running back or free safety. He will add depth at either position for the Knights. In the 2017 season, Shasta finished with an overall record of 7-3 and 4-1 in their conference. They reached the post season and lost to Monterey Peninsula Junior College 45-38 in overtime. Baker plans to major in Business Administration. After his time at Shasta, he plans to continue his education and football career at a four-year school.  According to Baker’s teammate, Offensive Lineman Christian Arnett, Baker had the ability to make a lot of plays to impact a game. “He was a playmaker…an extreme playmaker. I enjoyed blocking for him,” Arnett said. “Whenever I blocked, he made the right move and make the necessary move. He made plays happen. His nick name was Playmaker Baker.”

Austin Anthony runs Cross Country at Schley County. He signed a letter of intent to compete at Columbus State. Anthony will be majoring in Computer Science and would like to go into Cyber Security. He would possibly like to work at TSYS after graduation. “My Dad works with TSYS and they have job openings over there,” Anthony said. “Maybe that will work out.”  TSYS is a tech support company specializing in credit card payment solutions and has a branch in Columbus.  As far as his best race was concerned, Anthony said that it was last Fall’s Area Meet. “The whole team just laid down a good amount of times,” Anthony said.

Head Cross Country Coach and Athletic Director Gabe Theiss had tremendous praise for Anthony. “As his cross country coach, I can say this about Austin: He’s the hardest-working kid I’ve ever coached,” Theiss told the crowd assembled. “I haven’t coached cross country long, but I seriously doubt I’m going to have many that will out work him in the future. He was a great leader for us, not vocally, but through his actions.

Schley County Head Football Coach Darren Alford didn’t coach Anthony on the football field, but he did coach him in the weight room. “He’s a hard-working young man,” Alford said. “He has come so far. He has worked tremendously hard in the weight room the whole time. I’ve been honored for Austin’s parents here and his family members. It’s been an honor for me to be a part of that too.”

Alford went on to praise the efforts of his college-bound football player, James Baker. “I

‘ve had the luxury, the opportunity and the fortune to meet James Baker last year,” Alford said. “It’s been a little over a year and a half ago, I think now, that me and James got to know each other. James started playing basketball for us, I believe, his junior season.”  Alford went on to say that Baker worked hard in the weight room and did everything that was asked of him. “When James came out on to the football field last Spring. I knew we had something,” Alford said. “He brought a new energy to our football program.” Alford went on to say that Baker had an opportunity to go to another college on National Signing Day, but that it didn’t work out. “He didn’t quit,” Alford said. One other thing that Coach Alford said about both student athletes is that they are coachable.