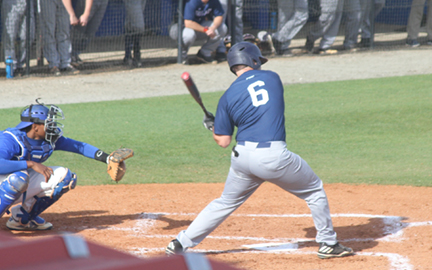 GSW's Dakota Long went 3-for-4, scored a run and drove in two RBIs in the Hurricanes' 7-6 win over Lander on Friday, April 13. photo by Ken Gustafson

In Game 1 on Friday, April 13, The Hurricanes scored one run in the second, two in the fifth, one in the sixth, two in the seventh and one in the ninth to edge out Lander 7-6.

Zack Moore led Lander’s offense by going 3-for-4, scoring a run and driving in three RBIs.

GSW starter Kyle Britt (3-3) got the win. He pitched the whole game. He gave up six runs on 11 hits. He walked two, struck out five and gave up one home run. J.D. Cook (3-5) took the loss. He pitched 1.2 innings, giving up one run on one hit. He walked one and struck out one.

In the first game on Saturday, April 14, the Hurricanes got the bats going, scoring 12 runs on 14 hits and committing three errors. Lander scored seven runs on 11 hits and committed one error.

GSW had two big innings. They scored five runs in the second and five in the eighth on their way to the 12-7 victory. Danny Molinari had a tremendous day at the plate. He went 4-for-6 and scored two runs. Jared Jones went 2-for-3 and drove in two RBIs. Nathan Schreckengost led the offensive attack for Lander. He went 3-for-4, scored two runs and drove in four RBIs.

Mitch Holloway (2-6) got the win for the Hurricanes. He pitched seven innings. He gave up seven runs on 11 hits, walked three, but struck out 11 batters. He gave up one home run. That came in the bottom of the sixth inning when Schreckengost hit a solo home run.

Unfortunately for the Hurricanes, they were unable to get the sweep as Lander was able to salvage Game 3 of the series 6-2. The Bearcats scored three runs in the fifth and two in the seventh on their way to the win. For GSW, Jonathan Martin went 2-for-4 at the plate and scored a run. Tyler Skelton also went 2-for-4 for the Hurricanes.

Kyle Spinks (1-6) took the loss. He pitched six innings, giving up five runs on five hits. Four of those runs were earned. He walked five, struck out seven and gave up one home run. That came in the fifth off the bat of Nathan Schreckengost. Jared Jones homered to left field in the third for the Hurricanes. Chris Sheehan (3-5) got the win for the Bearcats. He pitched six innings. He gave up one run on six hits. He walked one batter, but struck out seven.

The Hurricanes are now 8-30 on the season overall and 4-20 in PBC play. They travel to Florence, SC to take on Francis Marion University for a three-game series beginning Saturday, April 21. First pitch for Game 1 is scheduled for 1 p.m. They are still mathematically in the race to qualify for the eighth and final spot in the Peach Belt Conference Tournament. They have three games left against Francis Marion and three games against UNC Pembroke. They would have to win the majority of those games and hope the teams in front of them: Augusta, Francis Marion and Lander, struggle down the stretch. All three of those teams have at least seven conference wins.