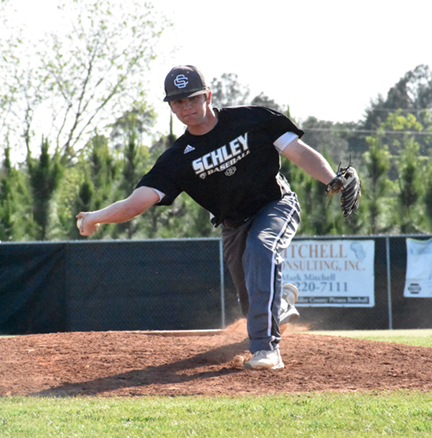 Schley County pitcher Lorne Barineau got the win in the Wildcats’ 11-0 shutout of Miller County. He gave up two hits, walked one and struck out two. Photo by Cricket Barineau

Three Wildcat pitchers combined for the two-hit shutout: Trent Bivins, Lorne Barineau and Dylan Windham. Bivins began the game on the mound for the Wildcats. He worked 1.2 innings, giving up no hits, walking two and striking out three. Barineau worked 2.1 innings and ended up getting the win. He gave up only two hits, walked one and struck out two batters. Dylan Windham finished off the game. He worked one inning, giving up no hits, no walks and striking out two Pirate batters.

The Wildcats jumped on the Pirates early, scoring four runs in the first inning. Jordan Hall led off with a walk against Miller County starting pitcher Kohler Tabb. Hall advanced to second on a passed ball. Then Dylan Taylor singled, advancing Hall to third base. Camron Vanlerberghe followed with a single, scoring Hall for the first run of the game.

The Wildcats scored three more runs in the first inning to take a 4-0 lead.

Schley County scored five more runs in the second inning. Much of this was due to singles by Dylan Taylor and Ashton Goodin, as well as a sacrifice fly by Wade Law.

The only hits from Miller County came off the bats of Dylan Johnson and Will Cook.

Having defeated Crawford County 16-1 on Tuesday, April 17 and Manchester 10-1 on Monday, April 16, the Wildcats have outscored their opponents 37-2 in their last three games.

The Wildcats will now get ready to host the Region 4-1A Championship against Brookstone (23-4, 12-1) on Friday, April 19. First pitch is scheduled for 5:30 p.m. The last time the Wildcats faced Brookstone was in Columbus on Thursday, March 15. The Cougars dominated the Wildcats 12-2.