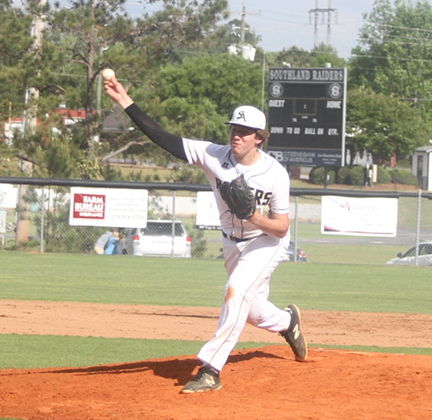 Southland starting pitcher Harrison Bell struck out 10 Westwood batters to lead the Raiders to a 10-0 victory over the Wildcats. Photo by Ken Gustafson

AMERICUS – The Southland Academy Raider Baseball Team got off to a slow start hitting-wise. However, they took advantage of some miscues from Westwood and scored six runs in the bottom of the fifth inning to run-rule the winless Wildcats 10-0 Monday, April 23, at Southland Academy.

Southland starting pitcher Harrison Bell went the entire way for the Raiders. Bell pitched six innings, giving up no runs on five hits. He walked two and struck out 10 batters.

“It was a game that I feel we probably should have won, and we did,” Southland head coach John Brady said. “We played well. Harrison pitched the ball really well. They (Westwood) were a little short on pitching. They have a region game tomorrow. We did a good job scoring the runs that we did. I was pleased with the game. The first guy (Gage Mock) gave us a little trouble, but after that, we kind of settled in and did some good things.”

The Wildcats (0-10) had the bases loaded with one out in the top of the third, but Bell struck out both Johnson Gainous and Kade Godwin to end the threat.

Southland’s Clay Owens went 2-for-4 at the plate and drove in two RBIs.
Photo by Ken Gustafson

The Raiders scored their first run of the game in the bottom of the second inning. Clay Owens reached on an error, stole second base, advanced to third on a wild pitch, then scored on a passed ball. The Raiders got their second run in the bottom of the third. With one out, Harrison Bell was hit by a pitch. Then George Wall was hit by a pitch, putting runners at first and second with one out. James Griffin was called upon to be a courtesy runner for Bell, and Nathan Duke came in to run for Wall. Clay Owens singled home Griffin, but Duke was thrown out at the plate to end the inning. 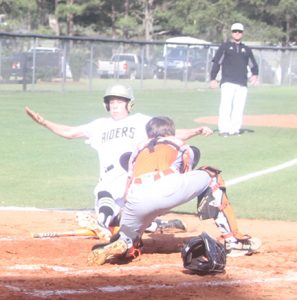 Southland runner Nathan Duke is tagged out at the plate.

In the bottom of the fourth, Will Hubbard reached first by being hit by a pitch, then stole second. After Landon Law struck out, Tyler Kennedy reached on an error. Hunter McCain would then reach on an error. After Harrison Bell popped out for the second out of the inning, the bases were loaded for George Wall. Wall drew a walk, scoring Hubbard. Owens popped up to end the inning, but the Raiders took a 3-0 lead.

In the bottom of the fifth, Southland broke the game open. Luke Law led off with a single. After Freddie Updike popped out for the first out, Will Hubbard drew a walk. Landon Law singled and advanced to second on an error. Two runs scored on that play, and the Raiders led 5-0. Southland scored four more runs in the inning to take a 9-0 lead.

Southland’s Hunter McCain at the plate against Westwood.
Photo by Ken Gustafson

In the bottom of the sixth, they added the last run of the game when Adam Smith singled home James Griffin to end the game.

Westwood starting pitcher Gage Mock pitched well during the first three innings, giving up only two runs. However, the Raiders were able to take advantage of walks, errors, wild pitches and multiple hit batsmen to win the game.

The Raiders improve to 7-8-1. They finish the regular season Tuesday, April 24, when they travel to Damascus, GA to take on Southwest Georgia Academy. First pitch is scheduled for 4:30 p.m.