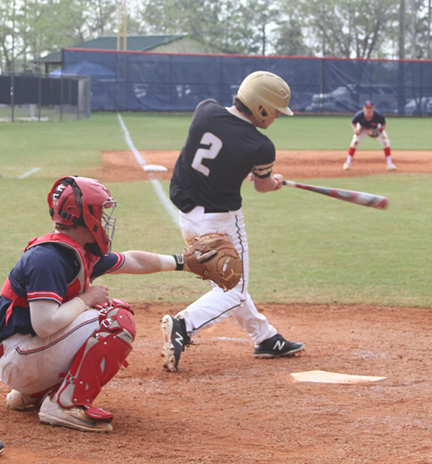 THOMASVILLE – The Brookwood Warriors grabbed an early lead against Southland and never looked back on their way to a 9-4 victory over the Raiders on Friday, April 20, at the Brookwood School.

The Warriors exacted revenge after getting pounded 17-2 by the Raiders in Americus on Tuesday, April 17. With the loss, Southland drops to 6-8-1 overall and 4-4 in GISA Region 3 AAA. They are tied with Valwood for second place at 4-4. Both Tfitarea Academy and Deerfield Windsor are tied at 5-3 atop the standings. The top four teams in the region go to the GISA Class AAA State Playoffs.

Both teams scored three runs in the first inning. With two outs in the top of the first. Harrison Bell drew a walk against Brookwood starting pitcher Tyler Mirick. Mirick then walked George Wall, putting Raiders at first and second with two outs. Then Clay Owens singled, loading the bases for Luke Law. Law singled to center field, driving in Owens for the first run of the game. Two more runs score on an error by left fielder Nicholas Lauderdale, giving the Raiders a 3-0 lead.

The Warriors responded in their half of the first with three runs of their won. Joe Parker led off the bottom of the first with a single, followed by a single by Lauderdale. Both singles came against Southland starting pitcher Ross Minick. William Lee executed a bunt single to load the bases for Mirick. Mirick then drew a walk, scoring Parker to put Brookwood on the board.

With the bases still loaded and nobody out, John McCaskill grounded into a fielder’s choice, scoring Lauderdale. Will Saunders then grounded into a double play. But not before Lee scored to tie the game at 3-3.

In the bottom of the second with two outs, Parker reached on an error. Then Lauderdale doubled home Parker to give Brookwood a 4-3 lead. In the bottom of the third, Tyler Mirick led off the inning with a walk. Eventually, however, the Warriors loaded the bases with one out. Daniel Atkinson then reached on an error, allowing a run to score and allowing the Warriors to increase their lead to 5-3.

With the bases still loaded and only one out, Nicholas Lauderdale drew a walk off of Ross Minick, scoring Will Saunders to give the Warriors a 6-3 lead. Joe Parker then singled to center field, driving in two more runs. The Raiders found themselves in a hole, down 8-3 in the bottom of the third. The Warriors added one more run in the bottom of the third to take a 9-3 lead. That would be all the runs Brookwood would need for the win.

The Raiders tried to climb back in it in the top of the fifth, and were able to score a run. However, that would be as close as they would get as the Warriors won the game 9-4.

Southland starter Ross Minick struggled in this game and took the loss. He pitched 2.1 innings, giving up nine runs on six hits. Seven of those runs were earned. He walked four and didn’t strike out any Brookwood hitters.

Tyler Mirick got the win for the Warriors. Mirick went five innings, giving up four runs on seven hits. Three of those runs were earned. He walked five and struck out two.

The Raiders step out of conference when they host Westwood on Monday, April 23. First pitch is scheduled for 4:30 p.m.