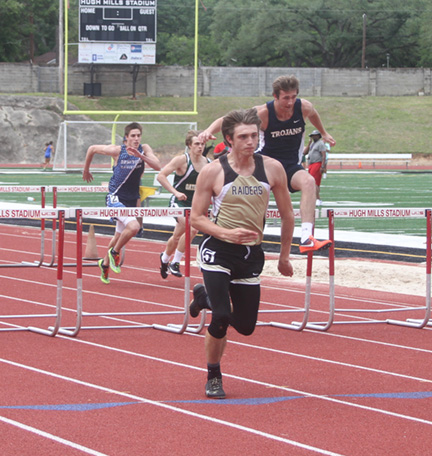 : Southland’s Bennett Carey finished in six place overall in the preliminary round of the AAA Boys 110 Meter Hurdles. It was good enough to qualify for the finals. Photo by Ken Gustafson

ALBANY – It was a good start for the Southland Raider and Lady Raider track and field teams on Day 1 of the Georgia Independent School Association (GISA) State Track and Field Meet on Thursday, April 26th, at Hugh Mills Stadium in Albany.

“I was pleased with the effort. The 4×100 Meter Relay Team gets to come back Saturday for the State Championship. Several of the kids ran PRs (personal records),” Southland head coach Nathan Hammack said.

Thursday’s events were mostly preliminary rounds, with the exception of the girls and boys 1600 meter races. In the preliminaries of the Boys 4×100 Meters, the Southland team consisting of Clay Owens, Morgan Youngdale, Alex Roach, Landon Law, Caleb Law and Nathan Duke finished in seventh place, good enough to qualify them for the finals on Saturday, April 28th. They finished in a time of 45.51. The top eight athletes from the preliminary rounds of each event advance to the finals. “It was good. We ended up getting third in our heat, so that’s all right,” Landon Law said. Law went on to say that the passing of the baton could be a little cleaner.

The GISA State Meet consists of AA and AAA schools. Southland is in Class AAA.

In the finals of the AAA Girls 1600 Meter Run, Ryleigh Bell of Southland finished in seventh place with a time of 5:46.02. Her teammate, Jadie Burrell, finished in 10th place with a time of 5:52.90. Burrell believes that getting out of the blocks too slowly hurt her in this race. “I feel like I did good, but I need to improve the start,” Burrell said. Both Bell and Burrell will be a part of the AAA Girls 4×400 Meter relay team that will compete in the qualifying round on Friday, April 27, at 4 p.m. 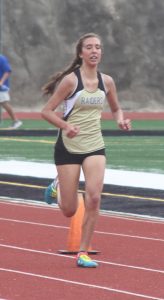 Southland’s Ryleigh Bell finished in seventh place in the finals of the AAA Girls 1600 Meter Run. Bell will participate in the Girls 4×400 Meter Relays on Friday, April 27.
Photo By Ken Gustafson

In the preliminaries of the AAA Boys 110 Meter Hurdles, Bennett Carey of Southland finished in sixth place with a time of 17.76, good enough to qualify for the finals to be held on Saturday, April 28, at 11:45 a.m. In the finals of the AAA Boys 1600 Meter Run, Southland’s Max Foster, son of boys’ basketball and girls’ soccer coach Rundy Foster, finished the race with a solid time of 5:24.44.

State meet records were broken on Day 1. Jacob McLeod of Trinity Christian-Dublin won the Boys 1600 Meter Run, finishing in a time of 4:19.39. This was a new GISA State Meet record. McLeod broke his own record of 4:24.82, which he set at the 2016 GISA State Meet. 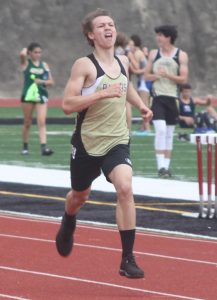 Another state meet record broken was in the AAA Girls 1600 Meter Run. Camryn Bridges of Deerfield-Windsor set a new state meet record in the event. Bridges won the race in a time of 5:09.05, eclipsing the old record of 5:09.74 set by Ruthie Powell of Heritage-Newnan back in 2015.

More Southland athletes will be in action on Friday, April 27. Friday’s action will be mostly field events, such as the Shot Put, Long Jump, Triple Jump, High Jump, Discus and Pole Vault. Southland’s Brody Shattles has a chance to win state in the AAA Boys Pole Vault event. Shattles won the Pole Vault competition at the Region 3-AAA Meet, vaulting a height of 11-06.00. Sydney Payne, who finished third in the Girls High Jump competition at the Region 3-AAA Meet, will try to not only win state in the event, but will try to break the State Meet record of 5-06 set by a Southland alum, Denise Holloway, back in 1980. Payne will also compete in the long jump and triple jump competition as well for the Lady Raiders. 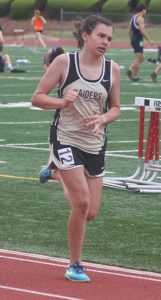 Southland’s Jadie Burrell finished in 10th place in the state finals of the AAA Girls 1600 Meter Run. Burrell will be on the Lady Raiders’ 4X400Meter Relay Team which will compete Friday, April 27.
Photo by Ken Gustafson