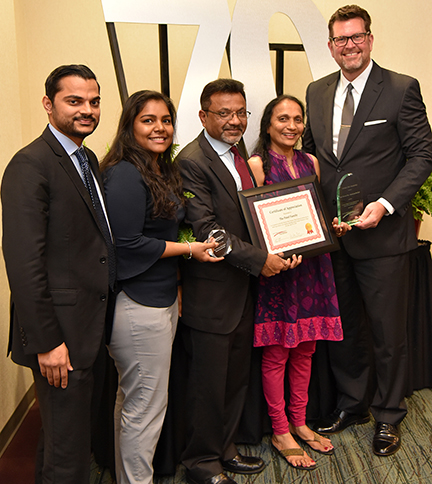 SGTC President John Watford, Ed.D., is shown at right with Mr. and Mrs. Rushabh Patel and Mr. and Mrs. Sharad Patel who were recognized at the SGTC Foundation Donor Dinner for being members of their life time giving. The Patels endowed the Best Western Plus Windsor Hotel scholarship for culinary arts students at South Georgia Tech. They were also recognized as members of the 2017 President’s Club.

AMERICUS — The South Georgia Technical College (SGTC) Foundation paid tribute to over 200 of its foundation supporters at its annual Donor Appreciation Dinner in the John M. Pope Industrial Technology Center on the SGTC campus recently.
SGTC is celebrating its 70th anniversary this year and the SGTC Foundation Donor Appreciation Dinner utilized the theme of “Proud Past – Promising Future” to pay tribute to the college’s 70 years of success and also thank the donors who have helped provide key support to the foundation, the college, and its students.
“Thank you for being here tonight,” said SGTC President John Watford, Ed.D. “And thank you for supporting our students. Your support is a tremendous asset. We have been told many times, that we have the best community support of any technical college in Georgia. Your involvement makes a huge different in the lives of our students and this community.”
South Georgia Tech supporters were treated to an excellent dinner planned and prepared by the culinary arts students under the direction of Americus culinary arts instructor, Ricky Watzlowick and Dean of Academic Affairs over culinary arts, David Finley, Ed.D., who is also working with the Crisp County Center program while the school searches for another full-time culinary arts instructor.
After the students served the dinner, Watford revealed that the SGTC culinary arts degree program had been singled out by Schools.com as the top ranked culinary arts program for two- and four-year colleges in the United States for 2017-2018. This was based on graduation rates, student-to-faculty ratio, flexibility, cost of tuition and fees, institutional spending and the size of the program. He then asked the culinary arts instructors and students to come out and be recognized for this accomplishment.
Ben Dupree, chairman of the SGTC Foundation, highlighted the 2017 accomplishments and financial impact the Foundation provided the college.
“During this past year, the Foundation provided South Georgia Tech with services valued at approximately $1.1 million and provided 566 foundation scholarships to students,” said Dupree. A special video highlighting those accomplishments and student scholarship recipients was shown during the meal to allow donors to see their support in action.
Watford and Su Ann Bird, executive director of the SGTC Foundation, presided over the awards ceremony in presenting several awards to those individuals and companies who made substantial contributions to the Foundation during 2017.
The Foundation acknowledged Ring Power Corporation, a Caterpillar partner, for contributions of over $50,000 to the SGTC Foundation in life-time giving. Chip Handley and Abel Posada accepted the award on behalf of the Ring Power Corporation.
Sharad and Ila Patel and the Best Western Plus Windsor Hotel, Bill and Sue Dupree, the Fisher Crum Foundation, John and Barbara Watford, and Treadmaxx Wholesale Tires Inc. were recognized for joining the Scholar’s Club which signifies over $10,000 in life time giving. The Patel family and Best Western Plus Windsor Hotel, Bill and Sue Dupree, and Treadmaxx Wholesale Tires also were spotlighted for endowing scholarships and for being members of the President’s Club for 2017. 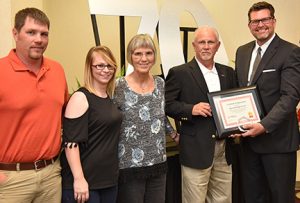 John Watford, Ed.D., president of South Georgia Tech, is shown recognizing the Jake Everett family for their endowment of the Rose Ann Everett scholarship for John Deere tech and welding students in memory of their daughter Rose Ann Everett. Shown from left are Jayson and Linda Everett and Margie and Jake Everett.

In addition to the life time giving awards, Watford also identified seven other groups for endowing scholarships to the foundation in 2017. A total of 11 endowed scholarships were recorded in 2017.
Agrium Inc. was highlighted for endowing their sixth academic scholarship at SGTC. Betty Lee Scott accepted the award on behalf of Agrium. Lou Crouch could not be at the event but he was singled out for his sixth scholarship to the Law Enforcement Academy in 2017.
Citizens Bank and its board of directors were thanked for their sixth endowed scholarship. Laurie Jessop and “Kitty” LaDaisy Battle were asked to come forward and accept endowed scholarship certificates for the new Waitsman Health Care endowed scholarship created by Marie Waitsman and her family in their honor. Jake and Margie Everett endowed a scholarship in memory of their daughter, Rose Ann Everett for John Deere tech and welding students, and Hank and Sandy Linginfelter were recognized for endowing the Dan Linginfelter aviation maintenance technology scholarship.
Sharron Johnson and Janice Smarr accepted framed scholarship certificates for Law Enforcement Academy and Criminal Justice scholarships endowed in memory of their sons Jody Smith and Nick Smarr, who were killed in the line of duty. The scholarships were endowed by the Smarr-Smith Foundation and an anonymous donor.
Watford also drew attention to the 14 Caterpillar officials who were present at the banquet and thanked them for their support over the past 16 years. They included Chip Handley and Abel Posada of Ring Power in St. Augustine, Fla.; Ashley Self, John Grant, Scott Suttle, Jessica Winters and Bob Bacon of Thompson Tractor in Birmingham, Ala.; Duane Gabehart and Brad Spickard of Stowers in Knoxville, Tenn; Philip Welch and Tony Tice of Thompson Machinery of Laverge, Tenn.; Teresa Odom of Puckett Machinery in Flowood, Miss., and Jim Larson and Jeff Cornwell of Yancey Brothers in Austell.
In addition to the Caterpillar Foundation, Watford congratulated several other groups for being members of the President’s Club, which denotes an annual gift of $5,000 or more to the SGTC Foundation.
Agrium Inc., Aramark Services, AT&T Georgia, Best Western Plus Windsor Hotel, Caterpillar Foundation, Charles L. Mix Memorial Foundation Inc., Citizens Bank of Americus, the Crisp County Power Commission, Lou Crouch, the Rev. and Mrs. Bill Dupree, Jake and Margie Everett, Flint Energies Foundation, Georgia Power, John Deere, Hank and Sandy Linginfelter, Mattie Marshall Foundation Inc., Eliza C. Parker, Judge and Mrs. George Peagler, Smarr & Smith Foundation Inc., The Thompson Foundation, Treadmaxx Tire Distributors Inc., Mrs. Leonard Waitsman, and Yancey Brothers Co. were all members of the President’s Club for 2017.
Following the presentation of the awards, Su Ann Bird expressed her appreciation to each of the donors for helping create such a “Proud Past and Promising Future” at SGTC through their generous giving. She also thanked the board of trustees for volunteering their time to serve as SGTC advocates and for their financial commitment to SGTC. “Every time you give to the Foundation, you are contributing to the success of our students and changing lives,” commented Bird. “I hope you will continue to invest in the future of South Georgia Technical College and the students we serve.”
Current members of the SGTC Foundation board of trustees are: Randy Jones, William B. Dupree, Sharad Patel, John T. Argo, Greg Austin, Michael A. Cheokas, Michael J. Donnelly, Ben Dupree, Jon Coogle, William S. Harris Sr., Joe Hooks, Joy Nelson, Willie J. Patrick, Judge George M. Peagler Jr., Monica Simmons, Andrea Thomas, Daniel L. Torbert and Rick Whaley.
Decorations for the event were provided by Ruth Jones. Raymond Holt, Dean for Academic Affairs at SGTC, provided the invocation for the meal and Elaine Skipper played the piano.