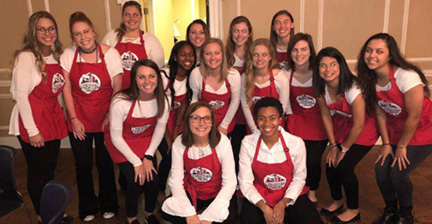 GSW student-athletes volunteered their time to perform acts of service in the community. Photo by GSW

AMERICUS – The GSW Athletic Department finished third nationally among NCAA Division II schools nation-wide for the Team Works/Community Service Competition in the last standings of the 2017-18 academic year released by the NCAA.

The rankings are compiled based upon confirmed volunteer hours served by each team in athletic departments across the nation.

Every GSW team completed more than 100 volunteer hours with a 95 percent participation rate from athletes across the department. In all, more than 3,722 hours were served by Hurricane athletes in 2017-18.

GSW worked weekly with local senior living center Magnolia Manor in helping with their 5K superhero run, game nights, talent shows and visiting with residents. Other volunteer hours included working with Habitat for Humanity to help refurbish the home of a veteran, hosting Special Olympics for an on-campus event in the Storm Dome and at Americus-Sumter High School. GSW student-athletes were also involved in Christmas bell ringing for the Salvation Army, assisting with hurricane relief & recovery and reading to students at Southland Academy, Furlow Charter and Head Start at Sumter County Schools.

“I’m really proud of how much time and effort our athletes and coaches put in all year,” GSW Women’s Head Softball Coach Nicki Levering said. Levering also serves as the Assistant Athletic Director for Community Engagement at GSW. “Their efforts to help people in and around the Americus community will help them grow through their college years as they progress towards the future in the career that awaits them,” Levering continued.

The GSW women’s soccer team, women’s cross country and men’s golf teams all reached the 64-team community service tournament and were eliminated in the first or second round of competition.

Georgian Court University took first place in the standings, with Arkansas Tech finishing as the runner-up. Wayne State University and Roberts Wesleyan rounded out the top five behind GSW in the final standings.