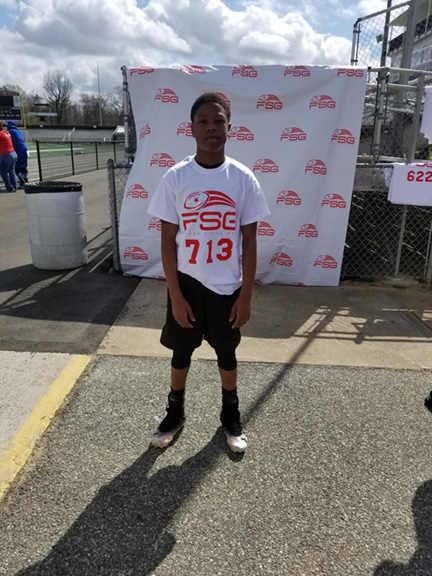 LaVaris Milledge, a seventh grader at Sumter County Middle School, has been chosen to be a member of the Georgia Future Stars Football Team, a team consisting of the best Middle School football players in the state. They will take on the Future Stars Florida team in Boca Raton, FL on Saturday, June 16. Submitted photo

AMERICUS – Twelve-year-old LaVaris Milledge, a seventh grader at Sumter County Middle School, went to try out for the Georgia Future Stars Football Team. The tryout was held at Lee County High School on Sunday, February 25 of this year. Future Stars is an All-Star team that travels throughout the state searching for talented middle school players from sixth through eighth grade. The Georgia Future Stars team will compete against the Florida Future Stars team in Boca Raton, Florida on Saturday, June 16. LaVaris Milledge was among the players chosen to be on the team. “I am so grateful for this opportunity to have been chosen to participate in the Future Stars game,” Milledge said. “Knowing they went around the state of Georgia for the BEST players, and I was chosen as one. My first time trying out and being the only one chosen from Sumter County, I am truly grateful!!!”

Milledge has been playing running back and has played as a defensive back at Sumter County Middle School.