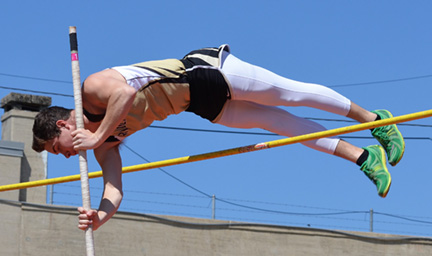 “I was very proud of all the kids. They did a great job,” Southland Head Coach Nathan Hammack said. “We are a fairly young team and the future is bright, but we will miss our seniors: Savannah Banks, Olivia Perry, Sydney Hayes, Bailey James and Karleigh Werling on the girls’ team. On the boys’ team, we will miss Brody Shattles, Logan Morris, Alex Roach, Siage Batten, Jantz Womack, Townsend Ray and Morgan Youngdale. They were great leaders and set a wonderful example for our young athletes.”

Southland’s Clay Owens with his third-place medal after winning third in the state in the boys long jump competition.
Photo by Ken Gustafson

Going into the Boys Pole Vault competition on Friday, April 27th, Brody Shattles came in as the defending GISA AAA defending state champion. However, Shattles barely missed out on repeating. Shattles vaulted a height of 12-06, but was beaten out by Jackson Tennyson of Deerfield-Windsor. Tennyson vaulted 12-09 to win the state championship in the event. “The highest I’ve ever gotten was 12 feet and that was six inches higher,” Shattles said. “I don’t know. I guess I just reached my max. The last jump was, I guess, just a little too close.” Even though Shattles didn’t win the state championship, he broke the school record of 12-03, which was set by Brooks Kitchens back in 1992. Shattles teammate, Logan Morris, was also competing in the same event. Morris finished in seventh place with a vault of 10-00.00. 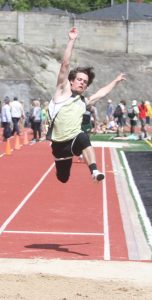 Southland’s Clay Owens finished third in the state in the boys Long Jump competition. Owens set a personal record with a jump of 20.02.00.
Photo by Ken Gustafson

In the AAA Boys Long Jump competition, also done on Friday, April 27th, Southland’s Clay Owens finished in third place in the state, jumping 20-02.00 and setting a new personal record. “It felt good. I got a new personal record,” Owens said. “My old record was 19-05.00. I gave it all I had. I just came up short.” Owens Teammate, Siage Batten, finished in seventh place in the competition. Batten jumped a length of 19-03.50. Owens barely missed making the finals in the AAA Boys 100 Meter Dash. Owens finished in ninth place in the qualifier on Thursday, April 26th, running in a time of 11.76. His teammate, Landon Law, finished in 11th place in Thursday’s qualifier, running in a tine of 11.79. 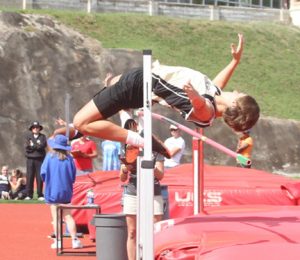 In the Boys High Jump competition, Southland’s Owen Exley finished in a tie for fifth place with T.J. McElhenney of Gatewood. Both jumped a height at 5-06.00. “I went up to 5-06 and I tried to clear 5-08.” Exley went on to say that on his second jump trying to clear 5-08, his feet hit the bar and he wasn’t able to get his feet up in time. Exley’s teammate, Owen Huffsteller, finished in eighth place behind Jonathan Willis of Deerfield-Windsor. 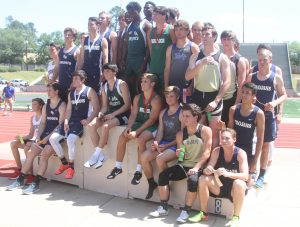 In the AAA Boys 4×100 Meter Relay Finals, Southland finished in sixth place overall with a time of 45.37. The team was made up of Clay Owens, Morgan Youngdale, Alex Roach and Landon Law. As much as he loved running track for the Raiders, Youngdale, a senior, was glad it was over. “I’m just glad to have it over with,” Youndgale said. “No more track for me. I’m done. I’m out.” Landon Law, who ran the anchor leg in the event, believes he could have made the outcome different for the team. “We did all right. If I had leaned at the end, we would have gotten fifth,” Law said.

The finals of the AAA Boys 110 Meter Hurdles took place on Saturday, April 28th. Bennett Carey, having qualified for the finals for the Raiders, was poised and ready for a strong finish, if not becoming the out-right state champion in the event. Carey didn’t win the state championship. However, he ran a strong race, finishing in fourth place with a time of 17.35. Carey attributes his success to a lot of practice and the help of his coaches, but the difference between fourth place and higher came down to clipping the hurdles. “I hit a few hurdles in the middle,” Carey said. “That kind of slowed me down a half second.” 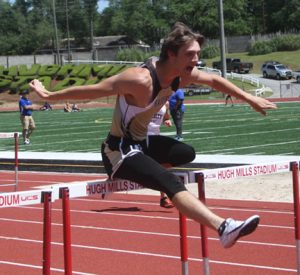 The Southland Lady Raiders finished in 11th place overall with 12 points. They finished in a tie with Valwood and Brookwood. They were up against very stiff competition, especially from their region rivals Deerfield-Windsor, who ended up winning the state championship with 138 points.

However, there were some outstanding individual performances from the Lady Raiders. 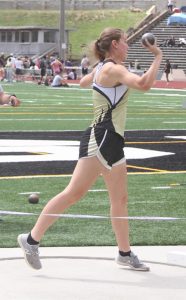 Southland’s Savannah Banks finished second in State in the Girls AAA Shot Put competition with a throw of 34-11.00, breaking a school record that stood for 32 years.
Photo by Ken Gustafson

In the Girls AAA Shot Put competition, Southland’s Savannah Banks finished second in the state with a distance throw of 34-11. With that throw, Banks broke the school record of 34 feet and 7.5 inches set by April Hair back in 1985.

In the Region 3-AAA Meet two weeks ago, Banks finished first, throwing a distance of 32-05.00. She improved her distance in the state meet by two feet and six inches.

In the finals of the Girls AAA 3200 Meter Run, Elizabeth Law finished in eighth place with a time of 13.20.19. “I’ve been working really hard for the past two weeks to get All-State,” Law said. “I just wanted to run my best. I want to give the Lord all the glory because He allows me to do that.”

The qualifying rounds of the AAA Girls 4×400 Meter Relay competition took place on Friday, April 27th. Southland’s team of Lili Dickens, Ryleigh Bell, Calyn Fort, Jadie Burrell, Morgan Minick and Elizabeth Law ran a time of 4:46.30. It was not good enough to qualify for the finals, but the team tried their best and pushed each other. I thought we did good,” Jadie Burrell said. “Whatever happens happens. It won’t matter since we all pushed ourselves.” 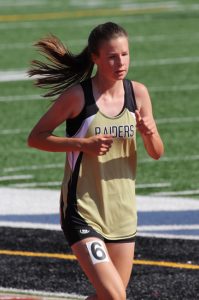 Southland’s Elizabeth Law running in the finals of the AAA Girls 3200 Meters.
Photo by Bret Law 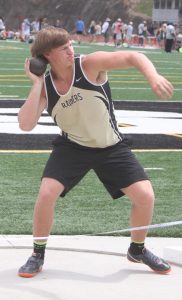 Overall, both the Southland boys and girls track & field teams had an excellent showing at the 2018 GISA State Track & Field Meet. School records were broken, personal records were set and two athletes very nearly won the state championship in their individual events. This looks good for Southland Track & Field in the future. “We will be returning a large part of our nucleus next year and look forward to seeing what they can achieve next season,” Hammack said. 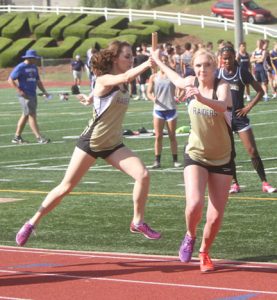 Lili Dickens hands baton off to Calyn Fort in the qualifier of the AAA Girls 4×400 Meter Relay. They were not able to qualify for the finals.
Photo by Ken Gustafson

Coach Hammack also mentioned that his coaching staff has done a great job with the development of the Raider and Lady Raider athletes. “Coach Douglas Parrish did a great job with the jumps this year, placing two boys in long jump and high jump and in the girls with Sydney (Payne) in all three jumps. Coach Brian Miller did an excellent job as his first year on staff, having several distance runners qualify for state and sophomore Ryleigh Bell and Elizabeth Law (eighth grader) placing at the state meet. They are both great coaches and wonderful teachers to our student-athletes.” 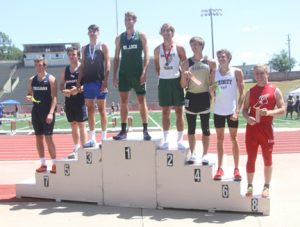 Southland’s Bennet Carey standing on the fourth place stand on the eight-man podium. Carey finished fourth in the state in the AAA Boys 110 Meter Hurdles.
Photo by Ken Gustafson

Based on the performances of both the Southland girls and boys teams in this year’s GISA State Meet, and based on the returning athletes coming back, it can safely be said that the Southland Track & Field program can expect even better success in the future.