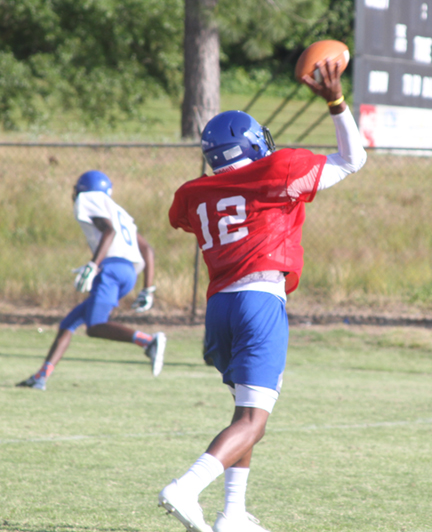 senior quarterback Kierston Harvey about to throw to a wide receiver in an offensive drill. Photo by Ken Gustafson

AMERICUS – The atmosphere was palpable. One could feel the intensity, the heat and the competitive spirit at the very first Spring practice for the Americus-Sumter football team under new head coach Larry Harold.

Coach Harold, along with the rest of his coaching staff, made sure the team hit the ground running on Tuesday, May 1, on the practice field at Americus-Sumter High School. 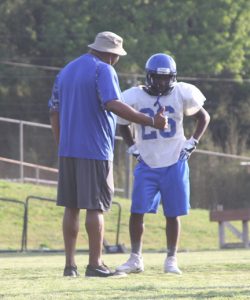 It was everything one would expect in a high school football practice. There was lots of hard hitting. Coaches barked out instructions and yelled at the players, demanding excellence in their execution of plays and effort. Even during water breaks, one could hear coaches yelling at the players to stop walking and to move quickly. If Monday night’s “Meet & Greet” with Coach Harold was the starting line, then Tuesday’s first Spring practice was the first step in a long marathon. The Marathon will go through the rest of the school year, the hot Summer months of June and July, the pre-season practices in the heat of August, and then the start of the long regular season. Coach Harold expects the marathon to end at Mercedes Benz Stadium in Atlanta, where the Panthers hope to claim their first state championship crown since 2000. 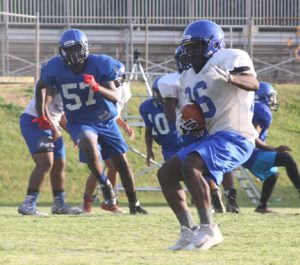 However, as an old Chinese proverb states: “The journey of 1,000 miles begins with the first step.” The Panthers took that first step. According to Coach Harold, it was a rocky step, but one with promise as well. “The biggest thing that we need to work on is our tempo and conditioning,” Harold said. “On offense, we’ve got to get use to our terminology. We want to play at a fast pace. I was happy with the numbers. We had over 85 kids out here today. I thought the defense flew around and did very well. We still need to work on our tackling, but it’s a typical first day.” For Coach Harold, he has been through this before. He has been through the rigors of taking over a new team and trying to mold that team into his way of playing football. “As a new coach, it’s about my fourth time having a first Spring practice,” Harold said. “You kind of know what to expect, but I feel good because the kids are still in good spirits and they are ready to come back out here tomorrow and have a better day.”

The practice went according to any other high school football practice. Players stretched and warmed up, then the offensive and defensive players went to their respective areas to work with their respective coaches. Those on the offense were dressed in white jerseys, while the defensive players were dressed in blue. The linebackers and defensive lineman worked on hitting, blocking and tackling, trying to get use to doing those things and doing them well. The offensive line worked on blocking schemes and worked with the blocking sleds. The quarterbacks, running backs and wide receivers worked on their timing. These are things the Panthers will be working on every day from now until the end of the 2018 season. 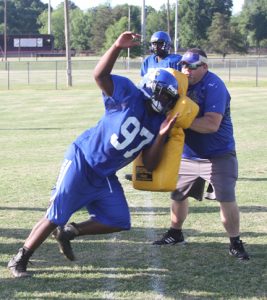 One example of a coach demanding maximum effort from his players came from Assistant Coach Jon Rechtorvic. Rechtorvic was working with the linebackers. As he was teaching them the proper techniques and schemes in playing the position, Rechtorvic made one thing crystal clear to the players: “If you are not ready to hit somebody and if you are not looking for contact, you will not play linebacker,” Rechtorvic told the players. Rechtorvic later told his defensive players, “If you’re going to make a mistake, do it while going 100 miles an hour.”

While he was fairly pleased with the effort from his players on the first day of Spring practice, Rechtorvic would like his defensive players to react quicker to situations and not think as much. “It was pretty good for the first day, a little more thinking than I like,” Rechtorvic said. “I want to see a little more reacting than thinking. I just want them to run to the football and do some damage when we get there, have some fun.” 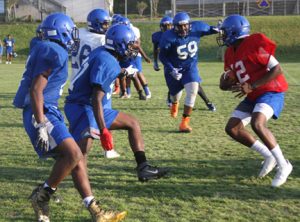 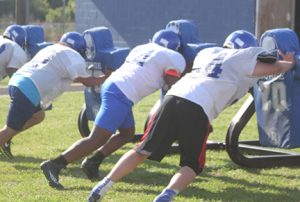 Sophomore running back Christian Wayman was the featured back on a few of those plays. “I think I could have done a little bit better,” Wayman said. “My team, they helped me out a lot today, but at the end of the day, it comes down to team work. We’ve got to keep working to get better.” Coach Harold pulled aside Wayman to give him some pointers on how he can improve on offense.

As of right now, senior quarterback Kierston Harvey is slated to be the starting quarterback for the Panthers when the season opens Friday, August 17, at Crisp County. “I feel like the offense is adjusting pretty well to a new system,” Harvey said. “We’re just now learning how to run it for real. During the Spring, I feel like we are going to get much better and become more like a family and work very, very hard.” According to Harvey, the offense will be transitioning from a spread offense to an RPO (Run-Pass Option) offense. “Last year, we ran a spread offense because we had a great running back in Kobe Lewis. We ran most of our plays through him,” Harvey said. “Now, we are now more like RPO, play-action pass, more like that now.” 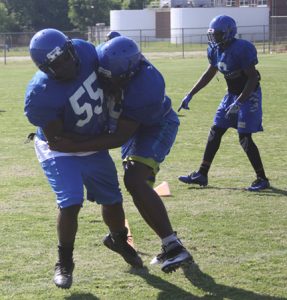 At the end of practice, Coach Harold made it very clear to his players what his expectations are for the 2018 season. “I didn’t come here to be knocked out in the first round,” Harold said. “I expect us to go all the way to Mercedes Benz Stadium.” In 2017, under former head coach Erik Soliday, the Panthers finished 9-3 overall and 7-0 in region 1-AAAA play. They won the region championship and reached the second round of the playoffs before losing in overtime to Thompson 35-34. On Tuesday, May 1, the first step was taken by the Panthers on their long march to Atlanta in December, where they hope to bring a state championship back to Americus.

Results from the 2018 Run Through History at Andersonville…