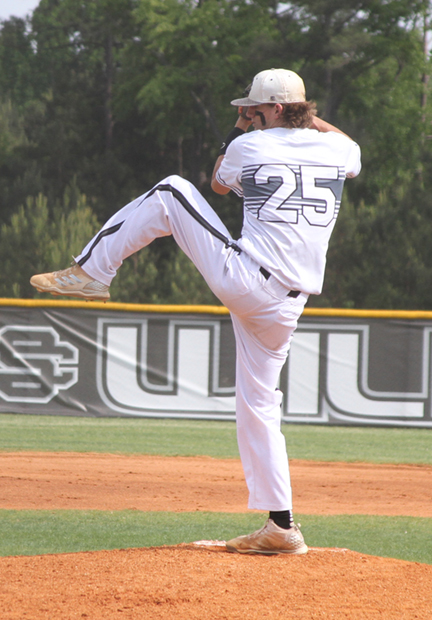 Schley County’s Ashton Goodin was solid on the mound for the Wildcats in Game 1. He also hit a three-run homer in the first game and a two-run homer in the second game. Photo by Ken Gustafson

ELLAVILLE – Schley County’s Ashton Goodin went a combined 3-for-7 in the 6-5 and 15-0 wins over Pelham, but two of those three hits were home runs. Goodin drove in a total of five RBIs to lead the Wildcats (24-2) in a sweep of a doubleheader over Pelham (16-12) in the second round of the GHSA Class A Public Baseball State Playoffs on Monday, May 7, at Schley County High School.

The Wildcats will host the quarterfinals on Friday, May 11, where they will take on either Bowdon or Johnson County.

“Ashton did a good job for us today. He gave us a solid performance on the mound in the first game, and he had some big hits for us,” Schley County head coach Chuck Cheek said. Goodin was the Wildcats’ starting pitcher in the first game of the doubleheader with the Hornets. Goodin worked five and one-third innings, giving up five runs on eight hits. However, he struck out nine batters and walked none. “I’m proud of him. He’s been working hard trying to get better. We’ve been trying to make some adjustments at the plate and he’s done a good job,” Cheek said.

In the first three innings of the first game, it was a pitcher’s duel, with neither team able to score a run. However, the Hornets took the lead in the top of the fourth. Gunner Wisham led off the inning with a double. After Doug Curles flew out for the first out, Cale Whigham hit a double, driving in Wisham for the first run of the game. 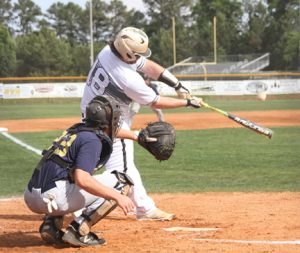 However, that seemed to wake up the Wildcats. In their half of the fourth, they scored six runs on four hits, including a three-run home run by Goodin. A major factor that turned the momentum in the Wildcats’ direction was that Jordan Hall, the lead-off batter, and Dylan Taylor both got on base as a result of being hit by a pitch. It was the turning point of the first game. This gave Schley County the opportunity to capitalize on the mistakes by Pelham starting pitcher Cale Whigham. “We’ve got guys on first and second with nobody out. Vandy (Vanlerberghe) gets the bunt down. A great bunt beats it. We’re safe and the bases are loaded. Wade (Law) comes up and chases a high fastball. He was just trying to do too much there,” Cheek said. “He did a great job with two strikes, lined the ball back up the middle…got us going there. After that, we were able to push across some other runs. Everybody that knows me knows I love small ball. I like to steal. I like to bunt. I like to bunt and run, but it’s got to be the right situation. It’s got to be the right guys up. There were a couple of times tonight where that worked out well for us.” 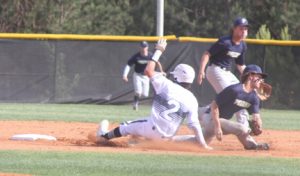 The Hornets did make a comeback in the top of the sixth inning. Wisham led off with a double. After Doug Curles struck out, Whigham singled to center field, driving in Wisham, making the score 6-2 Schley County. Levi Jacobs then singled to center field, driving in Whigham to make it 6-3 Schley County. Austin Davis then singled to right field, scoring Jacobs to cut the Wildcats’ lead to 6-4. Eric Davis then singled, driving in another run to make it 6-5 Schley County. However, Davis tried to stretch it into a double, but was thrown out at second base. That proved to be costly for the Hornets. Dakota McIntyre drew a walk, then tried to steal second base, but was thrown out for the third out of the inning. That play also proved to be costly for Pelham.

The Hornets threatened to tie the ball game in the top of the seventh. With one out, Payne Hunter singled to right field. However, Gunner Wisham lined out to second baseman Camron Vanlerbergeh, and Curles grounded out to end the first game, giving the Wildcats a 6-5 win.

Schley County’s Cameron Belcher went 2-for-4 at the plate in Game 2. He drove in four RBIs as well.
Photo by Ken Gustafson

The Wildcats scored six runs, but only managed to get six hits in the first game and committed one error. Pelham scored five runs on 10 hits and committed no errors. In addition to Goodin’s production at the plate, Wade Law went 2-for-3 in the first game, and drove in two RBIs. Trent Bivins went 1-for-3 and drove in an RBI. Lorne Barineau came on in relief for Goodin. He worked 1.2 innings, didn’t allow any runs and gave up two hits along with a walk.

For Pelham, they were led offensively in the first game by Cale Whigham and Gunner Wisham. Whigham went 2-for-3, scored a run and drove in two RBIs. Wisham went 2-for-4 and scored two runs. Whigham worked six innings on the mound for the Hornets. He gave up six runs on six hits. He walked one and struck out three.

The second game was much more to the liking of Schley County. They got off to a solid start. The Wildcats were the visiting team in Game 2. They scored three runs on two hits in the top of the first, while taking advantage of a hit batsman, a walk and two wild pitches. 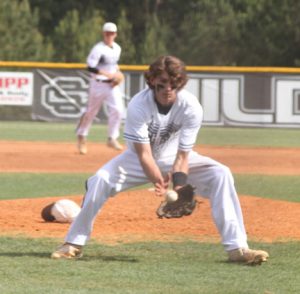 They scored two more runs in the top of the second. Garrett Peavy led off with a base hit, and Trent Bivins laid down a bunt and was able to reach on an error. Jordan Hall reached on a bunt single. Dylan Taylor then grounded into a fielder’s choice, allowing Peavy to score. With runners at first and third with one man out, Camron Vanlerberghe drove in an RBI on a sacrifice fly. Wade Law grounded out to end the inning, but the Wildcats had a 5-0 lead.

The Wildcats used three pitchers in the second game, and all three were able to hold the Hornets at bay. Pelham managed only two hits the entire game. Dylan Taylor started the game for the Wildcats. He worked three innings, allowing no runs and no hits. He walked two and struck out one. Cameron Belcher came on in relief of Taylor. Belcher allowed only one hit, struck out three and walked one. Trent Bivins finished up Game 2 for Schley County. Bivins worked one inning, allowing no runs or hits. He walked none and struck out one.

Schley County would add a run in the third and two runs in the fourth, but the big inning was the top of the sixth. The Wildcats exploded for seven runs on seven hits, including a two-run home run by Goodin, to finish out the 15-0 shutout in Game 2. “We had several guys with some key at bats, Cheek said. “The second game, I hope, is more indicative of how we’re going to play in the playoffs than the first game. The first game was frustrating. Other than one inning, they (Pelham) beat us in that first game. We had that six spot in one inning, and other than that, we didn’t do a whole lot.” 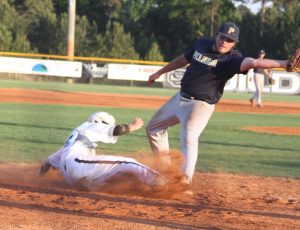 With the big lead, this gave Cheek a chance to play his reserves. One of those reserves was senior Dakota Knight. Knight was in a terrible car accident. “We were at baseball practice, and I had gotten a phone call that he had been in a bad wreck, and it was bad,” Cheek said. “Dakota started some in left field for us last year. That was tough. Whenever we get a chance to get him in the game, we do. He’s had a couple of hits this year for us. He actually had a big hit Senior Day against Crawford County that mattered. He came in and drove the ball to right field.” Coach Cheek went on to say that Knight comes to practice every day and has a tremendous attitude. “He would give anything to be out here with full use of his arms and getting after it. He’s come a long way from where he was.” Cheek went on to say that Knight injured his left shoulder and left arm, along with his leg, foot and ankle. In Knight’s only at bat in the second game, he hit a grounder to the pitcher, who tried to get a force play at second base, but threw it over the head of the second baseman and into center field.

The Wildcats scored 15 runs on 15 hits and committed two errors, while the Hornets were shut out and only managed two hits in the game. They also committed four errors.

The Wildcats will now await the winner between Bowdon and Johnson County. The doubleheader between those two teams, which also took place on Monday, May 7, ended up in a split. Bowdon won the first game 10-6, and Johnson County won the second game 5-4. The third and deciding game will take place Tuesday, May 8, at Bowdon High School. The Wildcats will host either Bowdon or Johnson County on Friday. Game time for the first game of the doubleheader has yet to be determined.