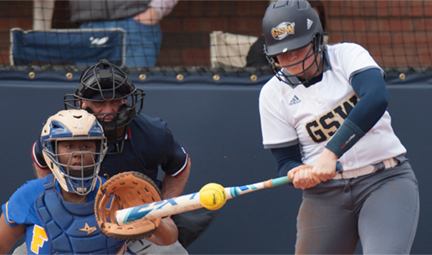 GSW Freshman Shortstop Lauren Kuerzi was one of two GSW players to get hits against North Georgia. Photo by GSW ATR Archive

Dahlonega, GA – The Georgia Southwestern State University Softball Team fell to top-seeded North Georgia 8-0 in the first round of the Peach Belt Conference Tournament played on Friday, May 4, at the University of North Georgia. The Lady Hurricanes end their season at 18-34.

Though her team didn’t win, senior Mikela Barlow reached base on all three of her at bats. Her last at bat as a collegiate player was a triple off the top of the wall.

For the first time since 2013, the Lady Hurricanes qualified for the Peach Belt Conference Tournament under Head Coach Nicki Levering.

However, North Georgia showed why they are the best team in the PBC and one of the best teams in the nation at the NCAA Division II level. The Nighthawks scored six runs in the bottom of the first inning to take control of the game right away. UNG’s Marley Stowers opened the scoring with an inside-the-park home run off of GSW starter Madason Messer. Later in the inning with two outs, Messer gave up a single, a walk and a two-run double, forcing Levering to make a pitching change. Levering brought in Ansley Dean to try to slow down the onslaught of the Nighthawks.

However, North Georgia kept up the pressure. Lexi Duncan singled to keep the inning going for UNG. Duncan then stole third on a throwing error. This was followed by two straight walks and an RBI double by Sydney Sprague made it 6-0 in favor of North Georgia.

GSW couldn’t get anything going offensively against UNG starter Amber Johns. Johns allowed two hits in five innings to notch her 18th win of the season. The only other hit of the day for GSW came off the bat of Lauren Kuerzi. Kuerzi led off the top of the second inning with a double to left center.

Another positive thing to take from this game for GSW was that reliever Shannon Gibson, who came in for Dean, pitched three straight scoreless innings against North Georgia. Gibson allowed only two unearned runs on four hits. The Nighthawks scored two more runs on a throwing error to secure the run-rule win.