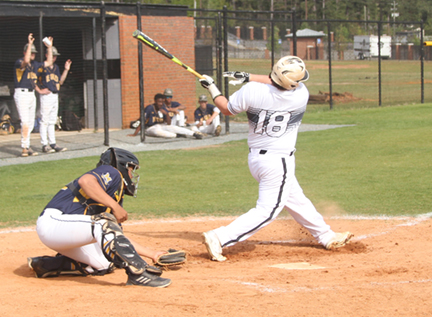 Schley County Senior Catcher Wade Law went a combined 2-for-5 at the plate and drove in two RBIs in the two-game playoff loss to Bowdon. Photo by Ken Gustafson ATR Archive

ELLAVILLE – It was not the ending the Schley County Baseball Team (24-4) was envisioning. The Wildcats had been rolling, winning every game since their 12-2 loss at Brookstone back on Thursday, March 15.

They came into Friday night’s GHSA Class A Public quarterfinal doubleheader against Bowdon with a record of 24-2, and no sign of stopping their winning machine. However, the Red Devils (25-8) came into Ellaville and dealt the Wildcats a season ending, two-game sweep Friday night, May 11. They defeated the Wildcats 6-5 in the first game and took the series with a 5-3 win in the second game on Friday, May 11, at Schley County High School.

“We picked a bad day to have a bad game,” Schley County Head Coach Chuck Cheek said. “I have to give a lot of credit for that to Bowdon. They executed their offense against us better than anyone has this year. We just left too many guys on base. We showed a little spark late in both games. It just wasn’t enough.”

The Wildcats led off the bottom of the seventh when Camron Vanlerberghe reached on an error by Bowdon shortstop Trent Estes. Wade Law struck out swinging for the first out of the inning, but Chance Hollomon singled, advancing Vanlerberghe to second. After Cameron Belcher flew out to center for the second out, Ashton Goodin drew a walk, loading the bases for Lorne Barineau. Barineau then drew a walk, scoring Vanlerberghe. The Wildcats had cut the deficit to 6-2 with two outs and the bases still loaded.

Trent Bivins then doubled to right field, scoring three runs. The tying run was at second base with two outs with the lead-off batter, Jordan Hall, approaching the plate. Unfortunately for Hall and the Wildcats, he was not able to drive in the run. He lined out to right field to end the game.

The Red Devils had done their damage early, scoring two runs in the fourth and one in the fifth, but the big blow came in the seventh when Bowdon scored three runs to give themselves a 6-1 lead. Schley County committed two errors in the game. One of them led to a run for Bowdon.

Schley County seniors Camron Vanlerberghe and Chance Hollomon went 2-for-4 at the plate and both scored a run. Wade Law went 2-for-3 and drove in a run. Schley County used four pitchers in the first game. Ashton Goodin started Game 1 for the Wildcats. He worked four and one-half innings, giving up three earned runs on four hits. He walked three and struck out three.

He was relieved by Dylan Windham, who pitched 1.2 innings. Windham didn’t give up any runs and gave up one hit. He walked two batters and struck out one.

Coleton Pitcock and Ben Fortson led Bowdon in offense. Pitcock went 2-for-5 with two RBIS and Fortson went 2-for-3 at the plate, driving in two RBIs as well.

Luke Rainwater went most of the way for the Red Devils. He pitched 6.2 innings, giving up four runs on 10 hits. One of those four runs were earned. Rainwater struck out five and walked five batters.

With losing Game 1, the Wildcats found themselves with their backs to the wall, having to come out and win the second game, or end their season and their hopes of repeating as state champions.

In the second game, Bowdon would be the home team, giving Schley County the chance to jump on the Red Devils right away. Things got off to a good start for the Wildcats in the top of the first. Jordan Hall reached on an error, then Dylan Taylor was hit by a pitch, putting runners on first and second with nobody out. However, Camron Vanlerberghe bunted into a fielder’s choice double play. After an intentional walk to Wade Law, Chance Hollomon flew out to center field to end the threat.

Bowdon responded by scoring two runs in the bottom of the first. Coleton Pitcock singled to lead off the inning, then Andrew Messer was hit by a pitch from Schley County starter Dylan Taylor. Trent Estes popped out to first and Jarrett Stephens struck out. However, Pitcock stole third base and Messer advanced to second with one out. The Wildcats were one out away from getting out of the inning unharmed. However, Pitcock stole home, then Braden Bowen singled, driving home Messer to give Bowdon an early 2-0 lead. Taylor then walked Trajan Brown, but he struck out Ben Fortson to end the inning without further damage.

Bowdon scored two more runs in the third and one in the fifth. The Wildcat offense struggled against Bowdon pitching. The Wildcats finally got on the board in the top of the sixth inning.

Chance Hollomon struck out to lead off the inning. However, Cameron Belcher doubled to right field, giving the Wildcats and their fans some hope. Ashton Goodin then hit a fly ball to center fielder Ben Fortson, who couldn’t handle it, advancing Belcher to third base with one out. Dylan Windham hit a sacrifice fly, scoring Belcher, making the score 5-1 Bowdon. Trent Bivins then singled, advancing Goodin to second. The Wildcats had runners at first and second with two outs and a chance to get back into the game. However, Jordan Hall popped out to shortstop to end the Wildcats’ threat.

Schley County was able to hold the Red Devils scoreless in the bottom of the sixth, giving the defending state champions one last chance for a come-from-behind win to force a third and deciding Game 3 on Saturday.

Jarrett Stephens was pitching for Bowdon at this time. He walked Dylan Taylor to lead off the top of the seventh for Schley County. Camron Vanlerberghe then reached on an error by right fielder Luke Rainwater. Taylor advanced to third on the error, while Vanlerberghe advanced to second. It was a dream start for the Wildcats in their comeback bid: runners at second and third, no outs and Wade Law at the plate. Law hit into a fielder’s choice, but Taylor scored, cutting the deficit to 5-2 with only one out. Chance Hollomon drew a walk, putting runners at first and second with one out for the Wildcats. Cameron Belcher flew out for the second out of the inning, and Vanlerberghe advanced to third base.

With runners at first and third with two outs, the stage was set for Ashton Goodin. Goodin delivered with a single, scoring Vanlerberghe and bringing Schley County to within two at 5-3.

With runners at first and third and two outs, Dakota Albriton was brought in to pinch hit for Dylan Windham. Albritton hit a hard ground ball to third, but third baseman Braden Bowen was able to field it and throw on to first for the final out of the game and the season for Schley County. Bowdon had won the second game 5-3, sweeping the series and advancing to the state semifinals.

“You can’t give away as many opportunities to score as we did. There’s really no other way around it,” Cheek said. “I hate it for our seniors. They’ve been so good for us this year and we wanted to send them out the right way. I’m still proud of these guys. We lost some great players last year. Coming back to beat Brookstone for the region championship was special. Three region championships and two state titles, this senior class is leaving a pretty good legacy.”

It was difficult in the second game for the Wildcats to get any offense going. They were only able to get three hits in Game 2. Dylan Taylor, Camron Vanlerberghe and Cameron Belcher accounted for the Wildcats’ three hits.