Georgia Southwestern State University and the Sumter County Parks and Recreation Department have reached an agreement which will allow each entity to use each other’s athletic facilities for recreational athletics without rent or charge. Photo by GSW

AMERICUS – Georgia Southwestern State University and the Sumter County Parks and Recreation Department have reached an agreement in which both the university and the SCPRD can use each other’s athletic facilities for the use of recreational athletics free of rent or charge. 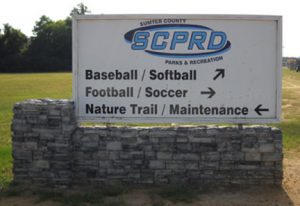 Sumter County Parks and Recreation will allow GSW to use its recreational facilities free of charge as part of an agreement between the two entities.
Photo by SCPRD

Tim Estes, president of the SCPRD, stated at the meeting that he, along with County Attorney Kimberly Reid, had been working on this agreement for quite some time. “We wanted to make sure that this didn’t extend to fraternities and sororities and things like that,” Estes told the Board. “For instance, if we wanted to play the youth basketball out there, we wouldn’t have to pay their rental fee. If their cheerleaders wanted to use our gymnastics center while we weren’t using it to let their cheerleaders work out, we wouldn’t have to charge a fee. It’s the same agreement that we have with the Sumter County School Board,” Estes continued.

Estes also told the Board that he had heard back from Cody King, Vice President of Business and Finance at GSW. Estes stated that King gave his approval of the agreement, and that GSW president, Dr. Neal Weaver, was on board as well. Estes told the Board that GSW Athletic Director Mike Leeder hadn’t seen and signed off on the agreement because he was busy all day interviewing candidates for the baseball coaching job at GSW.

However, on Thursday, May 17, Leeder told the Americus Times-Recorder that he signed off on the agreement on Wednesday, May 16. “I got the proposal yesterday and had the opportunity to go ahead and sign it, and we’re moving forward,” Leeder said. “I think it’s great for the city and the Sumter County Parks and Recreation Department to work with Georgia Southwestern and I’m glad we can be partners. I think it will be beneficial to both entities. I think any time that we can bridge the campus and the community, that’s a good day for both the athletic department here at GSW and the city of Americus,” Leeder Continued.

According to the terms of the agreement approved by the Sumter County Board of Commissioners, the agreement is an annual agreement, but the Board and/or GSW can get out of the lease with a 30 days’ notice.