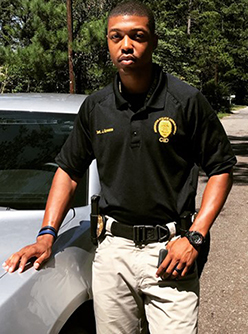 AMERICUS — Joshua Greene, a senior in the bachelor of science criminal justice program at Georgia Southwestern State University (GSW), was recently awarded a scholarship provided by donors who made gifts in memory of two local officers.
Greene works as a detective in the Criminal Investigative Division with the Americus Police Department (APD), a position he landed in early 2017, after a year of patrolling.
“It means a lot to me to have been chosen to receive this scholarship in memory of Nick, who I had the privilege to work beside,” said Greene. APD Officer Nick Smarr and GSW Officer Jody Smith were killed in the line of duty in December 2016.
“Working in this division is actually what made me want to go back to school,” said Greene. “I wanted to learn more about how to deal with high profile cases and was looking for a challenge. The timing was perfect for me to go back, and GSW was the right decision. I loved that the program was online because I worked full-time, and Americus is home.”
Expected to graduate in May 2019, Greene expressed the challenges that come with trying to schedule classes while working full-time and having on-call status. “It’s worth it though; it was definitely the right decision to go back to school. The scholarship provided me the opportunity to purchase textbooks for my upcoming summer classes.”
“Detective Greene has been a member of the APD family for almost three years,” said Americus Police Chief Mark Scott. “In that time, he has distinguished himself in both his personal and professional life. His energy and positive attitude are infectious and we are proud of his accomplishments. I feel he is an excellent choice for this scholarship as he works to further his education.”
Born and raised in Americus, Greene graduated from Americus-Sumter High School in 2008, and completed his core classes in general studies at GSW shortly after. He took a break from school working various jobs, then enlisted in the National Guard in 2012, of which he is still an active member. He graduated from Law Enforcement Academy from South Georgia Technical School in December 2015, and received his associate’s degree in criminal justice in June 2015.
Greene is married to Chantel, and they have an 8-year -old daughter, Zsameria, who refers to the other investigators in Greene’s department as “uncles.”