Conditioning drills the order of the day for Americus-Sumter football 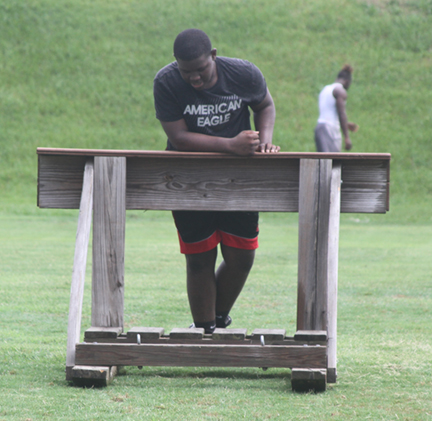 AMERICUS – On Tuesday, May 22, the Americus-Sumter football team continued their Spring workouts. However, the emphasis was on “workouts.”  The Panthers went through what many football fans never see, but what the players went through was necessary for them to get to where they want to be come playoff time: conditioning.

The players did not practice with pads. The Georgia High School Association has a limit on how many days teams can practice in pads during the Spring. On this particular day, it was all conditioning.

It began with players kicking up their legs through hurdles for the purpose of stretching their quads. While that was going on, another group of players worked out a quick pace in the weight room, lifting several repetitions. The groups would rotate. There was also the pushing of wooden sleds from one end of the practice field to the to the other. “Let’s go! Don’t quit!” the coaches would yell in order to motivate the players. 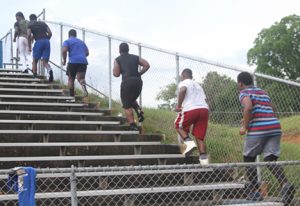 Fortunately for the team, some rain passed through, making the temperatures cooler than on other days of this month. 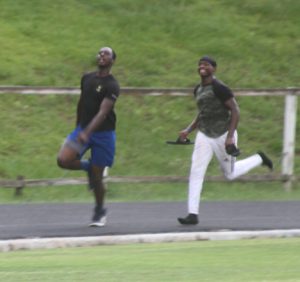 While there were no hitting drills, passing drills or any plays being practiced, according to the coaches, while it’s very early, players are competing hard for spots. “We’ve got a lot of young guys right now. We’re still trying to figure out who’s going to be our starters,” Offensive Line Coach Kentrell Mercer said. “Right now, we have Kameron Dunnings. He’s currently a freshman. He’s going to be a sophomore next year. He’s going to be very big for us. We have Jamal Asberry. He’s going to be a good competitor for us on the offensive line. They’re all big kids, so we’ve got some young, athletic big kids coming along. We’re just trying to figure out how things are going to shape up and mod. After that, we’ll see. We’ll go through the Summer and see who’s going to compete and who has a shot at starting. Right now, we still have a lot of open positions.” 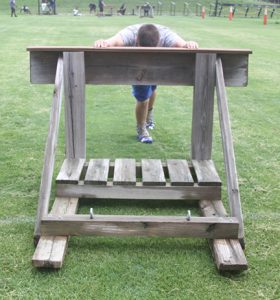 On the defensive end, senior Henry Wilson’s name was mentioned by two defensive coaches: John Rechtorvic and Mark Prater. Rechtorvic, who has been coaching the line backers this Spring, said Wilson has been learning a new position, but is doing a good job. “Henry Wilson is doing a good job trying to learn a new position. He’s getting better at his spot,” Rechtorvic said. “Bradley Perry is working hard at outside linebacker. Jordan Wiley is working good at inside Line Backer. “Rechtorvic went on to say that Mike Flemming will be a good bonus for them.

Mark Prater, who has been coaching the defensive line this Spring, also mentioned that Henry Wilson has been doing well in Spring drills. 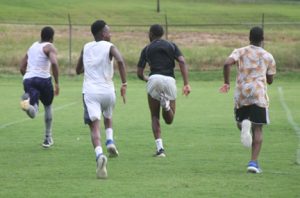 For Head Coach Larry Harold, right now, it’s about getting the players acclimated to the Summer conditioning program. “Guys are getting acclimated to our off-season Summer conditioning program,” Coach Harold said. “They’re excited. We’re excited…just happy to be out here. We’ve got some good numbers. We’re ready to go to work.” Assistant Coach Jeff Ridley has been coaching the defensive backs during the Spring. Right now, he believes the competition for spot is pretty even. “They’re pretty much even right now,” Ridley said. “We have a couple of guys that got a lot of playing time last year, so it’s pretty much even right now. We’ve got some guys who filled in last year when guys got hurt, so everybody’s pretty much on an even plain right now. If I had to say anything, it would be Tre Thomas at Safety.”

As of right now, senior quarterback Kierston Harvey is slated to be the starting quarterback for the Panthers. He wants the fans to know that what they did at practice on Tuesday, May 22, shows that they have what it takes to go all the way. “What you saw today, that should show you that we have the heart and determination to have a winning season this year,” Harvey said. “Name another team that you know that worked in the rain as hard as we did? I don’t see anyone else doing that.”

There will be several camps coming up for the Panthers this Summer, including one at the University of Georgia and one at Greater Atlanta Christian School in Norcross, GA on July 12. These will be more opportunities for guys to show what they can do and to compete for starting spots.