AMERICUS — Byron Police Chief Wesley Cannon was the speaker at the South Georgia Technical College’s (SGTC) 22nd Law Enforcement Academy (LEA) graduation recently. Thirteen graduates of the SGTC Law Enforcement Class 18-01 were recognized and received their Peace Officer Standards and Training (POST) Certification.
The graduates of SGTC’s LEA Class 18 -01 included: Zackary Ty Bearden of Americus, Andrew C. Brown of Albany, William Shelby Cloniger of Butler, Vivian M. Garcia-Aguirre of Americus, Gregory Guerra of Americus, Zachary J. Harris of Oakfield, Ashley Lynn Kokekangplue of Vienna, King W. Mitchell of Americus, Dustin Morgan Morris of Tifton, Santiago M. Rueda of Americus, Brandon Markise Thomas of Americus, Dakota James Windham of Butler, and Dalton Lee Windham of Ellaville.
Chief Cannon, who has been with the Byron Police Department since June 1994, congratulated each of the cadets for completing the police academy and for their willingness to serve in the Law Enforcement profession. He also challenged them to approach their job using the “Golden Rule.”
“Do unto others as you would have them do unto you,” said Cannon. “Or even better yet, treat people the way that you would want your mother treated. Sometimes people will not allow you to do that, but most times you can do your job and make it a friendly encounter.”
Cannon then recounted a story of an arrest that he made as a very young officer. The individual fled on foot and Cannon gave chase and caught him. “He did not resist after I caught him. I treated him with integrity and dignity. He did go to jail and serve time. Now fast forward many years later, I found myself in a dangerous situation and was outnumbered about 20 to 1. This same individual happened to be in the crowd and stepped forward and told everyone to leave me alone. I think he remembered how I had treated him many years earlier. If he had not stepped forward, I don’t know what would have happened. You can still do your job and treat people with respect.”
Cannon then thanked each of the individuals for choosing this career “to make a better life for our children and for the ones who can’t protect themselves. You are here and you are choosing this career of truth and justice. I thank you for that choice,” said Cannon.
Cannon then read the Law Enforcement Oath of Honor printed on the back of the program and encouraged the young cadets to commit that oath to memory and even more importantly to live the oath that says, “On my honor, I will never betray my badge, my integrity, my character or the public trust. I will always have the courage to hold myself and others accountable for our actions. I will always uphold the constitution, my community and the agency I serve.”
A tremendous crowd of over 300 law enforcement officers, family, and friends of the graduates were on hand for the ceremony where John Watford, Ed.D., SGTC president, welcomed individuals to the event, and recognized the cadets and their families as well as the individual law enforcement agencies and individuals at the graduation ceremony. 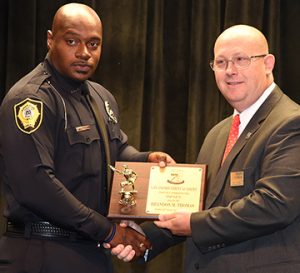 SGTC LEA Academy Director Brett Murray is shown at right presenting Brandon Markise Thomas of Americus with the Top Gun Award for the Class of 18-01.

Following Cannon’s speech, SGTC Law Enforcement Academy Director Brett Murray and SGTC Dean of Academic Affairs Vanessa Wall presented special awards to the cadets. Cadet Brandon Markise Thomas of Americus was presented the Top Gun Award for excelling on the firing range. Cadet Dustin Morgan Morris of Tifton received the Academic Excellence Award for receiving the highest grade average for the class and Dalton Lee Windham of Ellaville was selected by his classmates to serve as the Class Representative and made remarks to the crowd on their behalf.
Windham thanked the instructors, administrators, and family and friends for their support over the 18-week process that laid a foundation for their law enforcement careers. He also thanked SGTC for this program and opportunity.
Six students were recognized as scholarship recipients from class 18-01. Vivian M. Garcia-Aguirre of Americus was presented with the Lt. Michael Sangster Law Enforcement Academy Scholarship. Sangster’s mother, Connie Sangster Youngblood, his sister, Melissa, and his father, Bob, were on hand to make the presentation with Director Murray.
Three additional scholarships were awarded at the program as well. King W. Mitchell of Americus was presented with the Smarr-Smith Scholarship for Law Enforcement Academy students. Then Antoinette Johnson of the Sumter County Sheriff’s Office and Emerson R. Lundy of the Dooly County Sheriff’s Office were both presented with Smarr-Smith Scholarships for criminal justice students. Johnson and Lundy, who are already certified POST officers, are completing their associate degree in criminal justice from SGTC. All three of these scholarships were endowed and awarded in memory of fallen Americus Police Office Nicholas R. Smarr and Georgia Southwestern State University Campus Safety Officer Jody C. Smith. Smith’s mother, Sharron Smith Johnson and his stepfather, Paul Johnson, were on hand to help present these scholarship awards. SGTC Foundation Trustee retired Judge George Peagler also helped with the scholarship presentations.
Cadet Zachary Harris gave the invocation at the graduation ceremony and led the crowd in the Pledge of Allegiance, and Cadet Dustin Morris closed the program with the Benediction.
South Georgia Tech is one of six technical colleges in Georgia that are allowed to provide training for new law enforcement officers to receive their basic law enforcement training and obtain college credit at the same time. The cadets undergo 18 weeks and over 700 hours of intense training mentally and physically.