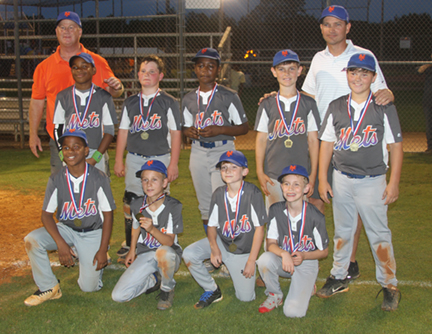 AMERICUS – It was a slug fest between two teams that desperately wanted to claim the Sumter County Parks and Recreation 10u baseball championship. However, the 10u Mets came out on top, beating the 10u Angels 25-16 and claiming the title Thursday night, May 24, at the SCPRD baseball complex. 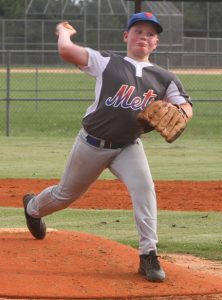 At this level of youth baseball, if a team scores five runs in an inning, that team’s at bat ends and the other team comes to bat. It is this way for the first five innings of the six-inning game.

The 10u Mets batted first and scored five runs in the top of the first inning. One of those runs came off the bat of third baseman Jordan Minter, who singled and drove in an RBI. 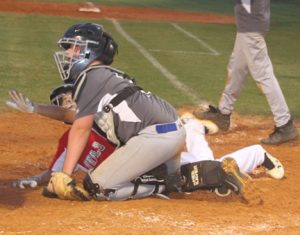 : Hunter Scott of the Mets tries to tag out Thomas Fowler at the plate. Fowler is ruled safe.
Photo by Ken Gustafson

The 10u Angels responded in their half of the first. Jayden Carson and Sterling Blanchard both led off with singles. Jackson Wilder, who was the starting pitcher for the Angels, drove in an RBI on a fielder’s choice. The Angels scored four more runs, and the two teams were deadlocked at 5-5 after the first inning.

The Mets responded with two runs in the top of the second. Hunter Scott led off with a single. Then Allen Styck hit into a fielder’s choice. After Donovan Minter drew a walk, Jordan Minter reached on an error. Styck and Donovan Minter both scored on the play to give the Mets a 7-5 lead. However, with one out, Angels starting pitcher Jackson Wilder struck out the next two batters to end the inning. 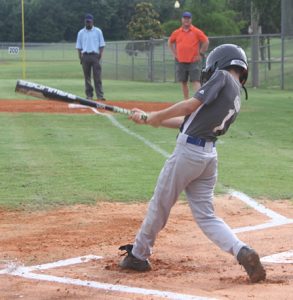 10u Mets first baseman Payton Gilbert went 3-for-5 at the plate and drove in two RBIs.
Photo by Ken Gustafson

The 10u Angels responded in the bottom of the second with one run. With one out, Jayden Carson singled, made it to second on a wild pitch, then stole third base. After Blanchard drew a walk, Jackson Wilder hit into a fielder’s choice, scoring Carson.

The Mets were able to score one run in the top of the third to give themselves an 8-6 lead. However, they added to their lead in the top of the fourth by scoring five runs on four hits. At that point, the 10u Mets led 13-6. 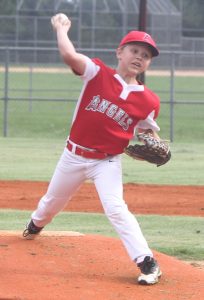 However, the Angels didn’t go quietly. In the bottom of the fifth inning, they scored five runs on one hit. That hit was an inside-the-park home run by Wilder. The 10u Angels also benefited by drawing seven walks, resulting in four more runs being scored.

However, the 10u Mets blew it open in the top of the sixth inning. They scored 12 runs on three hits and benefited from several walks. At this point, the Mets were firmly in control 25-11 with just three outs to go before claiming the championship.

However, the 10u Angels did not quit. In the bottom of the sixth, they scored five runs and benefited from several walks. However, it was not enough as the 10u Mets won the championship 25-16.

“WE played half-way decent. We made some mistakes,” 10u Angels coach Craig Potter said. “That’s just all part of being nine and 10 years old. I’m still proud of the boys. They played well and didn’t give up.”