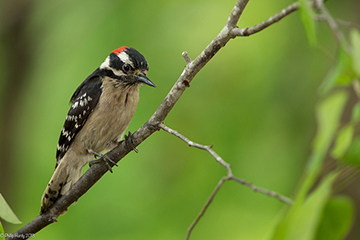 Even the smallest of us demand our attention at times. If you ever had or have been around pre-school children you know what I mean. But I’m not referring to humans in this column. I want to reveal our tiniest woodpecker to you — the diminutive and cute Downy Woodpecker.
The smallest of all North American Woodpeckers, the Downy is found in all states (except Hawaii) and throughout Canada. Although they prefer forest habitats, they adapt well in rural and urban locations. Downies are not known to be migratory.
As do all woodpeckers, the Downy Woodpecker excavates its own cavity in a dead tree or limb. The nest is lined with wood chips and anywhere from three to seven white eggs are laid. Both sexes take turns incubating. Incubation lasts 12 days.
Downy Woodpeckers roost in tree cavities. I had at least one individual roost in a blue bird nest box in our backyard one recent winter. Like clockwork my Downy would arrive at a maple tree adjacent to the nest box in the late afternoon. Carefully he scrutinized the surroundings before he flew to the post the nest box was mounted on. Again, he carefully hitched up the post reviewing every square inch before his first peek into the entrance hole. Only after several glances inside the nest box did he become convinced there was no danger. He then would enter the safety and security of the nest box. Once inside he popped his head out of the entry hole a few times as if he wanted to see if anyone witnessed his hiding spot and disappearance act.
Downy Woodpeckers’ diet consists mostly of insects, arthropods and small seeds. Usually males forage higher in trees than do females. Downies are easily attracted to bird feeders where they will eat sunflower seeds, suet, peanuts, sugar water and even fruit.
When foraging on trees, Downy Woodpeckers “hitch” upwards easily because of very stiff tail feathers they use to prop themselves in a vertical position. Their zygodactyl toe arrangement (two toes face forward and two toes face to the rear) facilitate walking on vertical surfaces. Woodpeckers walk very poorly and prefer to hop or fly instead.
Because of their small size, Downy Woodpeckers can forage on weedy stems and very thin tree branches. So you may ask, “Why would they want to do that? I thought woodpeckers hammer on dead trees.”
Well they certainly do hammer on dead trees. But Downies are small enough that they can exploit very thin limbs that larger woodpeckers can’t forage on in search of insects and their eggs.
Most of us are familiar with a perennial known as goldenrod that paints landscapes yellow during the fall. Did you know that goldenrod acts as a host plant to a vast array of insects? Around December, Downy Woodpeckers search out goldenrod plants, especially those that have a ball gall on the stem. These galls contain the larvae of an insect the woodpeckers devour with gusto. As kids we would pick those stalks and use them as clubs when playing cowboys and Indians. Little did I know back then that I might be depriving a Downy woodpecker of a meal!
Perhaps you are familiar with the Downy Woodpecker. If not, their small size and black-and-white pattern is a dead give-away. Adults are mostly black on their upper parts and white on the throat and belly. The head has alternating black-and-white stripes. The wings have white spots on black feathers. Males are distinguished from females by a red patch of feathers on the nape.
Downy Woodpeckers look similar to the larger Hairy Woodpecker but Downies have a short, stubby bill that is shorter than the head. Downies are also less fearful of humans than the look-alike Hairy Woodpecker. Often I have had Downy Woodpeckers land right on my bird feeders as I refill them.
Currently we have a mated pair that visit our feeders many times each day. If they can only avoid the neighborhood predators perhaps soon they will introduce their young to my feeders giving me and my wife hours of entertainment.
Take time to enjoy our wild birds and remember to keep your cats indoors.

Phil Hardy is a bird watcher and photographer. He lives in Americus.

Oh where, oh where, does our recycling go?