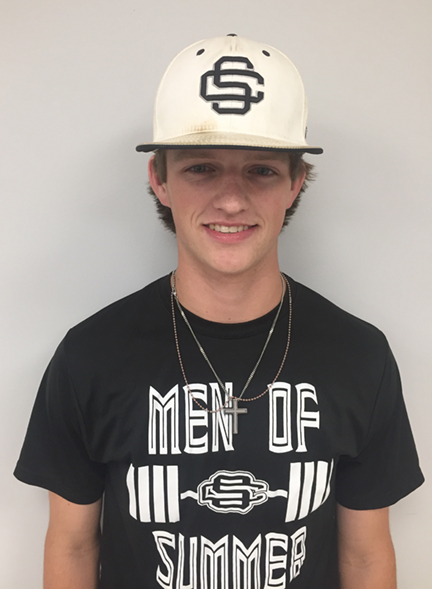 Garrett Peavy, a standout football and baseball player at Schley County, sat down for an interview with the Americus Times-Recorder. Photo by Ken Gustafson

ELLAVILLE – Schley County football and baseball standout Garrett Peavy is a busy man these days. As a member of the Wildcats’ baseball team, he recently helped lead Schley County (24-4) to another region championship, and to the state quarterfinals of the GHSA Class A Public playoffs, in which they lost to Bowdon in a two-game sweep.

Peavy, a rising junior, is also the starting quarterback on the football team. In 2017, he led the Wildcats into the state playoffs before they lost a 22-21 heartbreaker to Mitchell County in the first round.

Born in Americus on February 25, 2002, Peavy is the son of Tim and Paige Peavy. Tim Peavy is the defensive coordinator for the Schley County football team. Paige works at People’s Bank in Ellaville. “I was born in Americus and lived there for four years,” Peavy said. “Then we moved to Ellaville, so I’ve been here all of my life pretty much since preschool.”

Peavy got accustomed to playing quarterback and really liked it, mainly because he liked being in control. “I like being in control so that I can help my teammates win,” Peavy said. 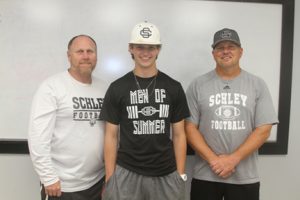 An only child, Peavy grew up in a coach’s home. He said that his father was hard on him at times, but he got used to it. His father, Defensive Coordinator Tim Peavy, tried not to coach his son at home, but at times, that was hard not to do. “Sometimes you try not to be a coach at home,” Coach Peavy said. “I find myself trying to coach him at home a lot of the time, but he’s a great kid. He does whatever you ask him to do. Sometimes you have to prod him a little bit, but he’s really a good kid and he works hard. It makes my job somewhat easy.”

Other than sports, Peavy likes to hunt, fish and play video games. He’s killed a few Deer while growing up. “I shot one here in Ellaville behind my house,” Peavy said.

As far as the biggest, most exciting thing that has happened in his life, the 16-year-old said that being named the starting quarterback for Schley County was the most exciting thing that has happened to him. “It would probably be starting at quarterback at such a young age. It’s just kind of overwhelming, but I like it. It’s nice,” Peavy said. As a sophomore in 2017, Peavy started at quarterback in 11 games for Schley County. He completed 38 passes out of 81 attempts for 475 yards and threw four touchdowns passes. In spite of the unfortunate ending to the 2017 football season, for Peavy, he personally believes he learned some valuable lessons. “Having your teammates’ back, being there for your brothers. I just got close to everybody on the team,” Peavy said. “Everybody on the team is friends with each other. We had each other’s back. We were there for each other and we just played for one another.”

With the experience of last year under his belt, along with more training over the Summer, it can be expected that Peavy will improve upon last year’s success. Head Coach Darren Alford has been extremely pleased with Peavy’s growth and development, as well as his willingness to be coachable. “It’s been really fun to coach him. Garrett’s a really good kid. He does what he’s told. He tries hard. He gives great effort,” Alford said. “This year, he received my hustle award because Garrett is always the first guy in sprints. When we’re out there working, he’s going to be doing things wide open. He very seldom takes plays off and tries very hard. It’s been a pleasure to coach him so far. I’m looking forward to the next couple of years seeing what we can do here.” The feeling has been mutual for Peavy. “He’s a great coach,” Peavy said. “He’s brought this program together. He’s built it up. I think we can do really good this year. I think we can win state.” 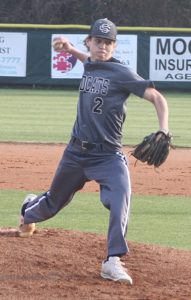 Garrett Peavy pitching against Westfield on Friday, March 23 at Westfield. The Wildcats won that game 4-2 in 12 innings.
ATR Archive

Currently, Peavy is hard at work getting ready for the upcoming 2018 season. “I’m not missing a day of workouts. I’m working hard every day. I just want to get better every day that passes and see where it takes me,” Peavy said. Peavy went on to say that his greatest moment as a football player was making it to the state playoffs last year. “That was huge for our program,” Peavy said. “Having everybody at the games, seeing everybody at the games supporting us. You know, it’s been so long since we’ve made such a good run. It meant a lot.”

As a baseball player, Peavy had a solid season for the Wildcats, particularly as a pitcher. Peavy went 3-0 on the season and posted a 1.737 ERA with 20 strikeouts. He also batted .315, drove in eight RBIs and scored 16 runs. For Peavy, winning the state championship in 2017 was the highlight of his career. For this year, his most memorable moment was winning the region championship with an 8-3 win over Brookstone on Friday, May 11. In spite of the recent success in the past two years, Peavy believes he still has much to improve on as a player. “I need to know the game better. I need to be a student of the game,” Peavy said. “I need to get better mentally. I think that if I do that, I’ll be a much better player than I was this year.”

Peavy said that other than winning the state championship two years ago, and winning the region championship this year, for him personally, driving in the winning runs against Crisp County was a special moment for him. That game was played on Thursday, March 1, at Schley County. As Peavy described it, there were runners on second and third in the bottom of the seventh, and the score was tied 1-1. Peavy hit a ground ball between shortstop and third base and into left field for a base hit. Two runs scored, and Schley County won the game 3-1 on Peavy’s single.

Peavy went on to say that he has great love and respect for head baseball coach Chuck Cheek. “He’s a great coach. He works us hard every day,” Peavy said. “I wouldn’t want to play for any other coach than Coach Cheek.”

As far as his favorite academic subjects are concerned, Peavy said History is his favorite, in particular, American History. Peavy went on to say that he particularly likes studying World War II History. He says that his least favorite subject is Math. As far as his philosophy of life, or how one should live his or her life is concerned, Peavy’s belief is pretty simple. “Work hard. Stay in school. Don’t do anything stupid and make smart decisions,” Peavy said.

As far as food is concerned, Peavy says his favorite dessert is banana pudding, but that’s not all. “I like spaghetti. I like steak…all kinds of meat. I love meat,” Peavy said. “I don’t like vegetables. They’re gross.”

As far as his plans for college and the future, Peavy said that he would like to go to any NCAA Division I college and play football or baseball. He’s not sure if he wants to play both. “I don’t know about that. I kind of need a break,” Peavy said. “I’ve got a girlfriend.” Peavy’s girlfriend is Abbie Phillips, a cheerleader who will be a senior this Fall at Schley County.

However, he did say that he would be content to go to Georgia Southwestern State University and play baseball there. “I’m not sure what I would major in yet,” Peavy said. “When I graduate, I would like to be a missionary and travel the world.”