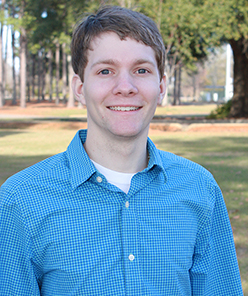 AMERICUS — Georgia Southwestern State University (GSW) business student Carson Fields of Bogart recently placed second in The Business Strategy Game Tournament of Champions, an online simulation where students create “companies” and compete against other university teams from around the world.
“GSW teams have traditionally done well against much larger universities. I believe this is indicative of the quality of our School of Business graduates” said strategic marketing professor Robert Bennett, Ph.D. “Carson did especially well in the Tournament of Champions, competing head-to-head against teams from around the world, which is a significant achievement.”
Fields, a recent graduate with honors from the School of Business, first competed in the simulation as part of his strategic management capstone class during the Spring 2018 semester. The game advances by one “year” each week for 10 weeks, allowing teams to make marketing, distribution and other business decisions for their “companies” each week for 10 simulated years.
Fields and his teammates Ashleigh Grey, Jared Jones and Shyra Lynch managed the top athletic shoe “company” in their class during the simulation. They did well among the 6,500 other teams competing worldwide during the spring semester, finishing 31st in overall score, 7th in earnings per share, 65th in return on investment and 4th in stock price. As part of the winning team in his class, Fields was invited to participate in the Tournament of Champions.
“The Tournament of Champions is significantly harder due to the fact that one is playing against 11 other people or teams who also won their class simulations,” noted Fields. “Overall, my objective for both simulations was to have a low-cost strategy to my competition. My shoe companies tried to offer my ‘customers’ as many styles as possible, while giving them the best quality for the cost.”
However, Fields did not start out quite as strong as he finished. By the third week of the Tournament, his “company,” Everyday Crocs, was nearly bankrupt.
“I severely underestimated my competition,” added Fields. “After three ‘years’, my company was in last place out of the 12 teams competing, and I was ever so close to going bankrupt and being completely out of the simulation.”
Fields said that after a few strategy changes and paying off debts, he was able to finish as the top team in the simulation and overall in second place.
“I think the company might have overloaded in debt early on but was able to make a very nice recovery,” said Bennett. “They forged a very successful strategy in a very crowded industry.”
Bennett noted that in the final year of the Tournament, Fields’ company had “made $100 million in profit, posted extraordinary earning per share, return on equity, and stock price.”
“Had I been off to a better start or had two more years, I think I would have very likely won the simulation,” said Fields.
Fields’ “company” finished the Tournament of Champions on May 11 with the highest earnings per share and return on investment and the second highest stock price.
As a recent GSW graduate, Fields will be putting his business skills to use in a new job at the Georgia Department of Audits in his hometown of Bogart. He plans to further his education in financial planning online at the University of Georgia, take the Certified Financial Planner exam, and eventually open his own tax and financial planning firm.