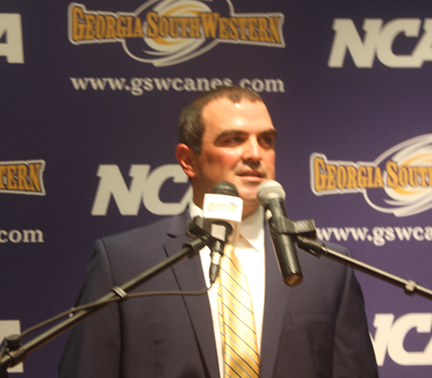 Former Georgia Southern Assistant and GSW alum Josh McDonald has been hired as the new baseball coach of the Hurricanes. Photo by Ken Gustafson

AMERICUS – As of Friday afternoon, June 1, at 1 p.m., a new era in the GSW baseball program has begun.  Josh McDonald was named the new head baseball coach at GSW at a press conference held at the Carter 1 Building on the GSW campus.

McDonald comes to GSW from Georgia Southern, where he was a volunteer assistant coach since 2011. According to Georgia Southern’s athletic website: gseagles.com, while at Georgia Southern, McDonald worked primarily with the catchers and hitters, coached first base and helped coordinate the Eagle baseball camps. Before coming to Georgia Southern in 2011, McDonald served as the hitting coach at Louisiana State University Eunice, where he served as hitting instructor, worked with the catchers and coached third base. In three seasons, the LSU-Eunice Bengals went 148-40 and captured a junior college national championship in 2010, along with a third-place finish in the NJCAA Division II National Championship in 2009. While at LSU-Eunice for three seasons, McDonald coached several players who continued their baseball careers at four-year schools. McDonald also coached several players who were drafted by Major League Baseball teams.

Before McDonald was introduced, GSW Athletic Director Mike Leeder addressed the crowd assembled. “I’d like to welcome everybody today to the campus of Georgia Southwestern State University,” Leeder said. “I’d like to first start off by thanking the Dean of the School of Nursing, Sandra Daniel, for allowing us to use such a beautiful venue for today’s press conference. I also want to thank the search committee. We tried to get this done in a very quick amount of time. June 1 was the target that we set to name a coach. It’s an aggressive timeline.” Leeder went on to thank Associate Athletic Director Christie Ward, who chaired the search committee. He also thanked Men’s Head Basketball Coach Ben Hicks, Women’s Head Softball Coach Nicki Levering, Assistant Athletic Director Keith Michlig, Admissions Counselor Tyler Pennington and Faculty Athletic Representative Michelle Ragsdale. “We had over 100 inquiries about the position here,” Leeder said. “That was exciting, not only in the quantity of candidates, but in the quality as well. We had a tremendous pool to choose from, and it just shows, I think, the trajectory of Georgia Southwestern, not only in the athletic department, but that the university is on.” Leeder went on to say that it was an exciting time to see the interest in the vacancy that the university had for its baseball program. “As we looked, and we created a profile for what we wanted in a baseball coach, we quickly determined as a committee that we wanted a head coach that understood the importance of his direct involvement in recruiting,” Leeder said. “In a league as competitive as the Peach Belt Conference, recruiting is the life blood of competitive success. We looked for a coach that had a proven track record of such success, and we were able to find that gentleman in Josh McDonald.” Leeder went on to say that not only is Josh McDonald a producer in recruiting, but that he is a GSW alum who played for the Hurricanes from 2001 to 2006. With that, Leeder introduced McDonald to the crowd assembled.

“First of all, I just want to thank you guys for coming out,” McDonald said. “this is a special day for me. It’s something that I’ve worked to obtain for quite a bit of time. I want to thank Dr. Weaver and Mike Leeder for giving me this opportunity. It’s always exciting for me when you have a president and an athletic director that has a vision and high expectations for the program and the department. Talking with those guys, I think my expectations are ones that match right well. I look forward to leading this program in that same direction.”

McDonald went on to say that family is important to him, and that it’s definitely the reason he is where he’s at today.  He said that his wife Christie and his daughter Lanier are two of the biggest fans of Georgia Southwestern right now. “Christie has been with me for 10 of my 12 years in this profession,” McDonald said. “She’s someone that has pushed me to where I am today during the bad times and the good times. She’s definitely a big part of my success. Hopefully, as Lanier gets a little bit older, they can kind of tag team it together.” McDonald also thanked his parents, who were in the room to celebrate his being hired as the new head baseball coach at Georgia Southwestern State.

McDonald made it very clear that his expectations are extremely high for the GSW Baseball Program. “The expectations for this program, and my expectations. They’re going to be set really high,” McDonald said. “When I set expectations, I set them to what the ultimate prize is, what everybody else is going after. The phrase that you will hear a lot with this program is ‘Deserve to win.’ If you think about it, it’s pretty simple. Whatever we’re doing, whether it’s on the field or in the class room, in the community, whatever it is, we want to ask ourselves the question: At the end of the day, did we deserve to win?”

McDonald went on to say that if he and his team can go about their business the right way and do things right, then the answer to that question will be yes. “If we can answer yes to that question, then we put ourselves in a pretty good position to be successful, both on the field and off,” McDonald said. “I have an acronym for CANES with some words that we’re going to use a lot: The C is competitive. We’re going to compete in everything we do, whether it’s in the class room, in the community, on the field, there’s going to be a competitive mind set.” 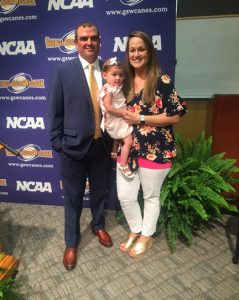 McDonald said that he talked with some of the players and told them that they need to expect to win right now, not just on the field, but in everything that they do. He went on to say that the “A” means accountability. “If you look at any great team, there’s always accountability within the team,” McDonald said. “That’s not just for the players. That’s for the coaching staff as well.” McDonald said that the “N” is for being nationally recognized. “I think that being in the Peach Belt Conference, at the Division II level, if you look at it from a baseball standpoint, it’s probably one of, if not the best conference at this division, McDonald said. “For us, our expectations are going to be to compete for a championship in that conference and I think if you do that, then you’re automatically nationally recognized, and once you are nationally recognized, you’re competing for the ultimate prize of a national championship. That’s going to be our goal from day one.”

McDonald continued describing his acronym. He said that the “E” stands for excellence. “That kind of goes back to the ‘Deserve to win’ mentality,” McDonald said. “Everything that we do, we’re going to be excellent in. I think that if we can create that culture and that mindset from day one, it will continue to grow, and at the end of the day, we can answer yes to that question, and put ourselves in a position to be successful.” McDonald then said that the “S” stands for service. “This is kind of a big one for me. We’re going to be servants to our community, and also servants to the younger generation,” McDonald said. “If you look at this, myself included and these players, it’s a privilege to be at Georgia Southwestern. It’s not a right. I want our guys to understand that there’s a lot of people in this community and in this university that put in a lot into what they do, so the least that we can do is go back out and give our time to this community and be involved. My vision for this community, and the city of Americus is that I want our guys to be out involved so much that when a Tuesday night or a weekend comes, I want Georgia Southwestern Baseball to be the thing that people want to do.”

McDonald went on to say that he wants little kids to be at the field to get autographs, and then go home and tell mom and dad that they want to play at Georgia Southwestern one day.

“I think that’s the goal and vision of mine for this program,” McDonald said.

McDonald said that he talked with several of the players. He told them about what his expectations are for Georgia Southwestern, and that they need to be working on fulfilling those expectations. He also said that the recruiting process has started. “My recruiting philosophy is that you recruit through the middle of the field, starting with the catcher, through the pitcher, middle infielder to the center fielder,” McDonald said. “For this team, the main focus for me is pitching. I think that to win at this level and to win at a high level, you’ve got to be able to pitch and throw strikes and play defense.”

McDonald went on to say that he cannot speak for what happened at GSW between the time that he played here and now, but he reiterated to everyone in the room that his expectations are very high. They are to compete for a Peach Belt Conference championship and a national championship. He said that he wants to start winning right away.

Since 2007, GSW has had three winning seasons. Back in 2010, the Hurricanes had an overall record of 29-19 and went 12-12 in the Peach Belt Conference. New head coach Josh McDonald is primed and ready to bring winning baseball back to Georgia Southwestern State University.