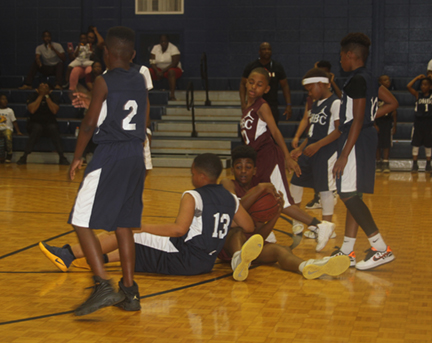 #13 Covery Hill of the 9-11u Jazz fights for the ball with a Cavaliers player. Photo by Ken Gustafson

AMERICUS – Monday night, June 4, was opening night for the Dwight Harris Boys Club Basketball Summer League at Ninth Grade Academy in Americus. The first game between the 9-11u Jazz and the 9-11u Cavaliers did not disappoint as the Jazz came away with a 201-18 overtime victory.

“I would like to give both teams applause all of the young guys played really hard. They didn’t give up. They went into overtime, and they played all the way to the end. Both teams were exciting and they did a great job,” Jazz head coach Reggie Jones said.

The first half was a very hard-fought half, with the Jazz owning a 9-8 lead at halftime. Jaylen Terry led the Jazz at the half with four points and Covery Hill had three at the half. For the 9-11u Cavaliers, they were led in first-half scoring by Jaden Tatum, who scored all of the Cavaliers’ eight points.

The second half was much the same as the first as both teams clawed and scrapped throughout the half. However, regulation was not enough. It would take overtime to decide the game. The Jazz were able to win the game in overtime 20-18. “We’ve got to work a little harder,” Cavaliers head coach Brandon Price said. “We had a pretty good game, but we need more heart. We didn’t play. We didn’t play with enough heart today.” 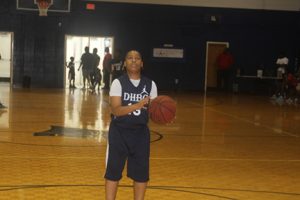 Covery Hill of the 9-11u Jazz shooting free throws.
Photo by Ken Gustafson

The Jazz were led in scoring by Jaylen Terry with eight points. Kingston Taylor and Covery Hill each had four points in the contest. Taylor hit a big jumper in the overtime period, which proved to decide the game for the Jazz. Ishmael Jones had three points. Caimen Williams had two points and Quay’shaun Taylor hit one free throw.

For the 9-11u Cavaliers, they were led in scoring by Jaden Tatum with 10 points. Brendon Covin scored six points, and Dekarkab Fletcher rounded out the scoring with two points.

The Dwight Harris Boys Club Basketball Summer League will continue every weeknight, with the 7-8u teams beginning at 5 p.m. That will be followed by the 9-11u Boys at 6 p.m. The 12-14u Boys take the court at 7 p.m., followed by the 15-17u Boys at 8 p.m. This schedule is Monday through Friday throughout June and July. Saturday games begin at 10 a.m. There will be six games on Saturdays, with the last game at 3 p.m. All games are played at Ninth Grade Academy, formally known as Staley Middle School.