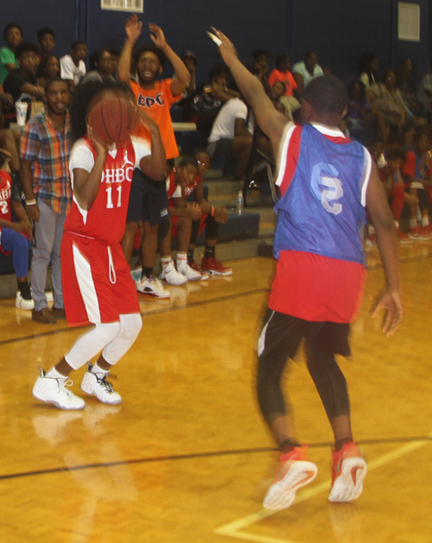 AMERICUS – The 12-14u Macon County Bulldogs boys’ basketball team jumped out to a 26-9 lead and held on to defeat the Sumter County Raptors 37-24 in the 12-14u game on Monday night, June 4. It was the first night of the sixth-annual Dwight Harris Boys Club Basketball Summer League.

The game, like all other DHBC games, was played at Ninth Grade Academy in Americus.

Raptors Assistant Coach Mike Russell Jr. coached the game in place of head coach Michael Volley, who wasn’t able to be at the game. Overall, Russell was pleased with the Raptors’ performance. “All the guys really gave a good, hard effort,” Russell said. “I know that the guys are very new, but it has to blend in well together. They will get a lot better throughout the season.” 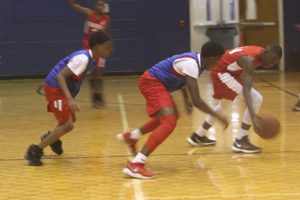 Kyric Davis with the basketball for the Sumter County Raptors.
Photo by Ken Gustafson

Carmelo Volley led the Raptors with seven points on the night. Both Kyric Davis and Devin Nash each had six. The Macon County Bulldogs jumped out to 26-9 lead in the early going of the game. However, the Raptors went on a 12-0 run to close the gap to 26-21 at halftime.

However, the Bulldogs took control in the second half and neutralized the offense of the Raptors. Macon County went on to win 37-24. 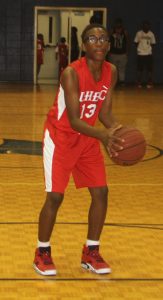 Daquan Brown led the Bulldogs with 12 points and Christopher Lake had eight in the winning cause. Both Jay Austin and Darius Collier each chipped in six points for Macon County. 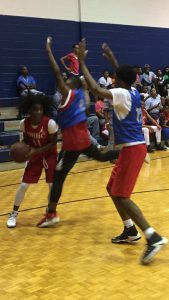 Macon County Head Coach Kenneth Hudson said that he hopes that more fans from Macon County will come out throughout the Summer and support Dwight Harris’s basketball summer league. The league goes through June and July. The playoffs for all the age groups begin on Thursday, July 19, with the championship games on Saturday, July 21. All league games will be played at Ninth Grade Academy.