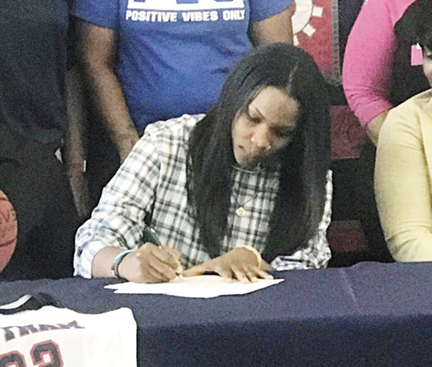 “I’m glad I have the opportunity to continue my career in basketball,” Pennamon said.

Pennamon played a significant factor in Putnam County’s successful 2017-18 season. The Lady War Eagles finished 20-5 on the season and earned a spot in the state playoffs. They lost in the first round to Model 70-64.

Pennamon was recruited by several colleges, including some form out of state. In the end, however, Pennamon decided to stay in-state and sign with SGT because it was close to home.

“This decision was really kind of hard to make,” Pennamon said. “Schools come at you really hard. Being able to still talk to my family is what made me want to stay in-state. I wanted my family to come see me work really hard to represent Putnam County.”

Pennamon recognizes that college basketball is much more fast-paced than high school. Therefore, she is spending a lot of time on the court practicing and in the weight room.

Pennamon is still deciding what her next move will be as far as her education is concerned. She is considering majoring in either sports management or criminal justice.

“I was told to just work hard and do what I do best,” Pennamon said. “I know my potential and I’m going to give it all I got.”