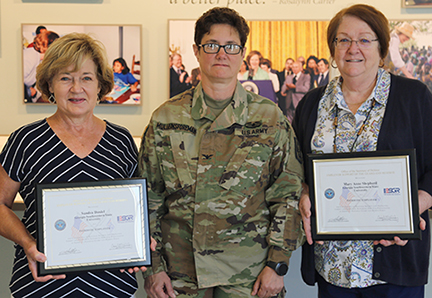 AMERICUS — Ramona Mulleins-Foreman, RN, DNP,FNP-C, Georgia Southwestern State University assistant professor, recently returned from a year-long deployment to Afghanistan and presented her supervisors with the Patriotic Employer Award. For their unwavering support before, during, and after deployment, she nominated Sandra Daniel, Ph.D., dean of the College of Nursing and Health Sciences, and Mary Anne Shepherd, DNP, assistant professor and FNP director.
The Department of Defense award, given by Employer Support of the Guard and Reserve (ESGR), is presented to individual supervisors who support soldiers through measures including flexible schedules and time off prior to and after deployment.
As commander of her new Forward Surgical Team unit in Paducah, Kentucky, Mulleins-Foreman had numerous things to prepare for her unit’s deployment, which required her to make the eight-hour drive every weekend. In addition to her pre-deployment responsibilities, she was still working as a full-time instructor.
“[People] would come by my office, and I’d have my government computer, my personal computer and my school computer all open,” she recalled.
This is where her supervisors and colleagues were able to step in and help when the school load became too overwhelming. They even allowed her to adjust her schedule because of the long weekend trips to Kentucky.
“They just really were working with my schedule. And there are a lot of employers who aren’t as supportive,” Mulleins-Foreman noted. Employer support enhances retention rates in the armed forces which strengthens national security, according to ESGR’s website.
“To be nominated and selected to receive this honor is deeply appreciated,” said Daniel. “It was a privilege to provide support to Dr. Mulleins-Foreman during her military deployment. In her absence, our faculty readily assumed additional workloads to ensure our graduate students received the best educational experience. We are grateful to Dr. Mulleins for her service to our military and certainly relieved that she has returned to us unharmed.”
The nursing faculty also showered Mulleins-Foreman with monthly mail and care packages during her deployment with anything from goodies, to books, even patriotic socks.
“They’d decorate the box with little sayings, like ‘thinking of you,’ ‘you’re in our prayers,’ or ‘you’re doing a great job.’ At Christmas I got ornaments that they’d signed. It’s really good to get stuff from back home.”
The West Virginia native enlisted in the army right out of high school and spent two years in Germany on her first duty assignment as a combat medic. In 2001, she went into the Army Reserves and attended college to be a veterinarian.
“I didn’t like being in the Reserves,” she recalled. “So, I asked, ‘What’s the quickest way to go on active duty?’ They said, ‘Become a nurse.’ So, I applied to the nursing program.”
Mulleins-Foreman attended nursing school at Salem State College in Massachusetts. In her 33 years as part of the Army Nurse Corps, she was previously deployed twice.
During her most recent deployment in Afghanistan, Mulleins-Foreman was promoted to colonel, a huge honor in the military. This rank is given to very few nurses and requires a minimum of 22 years of service, with three years as a lieutenant colonel.
“We call it ‘the wings,’” she said, pointing to the eagle rank insignia on her uniform.
Since she returned home in April, Mulleins-Foreman says her supervisors have continued their support during this transition.
“So that has been really nice” she said. “It’s always good to be back.”