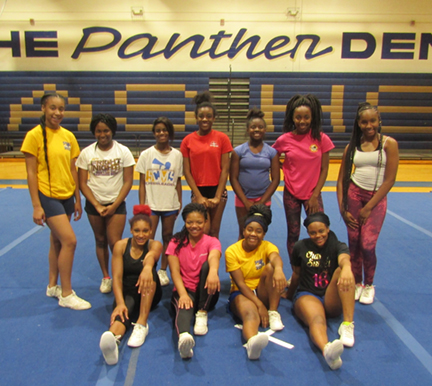 AMERICUS – In September 2018, Americus-Sumter High School will be resurrecting its varsity competition cheer program, and the members of the squad are currently having a competition cheer camp Monday through Friday, June 11-15, to get ready for the Fall season.

Alicia Green, Head Coach of the Competition Cheer Team, explained what the camp is all about. “This week, they’re learning their competition routines for the Fall,” Coach Green said. “Then after they learn the routines, they’ll actually practice the routines in July and August. Then in about September or October, they will actually start the competition. Competition for state will begin in November, then that will be the end of our competition season.”

“This is the first year to have competition cheerleading at the varsity level in about three to four years,” Green said. “We originally stopped having high school competition to start in middle school to allow those girls to have the time to get physically prepared for high school. Now that these girls have had competition before in tumbling, we’re now starting back in high school.”

According to Green, having the girls compete in middle school enabled them to get the experience they needed in tumbling and other skills they would need to have to compete at the varsity level. Green said that the girls have been competing at the middle school level for about three years now. This will be Americus-Sumter’s first varsity team to compete this Fall in about three to four years. According to Green, the middle school cheerleaders will be competing at the varsity level as well.

As far as when their first meet will be, Green said that she is looking at either September 15 or September 22, but the date hasn’t been set in stone yet. “Schley County is offering one at Georgia Southwestern State University, which we will be taking advantage of in October,” Green said. 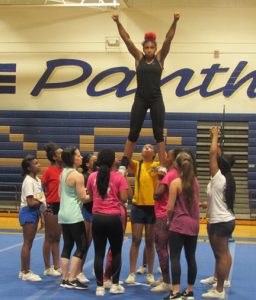 The ASH Varsity Competition Cheer Squad practicing a routine in which Madison Smith is lifted into the air.
Photo by Ken Gustafson

Mahogany Bridges, a rising junior, is a member of the new ASH Varsity Competition Cheerleading Squad. “I started doing competition cheerleading when I was in middle school. I did it with the Sumter County Gymnastics Academy,” Bridges said. “I really just want us to bond as a team whether we win or lose. We want to win, but whatever happens happens. I think we are going to work hard continuously so we can be where we want to be: the best.” Bridges teammate, rising junior Jazmyne Boyce, started competition cheerleading in eighth grade. She says she would like the team to come together and become sisters. “Our goals for this year are to become a sisterhood and to bond,” Boyce said. “Also, we are going to place in our competition and do the best that we can.”

Jessica Woodard, the team’s choreographer, has various styles of music and routines planned for the team that are suited to their abilities. “They have a mix of music such as current popular hip-hop and old-school rap music,” Woodard said. “Their choreography is just a mix of tumbling and gymnastics skills, as well as stunting from preps to one-legged stunts.” Woodard went on to say that skills such as scorpions, basket tosses, as well as tumbling skills ranging from back-hand springs to layouts and fulls will be performed by the team. “We will perform whatever skills that the girls have and can successfully do at their highest level of ability,” Woodard said.

Coach Green said that the team had a “spirit camp” on Thursday and Friday, May 31-June 1. The two-day event consisted of the team learning a routine for their Fall season, as well as cheers, chants and motions.

It’s been three to four years since competition cheerleading has been performed at the varsity level at Americus-Sumter High School. Once the team goes through the Summer workouts and the constant repetition of their routines and skills, their hard work should pay off come September, when their first competition takes place.