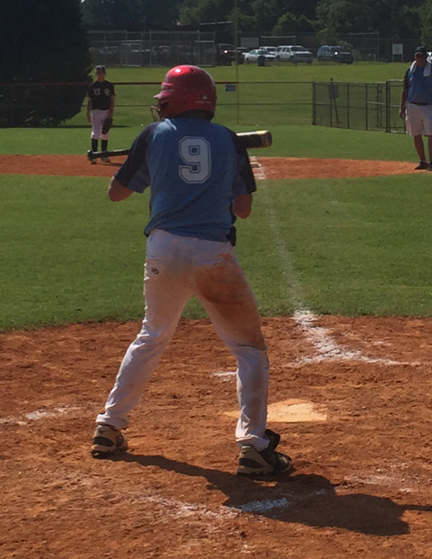 12u Sumter County All-Stars Catcher Will Godwin squaring to bunt. Godwin went 1-for-1 with a double, two walks and scored three runs. Photo by Ken Gustafson

AMERICUS – The 12u Sumter County All-Stars started out strong in the 12u Division of the Kiwanis Baseball Tournament played Friday through Sunday, June 8-10, at the SCPRD baseball fields. They won enough games in pool play to make it to the 12u Division semifinals. However, a three-run home run by Colquitt County’s Neko Fann, followed by a solo home run by Cam Cook, were both part of a six-run fourth inning that was too much to overcome for the boys from Americus. Colquitt County went on to win 8-5 and advance to the 12u championship game.

“This was our seventh day of playing,” Sumter County Head Coach Philip Exley said. “I really don’t think I can blame it on that. The boys hung in there and played. It did, but it did grind us down. I think we learned a lot about our biggest rival there for District. We learned a lot, and that’s what we’re going to take as a victory out of this…a lot of knowledge on how to play them in two weeks for the district tournament.”

Colquitt County got on the board quickly in the bottom of the first when R.J. Reynolds led off with a double. He would eventually score as a result of a base hit by Neko Fann and a couple of wild pitches. Fann was thrown out trying to advance to third base, then Cam Cook, who also singled and advanced on a wild pitch, was also thrown out at third for the second out. Colquitt County did have runners on first and second, but no further damage was done in the inning.

In the top of the second inning, Sumter County tied the score at 1-1. Will Godwin led off the inning with a double, advanced to third on a fielder’s choice by Luke Exley, then scored on a wild pitch. 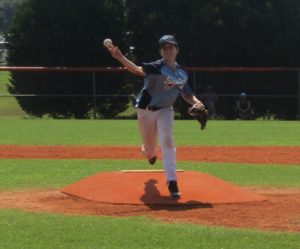 However, Colquitt County responded in the bottom of the third inning when Cam Cook hit the first of his two home runs in the game to give the boys from Moultrie a 2-1 lead. However, Sumter County starting pitcher Luke Exley struck three of the next four batters he faced to end the inning.

Sumter County responded in the top of the fourth with two runs to take a 3-2 lead. Fisher Britt led off with a double, advanced to third on a ground out by Perry Usher, then scored on a wild pitch. Will Godwin then drew a walk. Godwin would later score as a result a single by Luke Exley, coupled by a wild pitch and a fielder’s choice by Alex Jones. Anthony Tyson and Luke Tarrer both struck out to end the inning for Sumter County.

The bottom of the fourth turned out to be the undoing for the boys from Americus. Colquitt County scored six runs on four hits, including a three-run home run by Neko Fann. This was followed by a solo home run by Cam Cook, his second of the game. Colquitt County had taken an 8-3 lead. That would be all the boys from Moultrie would need to book their ticket to the championship game of the 12u Division.

Sumter County tried to make a comeback in the top of the sixth inning. Fisher Britt reached on an error to lead off the inning, and would eventually score on a couple of wild pitches. Perry Usher drew a walk and advanced on a wild pitch. After Luke Exley and Alex Jones both popped out. Anthony Tyson singled, driving in Usher for Sumter County’s fifth run of the game. Tyson advanced to third on the throw home to get Usher. Luke Tarrer was the last hope for Sumter County with two outs. He tried to keep the comeback going, but grounded out to end the game.

As for Colquitt County, they would advance to the 12u Championship Game to face Schley County, who defeated Lee County-Red 7-5 in the other 12u semifinal. 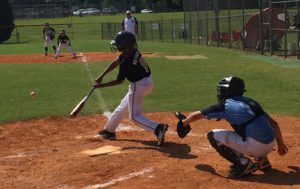 Colquitt County 12u All-Stars leftfielder R.J. Reynolds went 3-for-4 at the plate with two doubles, two RBIs and a single against Sumter County.
Photo by Ken Gustafson

Colquitt County leftfielder R.J. Reynolds had a tremendous day at the plate. Reynolds went 3-for-4 with two doubles, a single and two RBIs. Cam Cook went 3-for-3 with two home runs, one of them a three-run homer. For Sumter County, Will Godwin doubled, drew two walks and scored two runs. Fisher Britt went 1-for-3 with a double and scored two runs. Luke Exley went 1-for-3 with a single, driving in an RBI. Anthony Tyson was 1-for-2 with a single and was hit by a pitch. Sumter County starting pitcher Luke Exley struck out five batters against Colquitt County.

Sumter County lost to Colquitt County on Saturday, June 9, by the score of 10-8. They were scheduled to play another game in pool play, as every team in the 10u and 12u tournaments were guaranteed three games. However, thunderstorms came and rained out the rest of Saturday’s action.

The 12u Sumter County All-Stars will now get ready for the District Tournament coming up June 23.

As for the Sumter County 10u All-Stars, they got off to a rough start on Friday, June 8, losing to Albany Dixie 9u by the score of 14-0. However, they rebounded like champions on Saturday, June 9, defeating Baconton 14-13. Unfortunately for the 10u All-Stars, the rains came and their third pool-play game was canceled. They were not able to advance to the semifinals of the 10u Division. They will get ready for their District Tournament coming up June 23.