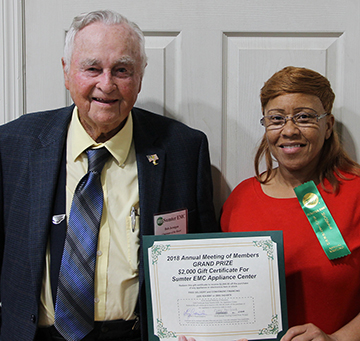 Bob Jernigan, Sumter EMC Chairman of the Board, presented Ethry Reliford from Preston with the grand prize, a $2,000 gift certificate to Sumter EMC’s appliance center.

AMERICUS — Sumter Electric Membership Corporation held its 80th annual meeting of members on June 9 at South Georgia Technical College in Americus. Members and guests were entertained by country music artist Brandon Wheeler with special guest Mike English. Total attendance, including 423 registered members, is estimated to have exceeded 700.
Following the recognition of special guests, Congressman Sanford Bishop updated the members on federal legislative issues that affect the daily lives of rural Georgians. He noted that he is fighting hard to make sure any regulation promulgated in Washington is based upon sound science, a cost/benefit analysis and plain common sense. He added that the USDA Rural Utilities Service, which provides loan funds to EMCs, was well funded in the 2018 fiscal year budget and that he will fight to preserve that funding for fiscal year 2019. Bishop concluded by saying that HB 1551, which will allow Oglethorpe Power Corporation to capitalize on nuclear tax credits, has been enacted into law and will result in great savings for EMC consumers.
President/CEO Ted McMillan addressed the members by first introducing Eddie R. Watson, the newest director on Sumter EMC’s board. Watson has worked and lived in Schley county for the past 33 years and is the owner of two funeral homes, Watson-Giddens in Ellaville and Watson-Tante in Buena Vista, as well as Watson’s Vault Company and Watson Farms. He was appointed in December 2017, to fill the vacancy on the board created by the untimely death of Charles Hart who represented Schley County.
McMillan then focused on one of the strongest attributes of the electric cooperative system, the commitment of EMCs to help each other during storms. This attribute was on full display when 13,000 linemen and other utility personnel — 1,500 from EMCs in other states — worked tirelessly to restore power in the wake of Hurricane Irma, which caused 550,000 power outages in Georgia alone. These remarkable efforts and the critical work line crews perform each day gave rise to the unveiling of the “Thank a Lineman” vehicle license plate, the state’s first Georgia vehicle license plate to honor linemen for their first response efforts.
McMillan mentioned potential changes to the Clean Power Plan and the continued diversification of the cooperative’s electric generation options, including additional utility scale solar resources. He touched on changes that technological advances in the areas of electric vehicles, drones and artificial intelligence will have on the electric power industry and touted the cooperative business model as uniquely suited to both take advantage of those changes and protect the members’ best interest at the same time.

McMillan dedicated the Annual Report in honor of director Chares E. Hart, who represented Schley County for 18 years and was serving as secretary/treasurer at the time of his death in July 2017. He then paid tribute to two retired directors who passed away in 2017 — H.K. Harp Jr., who represented Chattahoochee County for 44 years, and Ida N. Chambers, who represented Lee County for 22 years. He closed by thanking state and federal legislators for their ongoing support of issues impacting rural Georgians. 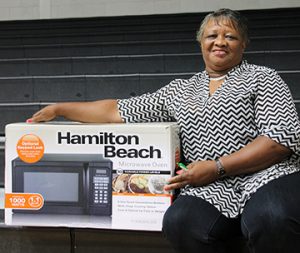