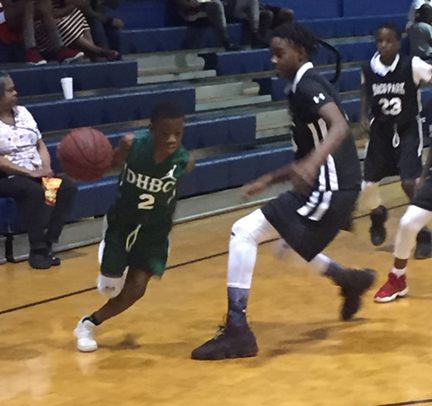 11u Celtics guard Corderian Leverrette with the ball against Macon County. Photo by Ken Gustafson

AMERICUS – On Wednesday night, June 13, boys ages 7-17 spent the evening having fun and sharpening their skills as they played games in the Dwight Harris Boys Club Basketball Summer League at Ninth Grade Academy.

From Monday through Friday, the league plays four games a night. The first beginning at 5 p.m. and the last one beginning at 8 p.m. On Saturdays, the games begin at 10 a.m., with the last game beginning at 3 p.m. 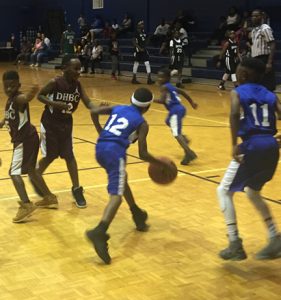 8u Warriors guard Cameron Watts dribbling the ball against the Cavaliers.
Photo by Ken Gustafson

Wednesday’s first game featured the 8u Division, with the Cavaliers playing the Warriors.  The game was lop-sided, as the Warriors won 23-2, but the Cavaliers fought extremely hard and gave maximum effort throughout the entire game. “They hustled. That’s all I want them to do is hustle and play defense,” Cavaliers coach Michael Wellborn said. “They’ve got to communicate. They’ve got to talk more. Other than that, they played good.” Aiden Robinson scored the only basket for the 8u Cavaliers. Demetrius Monts led the Warriors with seven points, and both Cameron Watts and Elijah Fuller each had five points. 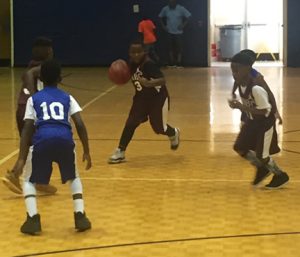 8u Cavaliers guard Kearsten Little dribbling the ball against the Warriors.
Photo by Ken Gustafson

It was time for the teams in the 11u Division to take the floor at Ninth Grade Academy. Wednesday night’s schedule featured the 11u Sumter County Celtics against the Macon County Bulldogs.  Macon County overwhelmed the Sumter County Celtics by jumping out to a 22-3 lead by halftime. The Celtics struggled to handle the pressure defense of the Bulldogs. Macon County forced the Celtics into committing several turnovers, which the Bulldogs converted into points. Macon County went on to win 40-11, but the Celtics played extremely hard and tried their best to withstand the onslaught of the Bulldogs. Jordan Hudson led Macon County with 14 points. Frankie Raines had seven and Eric Rice scored six points. Corderian Leverrette led the Celtics with five points. His brother, Cordero Leverrette, scored four and Aston Pope scored two points. 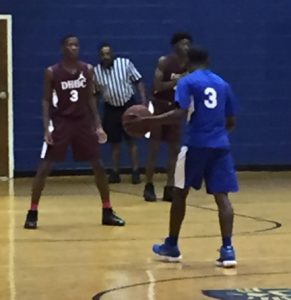 17u Warriors guard Jahim Banks (3) with the ball against the 17u Cavaliers.
Photo by Ken Gustafson

The Raptors stayed within striking distance for most of the second half. At one point, the Raptors trailed the Macon County Bulldogs 34-26. However, Macon County went on a 10-6 run, increasing their lead to 12 at 44-32. The 14u Raptors weren’t able to get back in the game, and Macon County went on to win 46-35. “I feel like we were outnumbered tonight,” Raptors head coach Mike Volley said. “There were two perfectly well-matched up teams. The guys played hard. They gave their all, but we were just outnumbered. They (Macon County) are a little bit more advanced. We’ve got work in practice we’ve got to tend to. When we get another shot at them, I think it will go a little better and we may end up winning.”

Macon County had two players in double-figures. Banks led the Bulldogs with 14 points and Landon Austin scored 13. Devin Nash led the Raptors in scoring with 12 points and Kyric Davis had seven.

The Warriors woke up in the second half. They went on a 13-2 run to tie the game 29-29. Jordan Wiley was instrumental in the comeback. He hit a three-pointer during the comeback. From then on, it was a back-and-forth affair. The Warriors took the lead at one point 44-42. However, the Cavaliers were able to edge out the Warriors 53-49. Luther Alford led the Cavaliers with 12 points and Jakontist Gordan scored 10. Both Quey Willoughby and Kanova Willoughby each scored nine points. Jordan Wiley scored 20 points to lead the Warriors. Six of those 20 points came from beyond the arc. Jahim Banks was also in double-figures, scoring 10 points for the Warriors.