Gaines scores 24 to lead 17u Rockets past Jazz

17u Rockets player Shomari Gaines scored 24 points to lead the 17u Rockets to a 63-55 win over the 17u Jazz on Thursday, June 14, in the Dwight Harris Boys Club Basketball Summer League. Photo by Ken Gustafson

AMERICUS – Shomari Gaines scored 24 points to lead the 17u Rockets to a 63-55 victory over the 17u Jazz on Thursday night, June 14, in the 17u Division of the Dwight Harris Boys Club Basketball Summer League at the Ninth Grade Academy.

Gaines was not the only Rocket in double-figures. Milton McCoy scored 17 points, 15 of those points came in the first half.

While Rockets Head Coach Corby Moore was pleased with the victory. He knows that his squad has plenty to work on and improve upon if they want to get to the championship on Saturday, July 21. “I think we came out kind of sluggish. We shot the ball kind of well. We need to do a better job of driving to the hole and making our layups,” Moore said. “We need to get back and play some defense. We’re too slow on the defensive end.”

In the 17u Division, teams play 20-minute halves, just like college teams do. The first half was a hard-fought half between both teams. The first few minutes of the first half was pretty evenly matched, with the Jazz owning a 13-9 lead with 9:32 to go. In the next four minutes or so, the Rockets outscored the Jazz 6-4 before timeout was called with 5:11 to go in the first half. At that point, the Jazz led 19-15. Neither team could build a big lead during the rest of the half, but the Rockets ended the half on top 28-25. Gaines scored 10 of his game-high 24 points in the first half and Owen Exley scored two points. 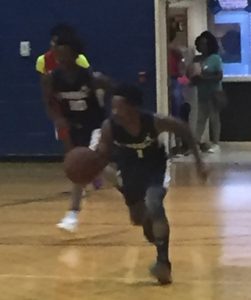 17u Jazz guard Jordan Taylor scored 20 points in the loss to the Rockets.
Photo by Ken Gustafson

As for the Jazz, Trontavious Robinson led the Jazz in the first half with 12 points. Jordan Taylor, who plays on the Schley County high school basketball team, had five points in the first half, but would heat up in the second half. Jacoby Brown scored four first-half points and both Von Bacon Jr. and Jarmeik Smith each had a basket in the first half. 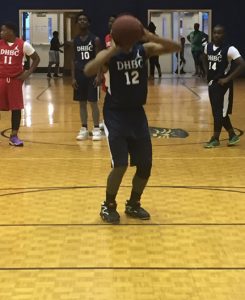 17u Jazz player Von Bacon Jr. at the free throw line. Bacon scored two points in the loss to the Rockets.
Photo by Ken Gustafson

Both teams picked it up in the second half. The Rockets went on a 9-3 run to start the second half, capped off by a basket by Kirrone Wilson to give the Rockets a 37-28 lead. As the half went on, the Rockets continued to maintain the lead. At one point, they led 43-36. However, Jordan Taylor scored seven unanswered points, including a three-pointer, to tie the game at 43-43. 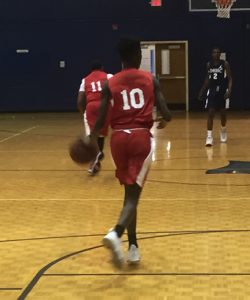 : Kirrone Wilson with the ball for the Rockets. He had four points on the night against the Jazz.
Photo by Ken Gustafson

The Rockets responded by going on a run of their own, but the Jazz were able to stay within striking distance, thanks to another three-pointer by Taylor to make the score 51-47 Rockets. Taylor had four three-pointers on the night for the Jazz. At one point, the Jazz were able to cut the deficit to four at 55-51. However, the Rockets went on an 8-4 run to close out the game, securing a 63-55 victory.

“We did a whole lot of things better than we’ve been doing,” 17u Jazz Head Coach Von Bacon Sr. said. “We made a lot of layups, a lot of mid-range shots. We’ve been stressing to the guys to take more mid-range shots than three-pointers. We made some of those. We got a couple of more rebounds, but we’ve just got to clean it up on defense. We’ve got to do a whole lot better on defense…more effort.” Jordan Taylor led the Jazz with 22 points and Trontavious Robinson had 17.