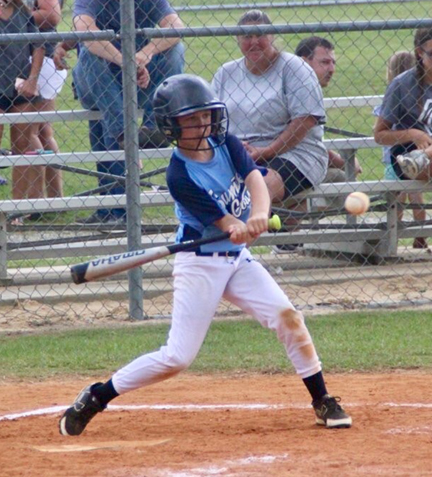 Sumter County lost to Fitzgerald 14-13 on Monday afternoon, June 11, but rebounded to demolish Wilcox County 25-1 later that evening. On Tuesday, June 12, the boys from Americus defeated Crisp County 15-5. However, they were defeated in the elimination game by Fitzgerald for the second time. They ended up finishing third in the tournament. Next up for the 8u Sumter County All-Stars is the District Tournament in Thomasville, which begins on Saturday, June 23. 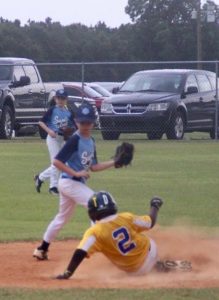 Second baseman Kyler Hoffman taking the throw from left fielder Charlie Kellam for the out at second.
Photo by Renae Barnes

In the team’s first game on Monday night at 7:15 p.m., left centerfielder Hays Hagerson and catcher Max Kelley led the Sumter County offense. They both went 3-for-4 in the 14-13 loss to Fitzgerald. In the 8:30 p.m. game that night, shortstop Noah Mixon was the leading hitter with two home runs and six RBIs, all coming in the second inning. Sumter County run-ruled Wilcox County 25-1. In the third inning of that game, Logan “The Hammer” Webb also added three hits and four RBIs in three at bats in the winning cause. 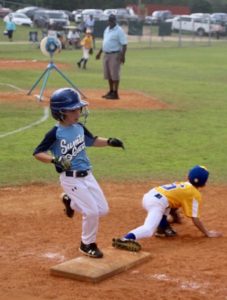 Logan “The hammer” Webb beating out a ground ball.
Photo by Renae Barnes

In the 5:30 p.m. game on Tuesday, June 12, Sumter County faced Crisp County. Sumter’s Mason Dowdey made several defensive plays up the middle to help the boys from Americus come away with a 15-5 win. First baseman William Webb went 6-for-7 with five RBIs, and second baseman Kyler Hoffman hit a home run. Left fielder Charlie Kellam added three hits of his own.

In the 8:30 p.m. game on Tuesday, June 12, Sumter County faced Fitzgerald for the second time in the tournament. Fitzgerald defeated Sumter county 14-13 on Monday. It was Sumter County’s chance for revenge. Sumter’s Wes Brock made a diving catch in left center field in the third inning to save three runs from scoring. Max Kelley went 3-for-3 against Fitzgerald. Third baseman Karvoris Edmonds made several defensive plays. However, Sumter County came up short once again against Fitzgerald. 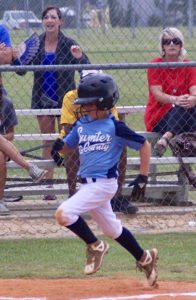 Noah Mixon scoring on his second home run of the inning.
Photo by Renae Barnes

“I’m very proud of how our boys have come together as a team,” Sumter County Head Coach John Mixon said. “We are fielding and throwing the ball on a high level. Most of our players are batting well over .500, with some players having batting averages well into the .800s.” 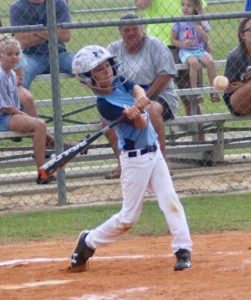 Charlie Kellam at the plate.
Photo by Renae Barnes

Mixon went on to say that he has to remind himself that these kids were all under eight years old when the season started because, in his words, it’s easy to lose track of that when you see how everyone has improved over such a short span of time.

“Our main focus over the next week and a half, while practicing for the district, is to better ourselves in throwing and fielding accurately,” Mixon said. “We want to eliminate base-running errors and turn some of these ground balls we are hitting into line drives that end up being extra base hits. In general, we need to come together more as a team.” 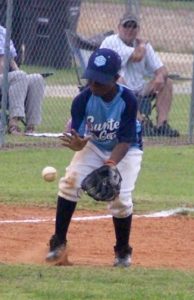 Karvoris Edmonds fielding a ground ball at third base.
Photo by Renae Barnes

Mixon went on to credit Assistant Coach Steve Brock in the development of the players. “We truly believe that we can play with anybody in the state when we are playing at our highest level,” Mixon said. “It’s hard to maintain error-free baseball at any level, but that is what separates the teams in 8u baseball from the ones who move on to the teams that go home early. We know the things that we have to get better at before we go to district. We’ve got to put our nose to the grindstone and get busy this coming week.” 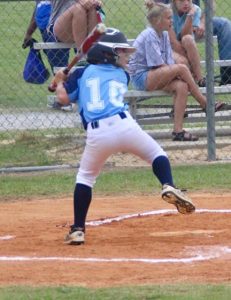 Hays Hagerson at the plate.
Photo by Renae Barnes

Mixon went on to say that his team has played 11 games during their regular season, counting the playoffs. “We have now played 11 baseball games in 11 days,” Mixon said. “You can see how much experience plays a big part in them improving.” That experience will be needed when the 8u Sumter County All-Stars take the field in Thomasville on Saturday, June 23, for the district tournament.