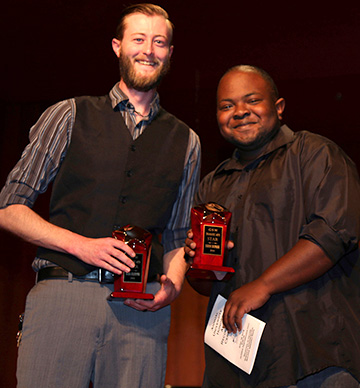 AMERICUS — Two dramatic arts students at Georgia Southwestern State University (GSW), Di’Jon Dupree and Mark Culpepper, are Las Vegas-bound this summer to attend the Stagecraft Institute of Las Vegas thanks to receiving highly competitive scholarships.
Stagecraft Institute of Las Vegas (SILV) is the first-of-its kind intensive training program for students from around the world to meet, learn from, and network with leading experts in live entertainment who are committed to sharing their experience with the next generation.
This is a once-in-a-lifetime opportunity for me and my future career,” states Culpepper, of Blakely. “SILV offers hands-on, professional work experience and classes with the very best designers in our field. It’s an amazing chance to market myself to some of the greatest minds in theater.”
“This achievement is a first for the Theater, Communication and Media Arts department,” said theater professor and department chair Jeff Green. “It’s a pretty remarkable thing.”
Dupree and Culpepper earned their scholarships by presenting their theater design work at multiple events over the past few months. Dupree, of Chauncey, will attend two weeks of classes in July, while Culpepper’s generous scholarship covers an extensive eight-week program through June and July. The summer courses include training in areas such as rigging, digital drafting, and automation.
The designs that earned the duo their places at SILV this summer were part of the departmental production The S.S. Glencairn Cycle in November 2017. The original script, based on the works of playwright Eugene O’Neill, was set entirely on an early 20th century British ship. Culpepper, a senior who has worked on over 30 shows at GSW, designed and built the set. Dupree, also a senior with over five GSW shows under his belt, curated and designed the sound for the show, including the music and ambient sounds that help bring the show to life.
Their work on the Glencairn Cycle earned Dupree and Culpepper inclusion in the Kennedy Center American College Theater Festival (KCACTF) Region IV’s 50th Anniversary Festival, held on GSW’s campus in February 2018. At the closing ceremony, Dupree was recognized for his sound design and was one of only 28 students from across the nation to be awarded the SILV scholarship by the Kennedy Center.
Culpepper was awarded his SILV scholarship at the Southeastern Theater Conference’s Annual Convention in March where he presented his set design.
In his first week at SILV, Culpepper was recognized as Most Outstanding Student for excellence in the field of digital drafting.
Culpepper plans to graduate from GSW in December 2018. He is currently the interim technical director at Theatre Albany. He plans to earn his master’s degree in technical directing and scenic design, and hopes to teach college theater in the south near his family.
In the future, Dupree hopes to own and operate his own performance space to give new ideas a place to grow.
Other awards:
• March 2018 — Culpepper earned Design, Technology and Management Honorable Mention at KCACTF Region IV’s 50th Anniversary Festival.
• April 2018 — Culpepper received Committee’s Choice Award in the Fine Arts category at GSW’s inaugural Undergraduate Research Symposium.
• April 2018 — Dupree and Culpepper recognized as Dramatic Arts Star Award winners at GSW’s annual Honors and Recognition Ceremony.