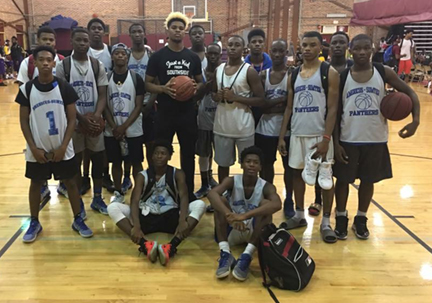 a picture of the ASH squad from the 2017 team camp at FSU. Photo by ASH

AMERICUS – Like just about all high school basketball programs around the country, there’s no sitting around for the Americus-Sumter Boys Basketball Team during the Summer. From Friday, June 15 to Sunday, June 17, the ASH team was at a camp at Florida State, where they competed against teams from Georgia, Florida, Alabama and other parts of the country.

Head Coach Michael Hoffpauir was extremely pleased with the progress his team made at the camp. “As always, the FSU Team Camp provides us with an opportunity to bond as a team,” Hoffpauir said. “We competed against some very good high school programs from across the country.” Hoffpauir went on to say that the ASH squad finished the camp with a 7-2 record, making it to the final four before losing to Gainesville (FL) High School. “Our other loss came on the very first game on Friday to a very athletic Crossroads Prep,” Hoffpauir said.

Hoffpauir went on to say that his team went on to defeat Marist from Atlanta and Confluence (MO) to close out the Friday session. On Saturday, ASH went on to defeat Leon (FL), Thomasville (GA) and Bartow (FL). On Sunday, the Panthers defeated Rutherford and Riverview before losing to Gainesville (FL) in the semifinals.

“Overall, I was pleased with the team’s performance. We are moving in the right direction by finding the right pieces and combinations on the floor that will improve our team performance,” Hoffpauir said. “Our top performers were Joshua Lusane and Traveon Brown.”

Hoffpauir went on to say that Michael Flemming has really shined this Summer and continuing that progress by playing great at the FSU Team Camp. Hoffpuair also singled out David Sumlin and Milton McCoy for their exceptional play during the camp.

“We look forward to the FSU Team Camp every Summer,” Joshua Lusane said. “It is fun for us to get away from home and play against some very good teams.”

Hoffpauir went on to say that the Summer schedule is very important for his club leading into the new basketball season. “We have to establish new leadership and many players have to take on new roles and responsibilities,” Hoffpauir said. “The coaching staff works very hard to ensure we get enough practices and games for us to evaluate the new team moving forward.”

Americus-Sumter will continue their Summer schedule Thursday and Friday, June 21-22, at a team camp at Mercer University. From there, the Panthers will head up to the Atlanta area to play some stiff competition at Tucker High School in Tucker, GA on Saturday, June 23.