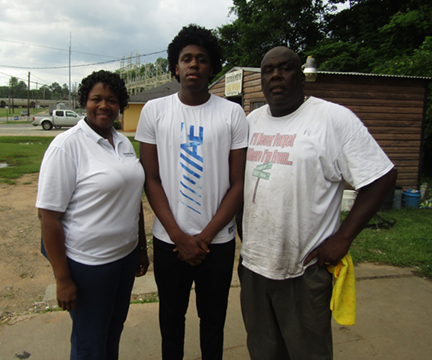 Americus – He’s one of the most talented high school basketball players in the state. He led the Americus-Sumter Panthers to the Sweet 16 of the state playoffs this past season. He’ll be a senior this coming Fall with hopes of leading his team to a state championship.

He’s Joshua Lusane. Born on January 11, 2001, he is the son of Marcus Lusane Sr. and Tiffany Lusane. According to Tiffany Lusane, Joshua started getting into basketball at the age of five or six. In addition to playing basketball, Lusane likes to play baseball and video games such as Madden NBA 2K, Fortnight and Major League Baseball. As far as academics are concerned, Lusane’s favorite subject is World History.

While Lusane may like video games and World History, basketball is his first love. Those who have watched him play for the Panthers know that he could have a future in basketball beyond the college level. He still has his senior year to go, and he has already accomplished a lot on the hardwood. Lusane made All-Region and All-State this past season. He averaged 15.2 points per game and 7.9 rebounds per game. He has attracted interest from several NCAA Division I schools such as Murray St., Troy University, Lipscomb and Florida A&M. However, Lusane would like to go to a certain school in Atlanta. “I would like to go to Georgia Tech if they offered me either a basketball scholarship or if I got accepted into the school,” Lusane said. He plans to become a computer engineer after he graduates from college.

According to his mother, there are a couple other talents Lusane has other than basketball: “He’s a great artist,” Tiffany Lusane said. “He draws very well and he writes very well. He doesn’t like to, but he really does those things well.” Lusane said that he likes to paint sports pictures, such as pictures of athletes.

Joshua Lusane is the second oldest of three siblings. His brother, Marcus Lusane Jr., is 18 and has just graduated from high school. They were teammates on the ASH Basketball Team. He has a sister, Lauren Lusane, who is 11 years old. 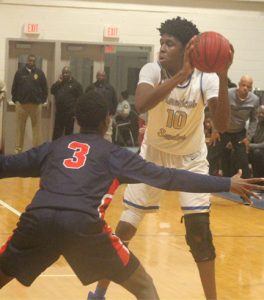 Americus-Sumter’s Joshua Lusane with the ball against Westover during the 2017-18. Lusane has potential for greatness.
ATR Archive

Like many high school athletes, Lusane was faced with adversity that he had to overcome. “He had a broken wrist. Some other kids were playing and ended up falling on him,” Tiffany Lusane said. “It kept him down for a while as far as him having a cast, but he came back strong and he didn’t let it hinder him. He just got right back into the game, doing the conditioning and everything that he needed to do.” Tiffany Lusane went on to say that Joshua was having trouble with his knee this past season, but it didn’t stop him from having a break-out game once he got healthy. “He had a break-out game in the particular game that he came back,” Tiffany Lusane said.”  She went on to say that he was out five to six weeks, but had a break-out game against Crisp County once he came back.

According to Lusane, ASH Head Coach Michael Hoffpauir has meant a great deal to his growth and development. “He’s a great coach. He’s a good leader on and off the court,” Lusane said. “He has helped change the community around Americus since he’s been here. Hopefully, I can get him the state championship that he wanted this year.”

While he is proud of his son’s accomplishments, Marcus Lusane Sr. believes that Joshua Lusane can be an even better player with more work. “I think he needs to have more of a work ethic,” Mr. Lusane said. “He’s very talented, but it’s going to take a lot of work to get to the next level. He’s sort of doing it now on raw talent, but he needs to grind every day.” Mr. Lusane went on to say that Joshua goes to the AAU camps, but believes that he still needs to be conditioning himself. “I think that if he can get himself stronger, he’ll be an extremely good player. He’s already a good player now, but in order to get to the next level, he’s going to have to get himself strong. It’s going to be up to him.” Mr. Lusane went on to say that Joshua is a very talented player, but needs to put more time into it.

Lusane said that he believes that what he does best in basketball is shooting and passing the ball, as well as being a student of the game.

With more work and dedication, the sky is the limit for Joshua Lusane. It will be exciting to see what things he will accomplish on the Americus-Sumter hardwood when the first tip-off begins in November.