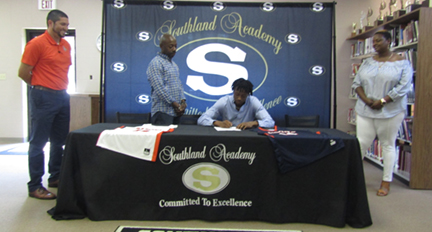 Batten was recruited by Tabor College, a school in Kansas, Florida Tech and South Georgia Tech, but chose to sign with the Barons.

“When I visited, I really liked the campus and the coaching staff. The people were very friendly,” Batten said when asked why he chose Brewton Parker.

Batten set a school record with 153 free throws made and made All-State in both his junior and senior year. Batten was also selected to play in the All-State Senior All-Star Game. During his senior year, he averaged 21 points per game and over six rebounds a game.

“I think he has kept the program at the level that we’d like to keep it at,” Southland Head Coach Rundy Foster said. “We’ve been very successful in the past and he’s been an integral part of what we’ve accomplished these last two years. He’s led us in scoring this past year and in free-throw attempts. He’s led us well these past two years,” Foster continued. 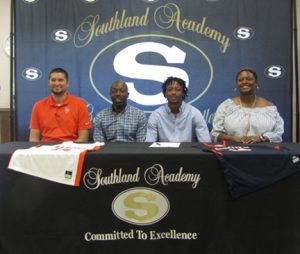 In the 2017-18 season, the Raiders finished 19-7 on the year and made it to the second round of the GISA Class AAA State Tournament before losing to Holy Spirit Prep 73-38. In that game, Batten led all scorers with 23 points.

Batten was a pleasant surprise to Brewton Parker Head Coach Daniel Prevett. Prevett, who serves as Athletic Director for the school, has taken over as Head Coach of the Men’s Basketball Program. “To be honest with you, I was a little surprised because I didn’t start his recruitment. I just took over this program about two months ago,” Prevett said. “I really didn’t know a whole lot about Siage other than what I was told.” Prevett went on to say that when he got to see Batten play in an on-campus work out three weeks ago, he was very impressed. “I told my assistant: ‘That kid has got a lot of potential. He’s going to do a lot for us’. As a freshman, it’s hard to play at the college level. There’s a lot to learn,” Prevett said. “The speed of the game is a lot different, but there will be an opportunity. He’s got the talent. He’s got the size, and he fits well with what we want to do. We like to play fast. We like athletes. We like guys that like to attack and he does all of those things.  I think he will fit in well with what we are going to do.” 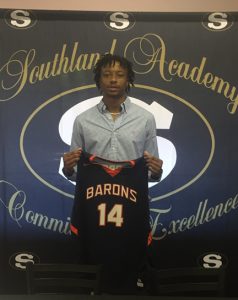