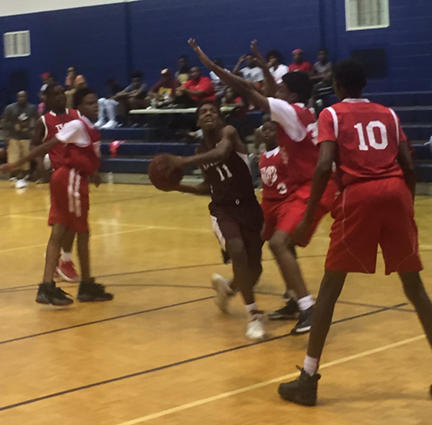 14u Cavaliers guard Elijah Westbrook drives to the basket. He sank one of two free throws in overtime to win it for the Cavaliers. Photo by Ken Gustafson

AMERICUS – With just seconds on the clock and the score tied 49-49 in overtime, 14u Cavaliers guard Elijah Westbrook made one of two free throws with just seconds left to give the 14u Cavaliers a 50-49 overtime win over Macon County Wednesday night, June 20, in the Dwight Harris Boys Club Basketball Summer League played at Ninth Grade Academy.

The 14u Cavaliers had a chance to win the game in regulation. With 1.7 seconds to go and the score tied 42-42, Cavaliers guard Javin Lewis was fouled while attempting to shoot a three-pointer. Unfortunately for Lewis, he missed all three free throws and the game went into overtime.

Macon County started out quick in the overtime period, scoring five unanswered points to take a 47-42 lead. However, the Cavaliers fought back, going on an 6-2 run to cut their deficit to 49-48. The Cavaliers were able to get the ball back with time running out. Demetrice Hurley was fouled while shooting. Hurley made the first free throw to tie the game, but missed the second one. However, Elijah Westbrook got the offensive rebound for the Cavaliers. At that point, the score was tied 49-49 with just a few seconds left. Westbrook missed the first free throw, but made the second one to give the Cavaliers a one-point lead. The Macon County Bulldogs threw up a desperation shot at the buzzer, but it was no good. The 14u Cavaliers escaped with a thrilling 50-49 overtime victory. 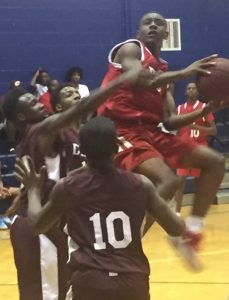 The Cavaliers jumped out to a 9-0 run to start the game. However, Macon County roared back with a 9-2 run of their own to cut the Cavaliers’ lead to 11-9. The Cavaliers responded with a 13-6 run, extending their lead back up to nine at 24-15.

Macon County would not go away, however. The Bulldogs went on an 8-2 run, capped off with a basket by Daquon Brown.

The remaining minutes of the second half went back and forth. Macon County’s Amarien Shelley hit two three-pointers down the stretch during regulation to give the Bulldogs the lead at one point. The Cavaliers were able to retake the lead and extend it to 40-35 in the waning minutes of regulation when Hurley drove to the basket and scored. However, the Bulldogs went on a 7-2 run to force overtime.

Both teams played tenaciously on defense, forcing each team to commit numerous turnovers. It would come down to clutch free-throw shooting. Westbrook was able to nail the second of two free throws in overtime, giving the Cavaliers the hard-fought 50-49 win.