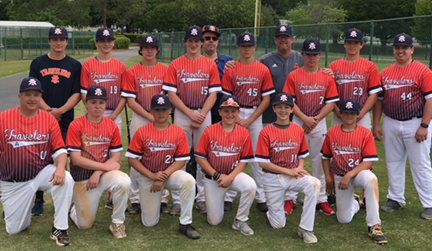 AMERICUS – Sumter County Parks and Recreation Director Tim Estes realized back in 1995 that college and pro baseball scouts weren’t coming to South Georgia to scout players, so he decided to do something about it. He formed a traveling baseball team called the Americus Travelers.

“It was the Summer of 1995. It was, at that time, an 18-under program,” Estes said. “It was part of the Americus-Sumter County Parks and Recreation Department at that time.” Estes went on to say that he and others noticed that college coaches and pro scouts weren’t coming to South Georgia to scout when they could go to the metro area and see several prospects in one place.

“It was really put together with the intent of taking local talent, making a team and going to where the majority of those coaches and scouts would be so that they could get exposure,” Estes said.

Estes went on to explain that right now, the Americus Travelers are a 13-under team. They develop this team for the next four years. After that four years is completed, they have a high school-age team. This process repeats itself every four years.

As far as when their season starts, Estes said that for the high school-age team, it would begin in late May. “With the younger middle school kids, like we have this year, being that their middle school seasons are completed at the latest in mid-April, we started April 21 this year,” Estes said. “It just depends on the age of the kid as to when we start.” 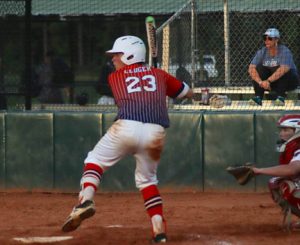 Chase Ledger at the plate for the Travelers.
Submitted Photo

Estes went on to explain that for the last six years, he and Jeff Fussell get a group of kids at age 13. “We follow that same basic group up a year every year and throughout their high school career,” Estes said. “We just got through last year with a group that was 17 and under that we had since they were 13,” Estes said. “Now this year, we’re starting over with a new group of 13- year-olds, and our plan is to follow them throughout their high school career.”

Estes said that once the kids get to age 17, then they will complete that 17-year-old season and start forming a new 13-year-old team. The players on the team develop and hone their skills every year. They receive high-level training and coaching. The hope is that by the time each player reaches the age of 17, they will be ready for the college or pro level.

The team travels to a lot of tournaments and plays teams from all over the Southeast. “The goal is to have four or five seasons where they’re learning to compete at an even higher level every year so that by the time they’re 17, they’re hopefully playing at a college level, or at least a junior college level, so that they’re able to get some scholarship money to go play baseball at the college level.”

The idea is to develop players into college-caliber, or possibly even pro-caliber players so that college and pro scouts will want to come down to this area to recruit these players.

Estes went on to say that American Legion Baseball is still pretty big in Alabama, and when his team gets to be 16 or 17 years of age, they will probably play some Alabama and Florida American Legion teams.

Chase Ledger is a 13-year-old who plays on the Americus Travelers team. He plays third base, catcher and pitcher. Ledger says he has really enjoyed the experience. “It’s been quite well,” Ledger said. “The level of competition we play has been higher than what I’ve played in past years. The coaching level is higher. They know what they’re talking about and they try to get the best out of you.”

Estes said that the team has a pre-season training camp. “Since all of these kids are coming from eight different schools throughout Southwest Georgia, it’s hard to practice on a regular basis,” Estes said. “In the pre-season, we have a three-day training camp. Once we get them together for the training camp, we can put in things like our bunt coverages, how we’re going to run first and third. All of your specialty situations is what we do at training camp.”

Estes went on to say that as far as game schedules, the team plays in a tournament every other week. “The weeks that we don’t play in a tournament, they’ll come here and practice,” Estes said.

The Americus Travelers are currently 22-6 on the season. According to Estes, the team has won two of the seven tournaments they’ve played in. “We’ve been in the semifinals of three of those tournaments, so we’ve made it at least to the final four in five of the seven tournaments we’ve played in.” Estes went on to say that the Americus Travelers have won the “Bring the Heat” Tournament, which was played on Saturday and Sunday, May 5-6, as well as the Grand Slam Southeast Regional Tournament, which was played Friday through Sunday, June 1-3. Both tournaments were in LaGrange, GA. “We’ve played in one USSSA tournament in Statesboro. It was actually a 14 and under tournament. We played up an age division,” Estes said. “We made it into the finals of that tournament and lost in the finals to Eagle Baseball Academy.”

According to Estes, the schedule for the World Series tournament, to be played in Panama City, Florida, came out Monday, June 25. The team will play the North Mississippi Grays from Zonotic, Mississippi on Tuesday, July 3, at 8 a.m. CST. The Americus Travelers will then take on the Texas Patriots from Spring, Texas later that day at 10:05 a.m. CST.

Chase Ledger, who plays third base, catcher and pitches for the Travelers, had never played catcher before this season. “With the strength of his arm and the size of his body, we felt like he could help us back there and he has really done a great job behind the plate,” Estes said.

Estes went on to say that one of the really neat things, now that his club has been competing for a long time, is seeing what some of the former players and coaches are doing now. “We had Chris Howell, who is the Head Baseball Coach at Augusta University right now. He was a former shortstop and pitcher for the Travelers,” Estes said. “We had Joe Lamb, who is the Director of Baseball Operations for the Atlanta Baseball Academy. We’ve got a lot of former players who are now good husbands and good fathers. Most of the kids who have played for us in the past have turned out to be good citizens.”

Estes went on to say that the Travelers have played teams from the nationally-known East Cobb program in Marietta, GA. “One of my fondest memories of the Travelers was playing an East Cobb team,” Estes said. “I think they were called the East Cobb Chargers at the time. They had Corey Patterson, who played with the Chicago Cubs. He was their center fielder. Jeff Keppinger, who played shortstop at the University of Georgia and went on to play shortstop for the Milwaukee Brewers.” Estes went on to say that the Travelers have faced former Atlanta Brave Jeff Francoeur. “We faced him as a pitcher, believe it or not,” Estes said. “One of the neatest things, and I guess this would have been 2005, was when we played against Jason Heyward. The team he played for actually beat us in the AAU State Championship that year. It’s been kind of fun to play against some of these kids that you see them four or five years later in pro ball.”

Estes went on to say that the Travelers tried to recruit Buster Posey, who is from Lee County, but at the time, he played his Summer ball with the Savannah Chain.