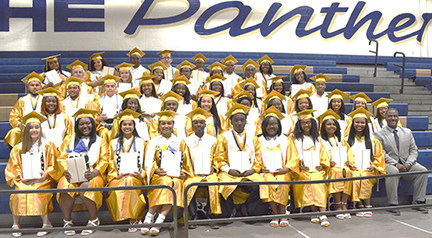 Each of the 45 Honor Graduates in the Class of 2018 at Americus-Sumter High School were awarded an ipad.

AMERICUS — During the 2018 Baccalaureate service, Kimothy Hadley, principal of Americus-Sumter High School, again surprised the Honor Graduates with a gift of an iPad.
In his presentation, Hadley reminded the students that, “We don’t ever stop learning; technology is a tool that will help you continue your pursuit of knowledge throughout life.” He encouraged the students to use the iPads in a positive way to help them as they begin the next phase of their life.
Hadley became the principal at the Americus Sumter High School in July 2013, and immediately began looking for ways to encourage all students to be successful in school as well as in life. Each year Citizens Bank of Americus presents a very generous gift to ASHS. Hadley began looking for ways to use the money to encourage students to push just a little harder in high school, so he requested that the Citizens Bank Incentive be used to purchase the Honor Graduates an electronic device for college/post-secondary school. In 2014, 36 honor graduates received an iPad mini. You could hear the shrill of excitement as the students were told of the gift. In 2015, the number increased to 38 honor graduates. Then in 2016, the number increased to 42. In 2017, 44 iPads were awarded. With the 2018 graduation, there were 45 honor graduates. Beginning in 2016, the names of the Valedictorian and Salutatorian was engraved on their iPad; now each iPad is engraved with the student’s name and ASHS Honor Grad and class year. The number has increased each year
Hadley feels that this program has encouraged the students to work harder to achieve Honor Graduate status.Congratulations to the Class of 2018.
ASHS honor graduates, including the class valedictorian and salutatorian are determined by the students’ cumulative numeric grade average (CNGA) at the conclusion of the third nine-week period in a student’s senior year. The CNGA represents the average of all grades earned in high school, grades 9-12. Honor graduates are students whose CNGA is 90 or higher. The ASHS class of 2018 valedictorian is Prerana Kumar. The ASHS class of 2018 salutatorian is Jasmine Dew. The school’s honor graduates are as follows.
Peter Nordwall, Tamiya Durham, Charity Brown, Charlotte Schopen-Davis, Ny’keria Walker, Trevyn Gray, Kailia Youngblood, Jovan Sykes, Lewis Myers, Carlos Hernandez, Ryan Mournighan,
Kaebren Price, Chelby Davis, Jamyiah Bateman, Taylor Jackson, De’Shun Iverson, Yolanda Stevens, Destinee Young, Kaniya Little, Caleb Hagler, Brianna Worth, Tameia Moore,
Kali Green, Tremayne McPherson, Anniya Barron, Malcolm Mercer, Jason Trujillo, Kydaisha Bridges, Justin McRae, Danika Tyson, Darren Davis, Otis Tookes,
Ka’nijah Foster, Taylor Bacon, Hector Lepiz, Jasmine Oliver, Mikal Douglas, Jasmine Jordan, Donterrious Watts, Serenity Patterson, Yesenya Garcia, Ta’mya Sims, and Quanakissia Sutton.