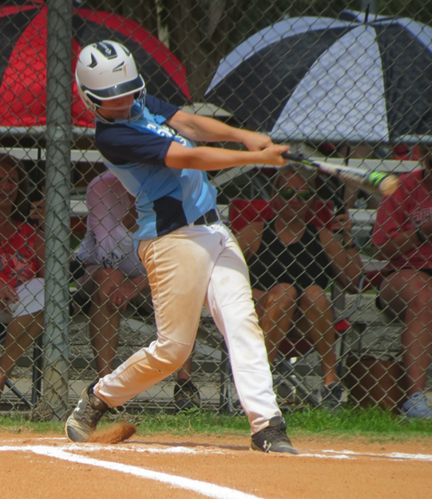 Luke Exley at the plate for Sumter County during the 12u District Three Tournament in Moultrie. Submitted photo

MOULTRIE – The Sumter County 12u All-Stars traveled to Moultrie for the District 3 Baseball Tournament on Saturday, June 23. It was a round-robin format between Sumter County, Crisp County and Moultrie. Sumter County run-ruled Crisp County 20-0, but fell to Moultrie 7-6. However, being that the top two teams advance to the Georgia Parks and Recreation Association (GPRA) State Tournament, the boys from Americus will be going.

In Game 1, Sumter County faced Moultrie in a tough match-up at 9 a.m. Perry Usher started on the mound for the boys from Americus and had a solid first inning. He retired the side on a ground out to short, a strikeout and a fly out to left field. Sumter County batters took advantage in the bottom of the first inning by scoring four runs off walks and wild pitches, while sending eight batters to the plate. 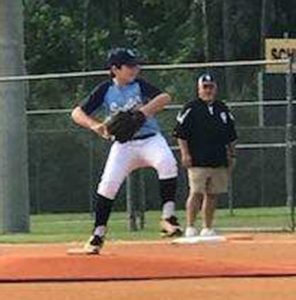 Sumter County’s Perry Usher was the starting pitcher for Game 1 against Moultrie in which Sumter County lost 7-6.
Submitted photo

In the second inning, each team scored one run, making the score 5-1 in favor of Sumter County. Moultrie threatened in the third inning when Cam Cook was hit by a pitch from Usher. Cook attempted to steal second base and made it safely on an overthrow from Sumter County catcher Will Godwin. Cook tried to score when Sumter centerfielder Anthony Tyson overthrew third base. However, Travis Pennington made a heads-up play by backing up the throw and gunning down Cook at the plate, thus ending the scoring threat from Moultrie.

Moultrie’s Nico Fann added a solo home run in the fourth inning, but Sumter County responded by adding a run of their own in the fifth.

The game entered the sixth and final inning, with Sumter County leading 6-2. The boys from Moultrie mounted a rally in their half of the inning by loading the bases on a combination of hits and walks. Moultrie’s Eli Hannah was at the plate with two outs and two strikes. However, Hannah belted a grand slam home run over the right center field fence to tie the game at 6-6. Moultrie scored the go-ahead run to take the lead 7-6 before Sumter County ended the rally. 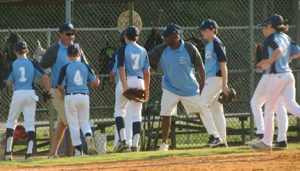 Now it was time for the boys from Americus to come through with some heroics in the bottom of the sixth. Sumter County was able to load the bases for Luke Exley. However, Exley’s line drive to left field was caught to end the game, giving the boys from Americus a 7-6 heartbreaking loss. “It was a tough loss, but I’m very proud of these boys,” Sumter County Head Coach Phillip Exley said. “Perry Usher pitched a great one. Our defense was solid and we showed discipline at the plate with an understanding of the strike zone. We fought to the very end and, unfortunately, ended up on the losing end of a great ball game.”

Now, it was do or die for Sumter County. They didn’t have time to wallow in self-pity, nor did they. Quite the opposite, they rebounded like champions and took their frustrations out on Crisp County in the second game at 11 a.m. Sumter County took care of business in this game, run-ruling the boys from Cordele 20-0. Will Godwin had a two-run homer in the second inning and Alex Jones belted a double off the center field fence. Luke Exley started on the mound for Sumter County. He pitched two full innings as Sumter County manhandled Crisp County 20-0. The win qualifies Sumter County for the GPRA 12u State Tournament, which will be played in Moultrie Tuesday through Friday, July 10-13.