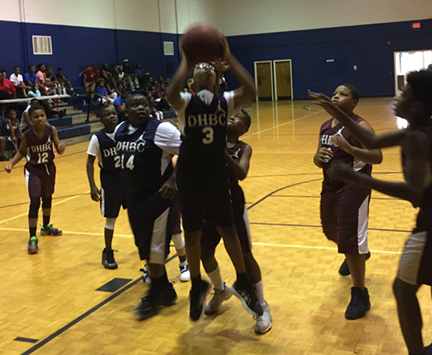 Jaden Terry of the 11u Jazz gets a rebound. He scored nine points in their win over the Cavaliers in the Dwight Harris Boys Club Basketball Summer League. Photo by Ken Gustafson

AMERICUS – Two games in Wednesday night’s play at the Dwight Harris Boys Club Basketball Summer League stood in stark contrast to each other. Game 1 of the night featured the 8u Warriors overwhelming and manhandling the 8u Cavaliers 29-2. Game 2 was a bit more competitive as the 11u Jazz edged out the 11u Cavaliers 32-29. Both games were played Wednesday night, June 27, at Ninth Grade Academy.

In the 8u game, Jarmaine Curry led the Warriors with 14 points as they took control early and never looked back on their way to the 29-2 win over the 8u Cavaliers. “They (8u Warriors) played hard. We preach about playing hard,” Warriors coach Dometrius Monts Sr. said. “They came out and played good defense. We were able to get some layups. We were able to win pretty easily today.” 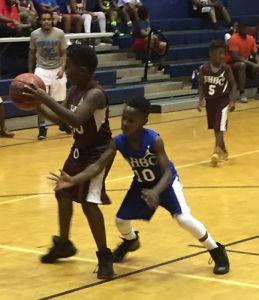 8u Cavaliers guard Ayden Robinson with the ball guarded by Tyran Smith of the Warriors.
Photo by Ken Gustafson

The Warriors went on an 11-0 run to start the game. Both teams played extremely hard, forcing turnovers by each other. Unfortunately for the Cavaliers, they just weren’t able to put the ball in the basket until the second half when Ayden Robinson scored their only basket of the game. 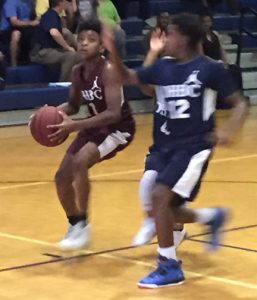 The 11u Cavaliers guard Jaden Tatum with the ball being guarded by Chris Luster of the Jazz. Tatum scored 12 points to lead all scorers.
Photo by Ken Gustafson

In the 11u game between the Cavaliers and the Jazz, it was close all the way. The Jazz got off to a 4-2 lead to start the game. However, Brenden Covin hit a three-pointer and then scored on a layup to put the Cavaliers up 7-4. For the rest of the first half, it was a close battle, with the Jazz leading 13-11 at the half. 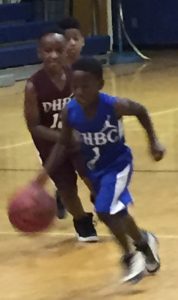 : Jarmaine Curry with the basketball. He scored 14 points to lead the 8u Warriors past the Cavaliers.
Photo by Ken Gustafson

A few minutes later, Tatum scored to get the Cavaliers to within four points at 28-24. As the game was winding down, the Warriors had a 32-29 lead. The Cavaliers had the ball with seconds left to tie the game. However, Jaden Tatum’s desperation three-pointer at the buzzer fell short and the Jazz came away with a hard-fought 32-29 victory.